The University of West Florida honored more than 175 students at the 29th annual Student Leadership Awards Banquet, hosted by the Division of Student Affairs on April 9 in the UWF Conference Center and Ballroom. 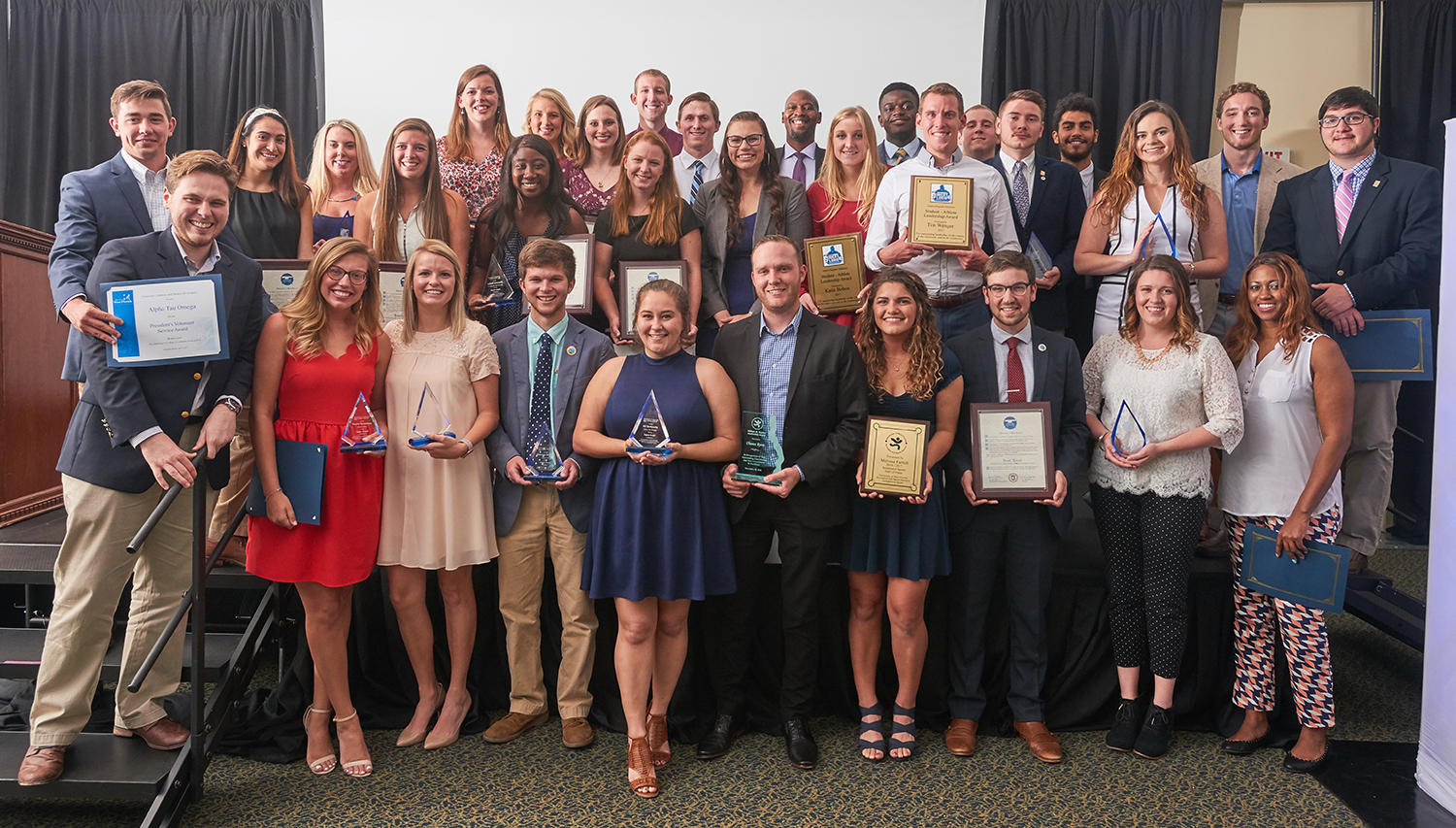 The division presented 14 awards recognizing students for various achievements, including completing thousands of hours of community service and embracing leadership roles that benefit the campus and community.

Awards for Sustained Leadership and Service

Englund was honored for sustained service to the University Commons Service Desk and Ticket Center, The Voyager student newspaper and her sorority, Alpha Gamma Delta. She earned particular distinction for empowering and developing other students.

Friday was acknowledged for his involvement in multiple campus organizations, in particular for his service as the chief student leader of ArgoCamp, the Student Ambassadors program and his fraternity, Sigma Alpha Mu. He will continue his service to college students after graduation as a leadership consultant for his fraternity.

Jacob Hebert, president of the Student Government Association, received the Hal Crosby Leadership Award. Named after the University’s founding president, the award honors a graduating senior whose sustained leadership and service to the campus and community leave a substantial and positive impact. Hebert became the first UWF student to serve on the Florida Board of Governors when he was elected chair of the Florida Student Association in May 2016.

Dr. Rebecca Kennedy, assistant vice president of student affairs and director of UWF Counseling and Psychological Services, awarded sophomore Leonie Dupuis with the Deborah L. Ford Emerging Leader Award. Named after a former vice president for student affairs, the award is presented annually to a freshman or sophomore who demonstrates a genuine commitment to the University, specifically in the area of student life.

Dupuis is the president and founder of the UWF chapter of She’s the First, an organization founded to promote girls’ education in developing countries. Dupuis is actively involved with SGA and the Kugelman Honors Program.

Robin Zimmern, associate dean of students, recognized senior Timothy Jones with the Outstanding Student Leader Award, given to a junior or senior who demonstrates a collegiate record of leadership and service to the University and campus life.

Jones is active in UWF MEN, Tau Kappa Epsilon and the Student Veterans of America. He is also a professional speaker and facilitator with a focus on veteran homelessness and sexual assault prevention.

Dr. Brandon Frye, dean of students, presented Amanda Haggard with the Outstanding Graduate Student Leader Award, recognizing a collegiate record of leadership and service to UWF and the Pensacola community. As president of the Graduate Student Social Work Organization.  Haggard advocated for and worked to serve youths, women, veterans and members of the LGBT community, and connected GSSWO members to professional development and licensure preparation opportunities.

William Vittetoe, director of International Programs, presented Hunter Werenskjold with the Global Citizenship Award for his efforts supporting international students at UWF and, in the words of his nominator, “embodying the belief in togetherness instead of otherness.”

Bobos led the women’s basketball team to a historic season, becoming the all-time leading rebounder at UWF. She also serves as a tutor and mentor for other student athletes and regularly volunteers in the Pensacola community.

Bill Healey, director of Recreation and Sports Services, inducted students Melissa Farrell and Chris Taylor into the Intramural Hall of Fame. Farrell played more than 120 games for approximately 34 teams while at UWF, winning championships in flag football, volleyball and soccer. Taylor won championships in volleyball, flag football and basketball, participated in the National Flag Football Tournament and participated in every intramural sport offered at UWF. Both were commended for their sportsmanship and service as intramural sports officials and staff members.

Healey also presented Alan Moore, president of the Handball Club, with the Sport Club Leader of the Year Award.

Chance Ryon received the William M. Healey Leadership Award, named for the recreation director, and was given a $500 scholarship. The award honors a recreational sports participant or employee who demonstrates leadership, sportsmanship and integrity while advancing the mission of Recreation and Sports Services.

Eleven student organizations and 91 individuals were honored for their community service with the President’s Volunteer Service Award, created in 2003 by the President’s Council on Service and Civic Participation under President George W. Bush “to recognize the valuable contributions volunteers are making in our communities and encourage more people to serve.”

Collectively, students in these organizations recorded more than 8,800 hours of community service in 2016. These organizations included chapters of the University’s Fraternity and Sorority Life, the Kugelman Honors Program and academic student organizations. Students who completed 25 hours of service or more were recognized individually for their contributions.

For more information about the Student Leadership Awards, visit uwf.edu/sla.