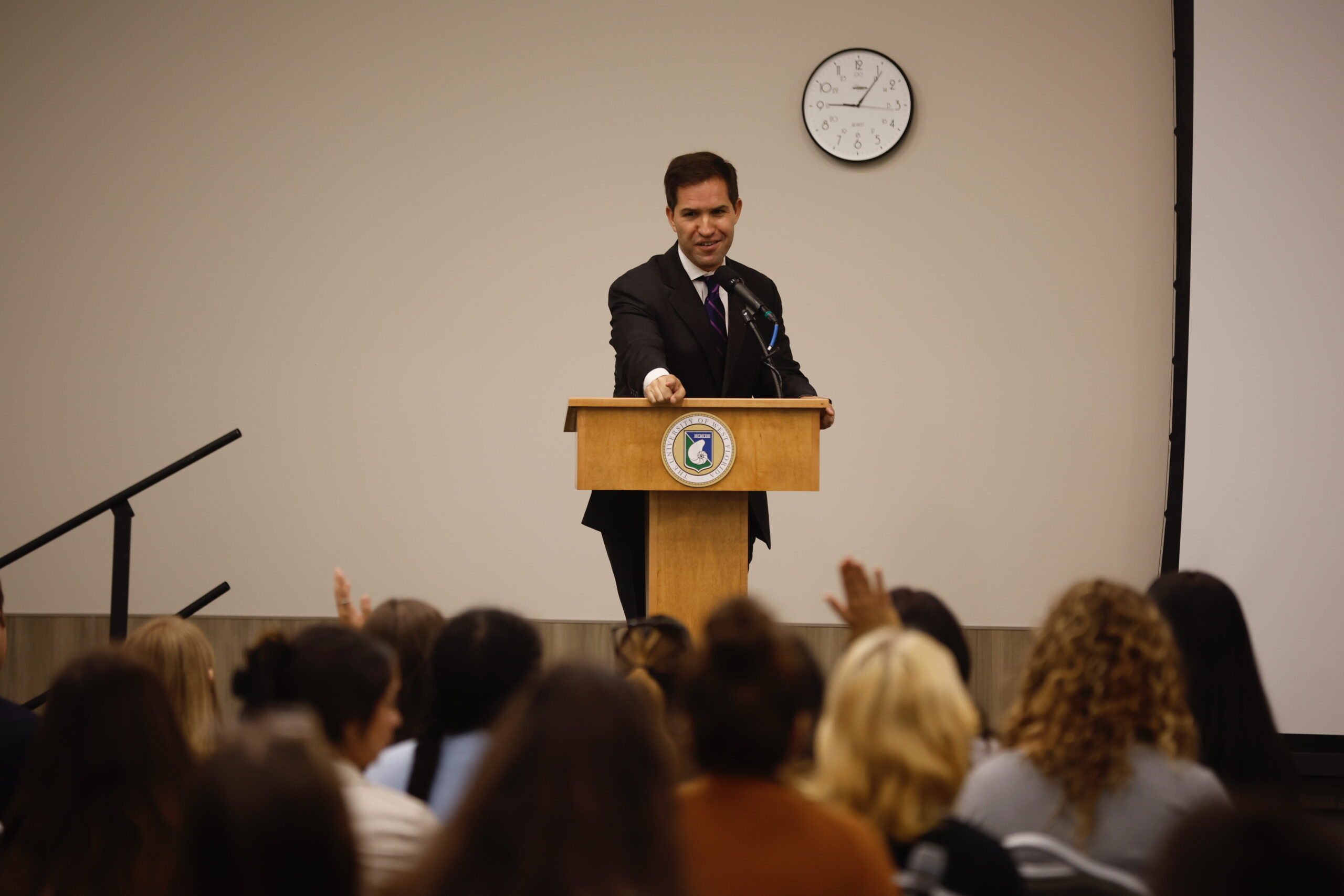 Couriel addressed UWF leadership, regional legal community partners and legal studies students about the legitimacy of court systems and the public’s perception of their fairness.

Couriel pointed to America’s shift to seeking community through social media rather than face-to-face interactions as being a key factor in the questioning of the wisdom of what the courts decide and their very legitimacy.

“We are lacking a sense of rootedness that used to be almost nameless,” Couriel said. “It was a sense that a place had your back; that you were proud of it; and willing to live in a way that took care of that place. Politics has swollen to fill that space vacated by community. It has replaced the old ways we used to find out where our neighbors were, physically and metaphorically. Instead, we rely on politics to tell us who we are, and critically, who we aren’t.”

Couriel said a misunderstanding of the purpose of the court leads to public mistrust.

“The legitimacy of a court depends not even a little bit on our agreement with its decisions,” Couriel said. “The legitimacy of a court depends upon our assent to the role it plays, and the roles it cannot play, in our government. As judges, our job is to settle disputes between people. We say what the law is, and in that task, we resist the urge to say what the law ought to be. The Constitution gives that role to citizens, acting through their elected representatives.”

Following his speech, Couriel welcomed questions from UWF’s legal studies students. He encouraged students to read constantly and to pursue mentors who can foster their progression in the legal field.

“The legal profession is a noble and legitimate calling,” Couriel said. “No one has ever had a better idea than the U.S. Constitution. It is an honor to defend it.”

Junior legal studies major Brayden Tompkins said Couriel’s path to becoming a Florida Supreme Court Justice and his views on the role of the courts in our society made a big impact on him.

“I feel our courts are really partisan right now, but after hearing Justice Couriel, it renews my faith in the nonpartisan court system,” Thompkins said.

Charlie Penrod, associate professor of legal studies, said the opportunity to listen to a sitting Florida Supreme Court Justice is something most undergraduates do not get the chance to experience.

“Having someone of his stature visit UWF and speak with our students is something our legal studies and other pre-law students will never forget,” Penrod said. “I have no doubt that Justice Couriel’s wisdom and insight into the practice of law will serve as a springboard for many students’ journey towards law school.”

Couriel received his bachelor’s degree from Harvard College in 2000 and his juris doctorate from Harvard Law School in 2003. Throughout his career, he has served in private practice litigating issues of securities, mergers and acquisitions, bankruptcy matters, international law and cross-border disputes. In 2009, he became an Assistant United States Attorney for the Southern District of Florida and prosecuted hundreds of federal offenses. Justice Couriel is a native speaker of Spanish. His parents emigrated from Cuba in the 1960s, his father as one of approximately 14,000 unaccompanied minors welcomed to the United States as part of Operation Pedro Pan. Couriel was appointed to the Florida Supreme Court by Gov. Ron DeSantis in June 2020.

Couriel’s visit to UWF was the first by a Florida Supreme Court Justice and is a reflection of UWF’s emergence as a hub for the regional legal community as well as a force in law-related education.

UWF’s Bachelor of Arts in Legal Studies program, housed in the College of Education and Professional Studies, prepares students for law-related careers and provides a foundation for law school and other graduate education. It was ranked number one by Best Value Schools for Best 11 Bachelor’s in Legal Studies 2021.