The University of West Florida hosted its Spring 2018 Commencement Saturday, May 5 at the Pensacola Bay Center. Addressing approximately 1,500 graduates, UWF President Martha D. Saunders commended the students’ achievements and contributions to the University. 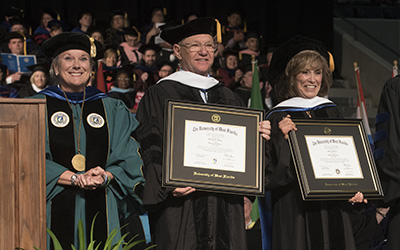 The University of West Florida hosted its Spring 2018 Commencement Saturday, May 5 at the Pensacola Bay Center. Addressing approximately 1,500 graduates, UWF President Martha D. Saunders commended the students’ achievements and contributions to the University.

“We are very proud of our students and their accomplishments,” Saunders said. “Today we join with their professors, families and friends in recognizing their hard work and determination. They are part of a spirited community of learners who will change the world.”

“UWF was so accommodating to my unique situation,” Watford said. “The University allowed me to participate in orientation a month early so that I wouldn’t have to wait to enroll in online courses and accepted all the credits I had earned from other colleges, allowing me to complete my degree so quickly.”

Watford joined the Air Force Reserve and plans to attend graduate school to continue her education.

Pensacola philanthropists and business leaders Quint and Rishy Studer were recognized for their achievements and leadership. Saunders named each of the Studers an Honorary Doctor of Letters. The honorary doctorate degree recognizes distinguished performance and is regarded as the highest form of recognition a university can bestow.

“It is an honor and privilege for the University to recognize two outstanding community leaders,” O’Sullivan said. “The Studers’ commitment to their community and UWF is exceptional and these degrees are an appropriate reward for their hard work.”

Quint and Rishy Studer have focused their gifts and investments on community-based philanthropy, job creation and educational attainment. Through their corporate work to improve healthcare for patients in Pensacola and around the world; investment in Pensacola’s downtown historic district, waterfront and the Double-A Pensacola Blue Wahoos minor league baseball team; and philanthropic work to publicly and privately assist families in need, the Studers play an integral role in Pensacola’s growth and development.

Quint Studer is the founder of the Studer Community Institute, a nonprofit, research-based entity started in 2014 with the goal of improving the quality of life in the community. SCI’s efforts focus on improving education and economic development through three tracks: research and advocacy in early childhood education, leadership training and employee development for small and medium-sized businesses and increasing civic knowledge and engagement. In his new book, “Building a Vibrant Community,” he addresses the what and the why, but also provides a blueprint for how a community can get from where it is now to where it wants to be.

Rishy Studer devotes her time to community development in the Pensacola area. She has been a driving force in the revitalization of historic Pensacola’s urban areas. Projects have included rebuilding a turn-of-the-century property now occupied by the Bodacious family of shops, which Rishy Studer oversees.

Longtime supporters of UWF, the Studers helped to establish the UWF Center for Entrepreneurship in the College of Business, thanks to a $1 million gift in 2015. Quint Studer serves as entrepreneur in residence at the Center, guiding Northwest Florida business owners and entrepreneurial students. Since 2012, the Studers have funded the Pensacola Pledge Scholars Program, providing scholarships for graduating high school seniors in Escambia and Santa Rosa County to attend college locally, either at UWF or Pensacola State College. Most recently, the Studers gifted a $150,000 Interactive Early Learning Playground to UWF, which will be located at Museum Plaza, a historic preservation and education initiative in Historic Pensacola.