The University of West Florida robotics team finished second place in the annual IEEE SoutheastCon hardware competition, held April 19-22 in Tampa, Florida. The team’s autonomous robot was only seconds slower than that of the winning team from University of Alabama. 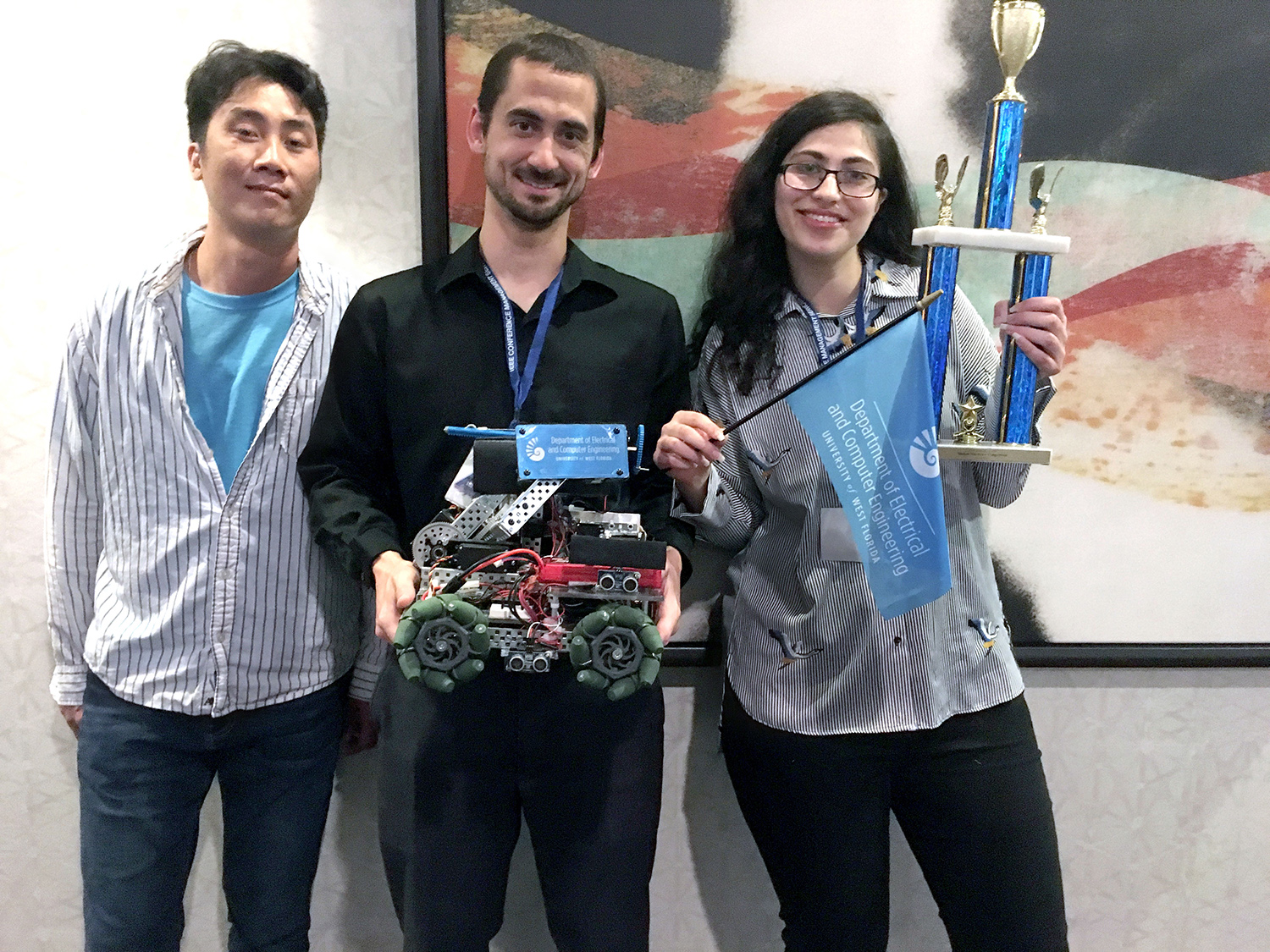 The team, comprised of graduating seniors Asma Al-Selwadi, Steven Lewis and Oanh Nguyen, came in first during the qualifying rounds and completed all required tasks in the championship match.

According to Al-Selwadi, this year’s competition required a fully-autonomous robot to simulate the role of a pirate, with the purpose of reading a treasure map and successfully completing its journey to retrieve the treasure chest.

The robot was initially placed onto its “pirate ship,” where it received an infrared signal to determine which one of the eight possible paths the robot would follow. The robot was required to complete mechanical tasks, such as pushing a button, applying pressure to a pad, raising a flag and finally lifting and storing the “treasure chest” and bringing it back to the ship.

“We’ve benefited from UWF as we are allowed the independence to create and implement projects of our own efforts and designs, which provides us a much higher level of understanding than that of undergrads in other engineering programs,” Al-Sewaldi said.

The team’s accomplishments were especially impressive considering UWF had the smallest team, with only three members. The second smallest team had more than double its members. Dr. Mohamed Khabou, professor and chair of the Department of Electrical and Computer Engineering, mentored the team.

“By mentoring these smart, hard-working students, you establish a strong bond with them. They not only consult you on technical issues, but they also seek your advice on their professional aspirations,” Khabou said. “This is not the first time a UWF robotics team placed above far bigger schools in this competition.”

Khabou attributes the team’s success to the rigor of the Department of Electrical and Computer Engineering curriculum, emphasis on hands-on learning within the program and continuous mentoring provided by UWF faculty who set high expectations of their students, encouraging them to try multiple solutions and not to be afraid of failure.

​“We are producing quality ECE graduates who can go against any other graduates in the nation and we have the data to prove it,” Khabou said. “Whether it’s winning national or international competitions, a much better performance than the national average of ABET programs on the professional engineer exam or the very positive feedback from both local and national employers, ECE graduates are proving themselves in different ways and highlighting the solid education they got at UWF.”

IEEE serves as the trusted voice for engineering, computing and technology information around the globe. SoutheastCon is an annual technical professional and student conference for IEEE Region 3, encompassing the southeastern U.S. and the country of Jamaica.

For more information about the UWF Department of Electrical and Computer Engineering, visit uwf.edu/ece.