The University of West Florida robotics team finished second out of 41 teams in the annual Institute of Electrical and Electronics Engineers SoutheastCon hardware competition, held April 11-14 in Huntsville, Alabama. 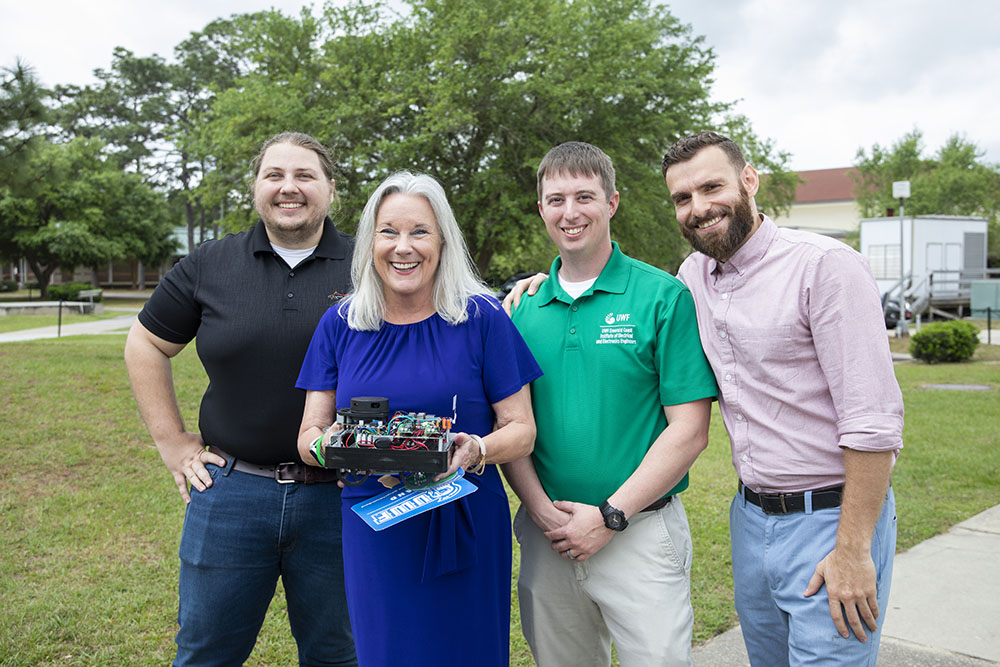 The team was comprised of UWF Emerald Coast students Dustin Williams, Andrew Petrovsky and Michael Wagner. Dr. Andreas Fuchs, lecturer for the Department of Electrical and Computer Engineering, served as the team mentor.

“UWF’s team consisted of only three undergraduate students and competed against much bigger teams from well-known engineering programs,” said Dr. Mohamed Khabou, professor and chair of the electrical and computer engineering department and interim director of the Ph.D. program in intelligent systems and robotics. “Winning second place against these teams is proof that UWF is producing top-notch engineering graduates. Out of the 41 participating teams in the competition, the judges singled out UWF and two other teams with praise for their innovative design and hardware implementation.”

The work on the autonomous robot started a year ago and went through numerous iterations until the team was satisfied with the final design.

“We’re proud of how these students represented UWF,” said Dr. Jaromy Kuhl, interim dean of the Hal Marcus College of Science and Engineering. “The skills gained at the IEEE competition will follow them into their studies and, eventually, their careers.”

IEEE serves as the trusted voice for engineering, computing and technology information around the globe. SoutheastCon is an annual technical professional and student conference for IEEE Region 3, encompassing the southeastern U.S. and the country of Jamaica.

For more information on the UWF Department of Electrical and Computer Engineering, visit uwf.edu/ece.