The University of West Florida held its Spring 2013 Commencement ceremony today at the Pensacola Bay Center, where a total of 1,632 students received bachelor’s, master’s, specialist or doctoral degrees. 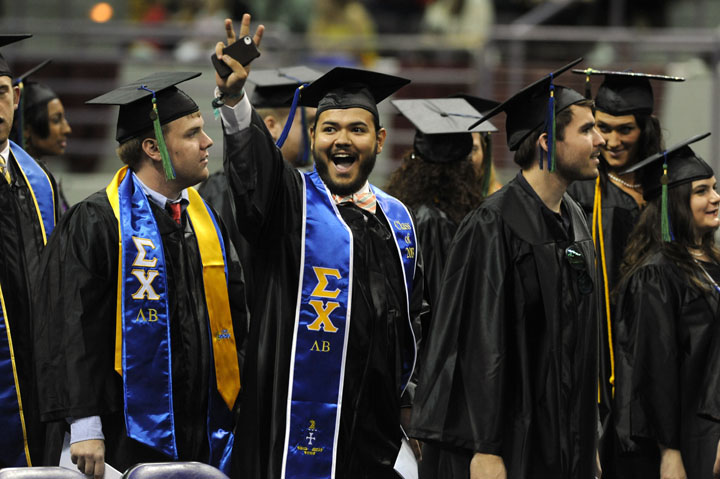 President Judy Bense addressed the graduates, recognizing them for being an essential part of the university’s current and future success.

“The contributions you make in your work and life as servant leaders, professionals, entrepreneurs, public officials and community members will shape your story and the history of UWF,” she said. “You are the future of our institutional history.”

Among the graduates was Terry Sutherland, an 82-year-old Azalea Trace resident who received a bachelor’s in studio art. To stress the importance of continuing education at any age and provide an example for his grandchildren, Sutherland has earned five degrees: a bachelor’s in engineering and a bachelor’s in electrical engineering from the U.S. Naval Academy; a master’s in manpower management from George Washington University; and an associate’s in real estate from Gulf Coast Community College.

Craig Lockhart, Honors Council President, received his bachelor’s degree in international studies, with a specialization in security and diplomacy. During his time at UWF, Lockhart served as an Argo Scholar Mentor and Honors Mentor and participated in a number of student organizations, including the Phi Eta Sigma Honor Society, Phi Kappa Phi Honor Society and the Collegiate 100 Black Men of Pensacola. He was awarded the Irvis Fellowship to attend the University of Pittsburgh in August, where he will pursue a master’s in public and international affairs. Lockhart, who was born in Dominica, West Indies and moved to Hollywood, Fla. when he was 10, said his long-term goal is to become a diplomat for the U.S. Department of State.

The keynote speaker, Dr. Michael Summers, was named an Honorary Doctor of Science during the ceremony. Summers, a 1984 graduate of UWF, currently serves as a Professor of Chemistry at the University of Maryland, Baltimore County, and a Howard Hughes Medical Investigator. Summers’ scientific research focuses on understanding how retroviruses, specifically HIV, assemble, in hopes of finding a cure.

Summers is also a tireless advocate for the Meyerhoff Scholars Program at his institution. The program increases diversity among future leaders in science, technology, engineering and math (STEM) related fields. He stays connected to UWF by identifying quality students to continue their studies and research alongside him at the University of Maryland, Baltimore County. He is currently working with Joshua Brown, a UWF alumni who is pursuing his doctorate of medicine and Ph.D.

Bense also presented Bruce Cheves, Weighmaster of the annual Destin Fishing Rodeo, with the UWF Presidential Medal of Honor. The award, established by Bense in 2012, is given to individuals who have distinguished themselves by their actions and have contributed in some manner to the wellbeing of the university and the geographical region, primarily through public service and philanthropy.