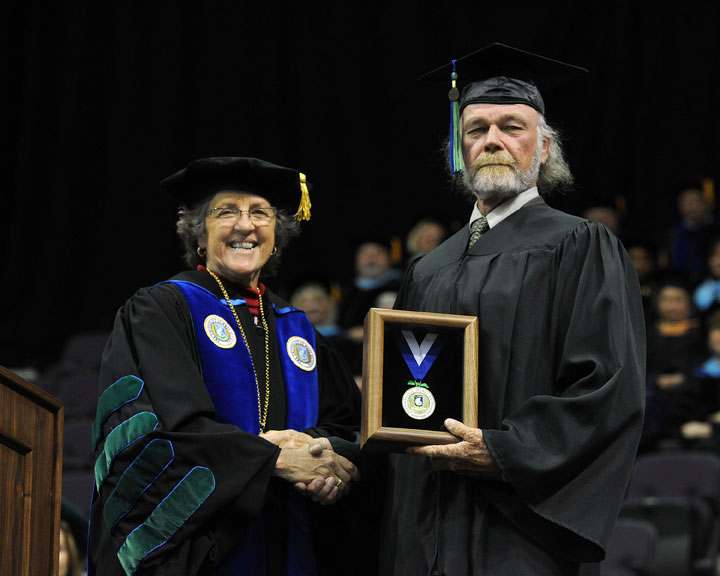 Among the UWF Emerald Coast graduates was Tom Schwingle, a 66-year-old Mary Esther resident who received a bachelor’s in criminal justice. Schwingle originally started his college education in 1966 and served in the U.S. Air Force for 22 years. He is a UWF Emerald Coast employee, and serves as a mentor to fellow colleagues as well as his children, grandchildren and great-grandchildren.

Another graduate, John Filleau III, received his bachelor’s degree in electrical engineering. During his time at UWF, Filleau was president of the Institute of Electrical and Electronics Engineers (IEEE) student chapter and involved with Alpha Sigma Lambda National Honor Society. Filleau was recognized as the UWF Electrical Engineering Outstanding Student and attributes the majority of his success to serving six years in the U.S. Air Force. He was awarded a Fellowship to attend Carnegie Mellon University in August, where he will pursue a Ph.D. in electrical engineering, specializing in control systems.

During the ceremony, President Judy Bense presented Destin native Bruce Cheves with the UWF Presidential Medal of Honor. Cheves has served as the Weighmaster of the Destin Fishing Rodeo for the past 25 years.

The award, established by Bense in 2012, is given to individuals who have distinguished themselves by their actions and have contributed in some manner to the wellbeing of the university and the geographical region, primarily through public service and philanthropy.

Cheves was recognized for his long-standing service within UWF’s service region as he promotes Destin’s heritage and educates thousands of locals and visitors about fishing, maritime history and local legends. He has initiated programs that introduce and promote fishing among kids, particularly those from disadvantaged situations. In 2010, the city of Destin honored Cheves by naming Oct. 16 “Bruce Cheves Day.”

As Bense presented the award, Bense recognized Cheves for his dedication to serving Destin and the Northwest Florida region.

“Cheves’ knowledge of the Gulf, marine life habits and habitats, various world records and his recollections of local history, legends and dockside personalities are deep and impressive,” Bense said. “His service to the Destin community is unsurpassed and worthy of recognition.”