Junior business major Amy Bueno is one of 12,000 students 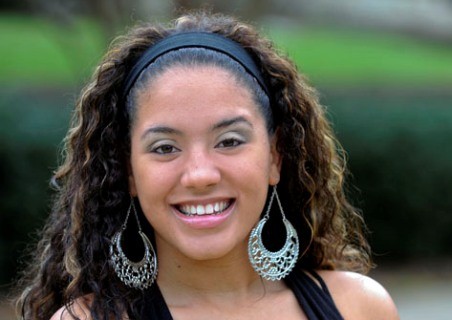 Carrying a grocery store bag of food and hurrying down the hall, Amy Bueno breathlessly entered the SGA office to speak about her life and experiences as a first-generation college student. Bueno is the first person in her family to attend college, and is one of six students selected to represent the University of West Florida’s student body and celebrate reaching the goal of 12,000 students.

She apologized for her tardiness, and then breathed a sigh of relief once she realized she was a few minutes ahead of schedule.

“That’s my lunch,” she said, pointing to the grocery bag. “I think I’ll have time to eat it later.”

Bueno, a junior business major at UWF, explained that she stays busy and is used to cramming the necessities of life into scattered, spare minutes of the day.

Her life has not always been so busy, she said. Her parents are from the Dominican Republic. She was born in New York, and shortly thereafter moved to Tampa, Fla., where she spent much of her childhood. She soon began feeling the need to pursue a college education and decided that UWF was the best choice for her.

“It was hard work,” said Bueno. “I took the initiative and applied early. I also took my senior year of high school very seriously and treated it as the next step in the rest of my life.”

It has not been easy for Bueno, who has had to persevere through financial hardships, such as working two jobs to afford the cost of living and schooling, separation from her family and adjusting to life in an unfamiliar city. She said ambition and motivation are tough things to fake, and the stressful lifestyle is sometimes hard to maintain, but she knows it will be worth it.

Bueno said that she knows her family is proud of her and supports her, but it is difficult only seeing them once every three to four months.

“There have been a lot of times I’ve been tempted to give up,” said Bueno. “But I look at my parents and my brother, and they give me the motivation and determination that I need. They’re my number one supporters.”

Bueno has been actively involved in campus life since arriving at UWF. She is chief of staff to the president in SGA and finds that it is a great way to be immersed in the collegiate experience.

“In high school, SGA was always something that appealed to me,” said Bueno. “I was so happy when I was selected for Freshman Committee here, and I’ve enjoyed it ever since.”

Now that she has made it to UWF, she is happy with her choice and thrilled to be selected to help represent 12,000 students.

“I’m excited to be here,” said Bueno. “The 12,000-student landmark is just jaw-dropping. You can feel how energized people are about it, and I’m so happy to be a part of it.”

After graduating with a bachelor’s degree in business, Bueno hopes to eventually go on and further her education in health administration or something else in the medical field.

As for being a first-generation student, Bueno said she feels the responsibility of making her parents proud.

“I think my parents would say that I am representing my family well,” said Bueno. “They’re really proud of me and pushing me to finish. I’ve been given a great opportunity to further my education, and I’m not going to spoil it. Most people can go to college, but most don’t. I’ve determined to never give up and to make the best of every blessing I’ve been given.”

UWF established the First Generation Scholarship in 2006 to help ease the financial burdens of these students.