Caleb Waller is majoring in business at the University of West Florida (UWF), taking summer classes and is interested in videography. He and his friend Sean Cullen, are currently working on a Federal Government contract to produce informational videos for the National Oceanic and Atmospheric Association (NOAA). The contract will total more than $54,000. 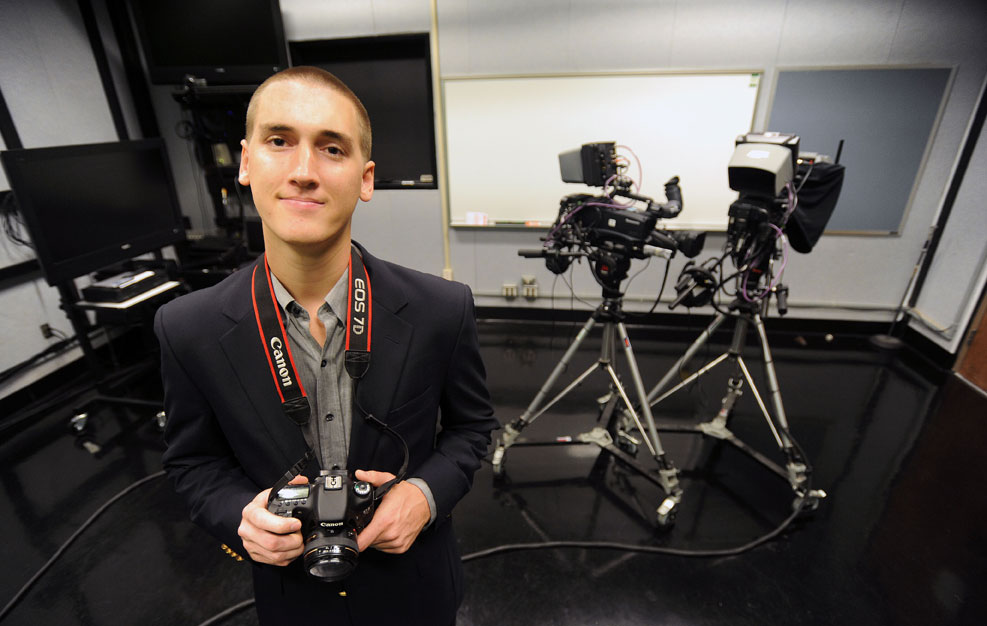 The videos show experts in various fields discussing current research based on environmental data and making predictions for the future based on the data. Their current contract is a year long and Waller predicts it will be much larger than anything they have done before.

Waller and Cullen, both founding partners of Intensity Media, are young audio and video engineers. Long before the NOAA contract, they got their start in a garage band, recording and producing CDs. Right out of high school, Waller went to trade school for audio engineering in Washington, D.C.

“At first, I thought I would get into the music side of things,” said Waller. “However, I got a job offer from a friend’s dad who owns his own audio production company in Baltimore. I didn’t know much about the video side of things. I worked there for about three years and went to community college. That’s when I developed a passion for video. I saw that the demand for online video had constant growth and a future I’d like to be a part of.”

Soon after, Cullen and Waller started talking and decided to pursue a career in online video production, and Cullen accepted a job at NOAA. After working there for a year, Cullen decided he wanted to join his friend.

Waller was attending UWF at the time they decided to go into the video production field full-time. Cullen moved to Pensacola in the fall of 2011.

“We got our first jobs through word-of-mouth marketing,” said Waller. “By the end of 2011, NOAA heard about our video company and contacted Sean, and we began working on a small contract for them.”

From there, the two men travelled the country shooting footage for the video and began to see their business grow.

After finishing school, Waller plans to put his full effort into building the company’s portfolio and possibly work in the public sector for the government.

Waller attributes a lot of the company’s success to the education he received at UWF.

“I’ve learned how to plan for my life and career,” said Waller. “I’ve learned to look at particular industries, see possible success and look for new ways to capitalize on future growth.”

As for the future, Waller admits he doesn’t know where the company could head or how successful it could be, but he is prepared to take the knowledge he has gained and the experience he has and apply it to his future endeavors.

“I enjoy helping others communicate,” said Waller. “We learn about a client’s company and brand, discover what they want to communicate and then build a strategy around that. I don’t know where the future is going to take this company, but I’m excited for the direction it’s been heading.”