On Dec. 23, 2003, in the dark of night, Jason Crawford, MBA, ’10, an infantryman in the U.S. Army, was called to execute a mission clearing houses in Baghdad, Iraq. As he turned a corner, an enemy hiding on the opposite side of the wall and wielding a colt-38 pistol shot him directly in the face from less than a foot away. 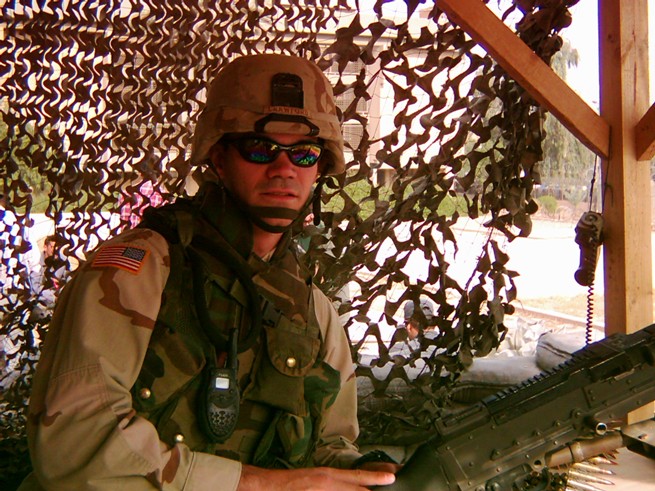 “The bullet knocked out my front tooth, but I didn’t realize I had been shot at that point,” Crawford said.

One of Crawford’s team members pulled him to safety. Despite losing a lot of blood and collapsing amongst the firefight, he was evacuated to the green zone, or safe area. X-rays revealed the bullet had lodged in his upper jaw, and an army doctor was able to surgically remove it.

Despite a gunshot to the face at close range, Crawford returned to his daily life after oral surgery and recovery time.

“It’s nothing short of a miracle,” he said. “God had a bigger plan for me, and I’ve been trying to live up to that plan ever since.”

Crawford joined the U.S. Army at age 18 and began honing his leadership skills. He was stationed at Fort Hood Army post in Texas and spent time overseas in South Korea and Bosnia. After completing three years of active duty service, Crawford became a member of the Army National Guard.

“I’m most proud of helping the Iraqi people see the possibilities of democracy and freedom and what the future of their country could look like,” he said. “I’ll never forget that.”

He enrolled at UWF in 1999 and actively participated in student life, including serving as a resident advisor, joining the fraternity Sigma Alpha Epsilon and serving as president of the Student Government Association. Crawford received a bachelor’s in business management from UWF in 2004, as well as an MBA from UWF in 2010.

“UWF understands the importance of our military and caters very well to military students,” said Crawford. “I think Dr. Bense and the leadership at the University really appreciate the sacrifices that our veterans have made.”

In his current role, Crawford is a clinic operations manager for Ochsner Health System in Covington, La.  He oversees the daily operations of six specialty physician practices, including financial management, strategic planning and regulatory compliance.

Crawford and other Wounded Warriors will throw a commemorative first pitch at the UWF Military Appreciation Baseball game Sunday, April 22 at 1 p.m. Instead of purchasing tickets at the game, donations will be accepted from fans with all proceeds going towards the Wounded Warrior Project. All military members will receive a free baseball hat or shirt upon admission. Join the festivities at 12:30 p.m. for a cookout in the parking lot of Jim Spooner Field on the UWF main campus.