UWF trustee chairman recognized with the Presidential Medal of Honor

University of West Florida Board of Trustees Chairman Mort O’Sullivan was presented the Presidential Medal of Honor during the fall commencement ceremony on Dec. 14, 2019, honoring his more than 40 years of distinguished service to the University. 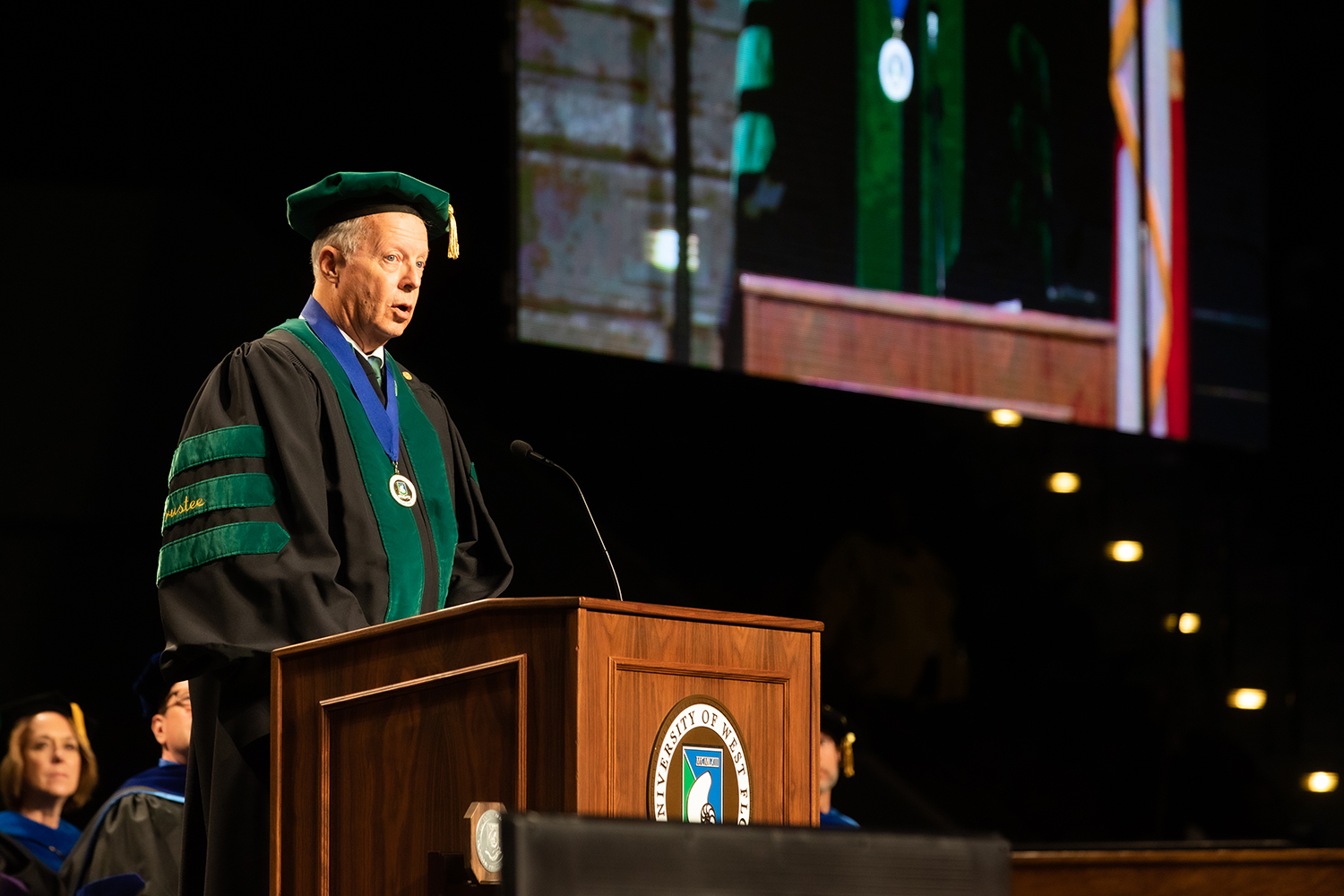 The award is presented to individuals who have distinguished themselves by their actions and contributed in some manner to the wellbeing of the University and the geographical region, primarily through public service and philanthropy. Recipients embody UWF’s values and leave a distinct and positive impact on the University and community.

“Presenting the Presidential Medal of Honor is a small way of showing our appreciation for Mort’s dedication and leadership over the course of four decades,” said UWF President Martha D. Saunders. “His legacy will remain a part of who we are as a University. We thank him for years of unwavering support.”

O’Sullivan earned his Bachelor of Arts degree in Accounting from UWF in 1973 and has been active with the University since 1975. He has served on the UWF Foundation Board of Directors, College of Business Advisory Council and presidential search committees. He is also a UWF Foundation Fellow and recipient of the University of West Florida Distinguished Alumnus Award.

O’Sullivan joined the UWF Board of Trustees in 2010; he served as vice chairman beginning in 2013 and was named chairman in 2017. This January, his term as chairman will come to an end.

“The University played a critical role in my life at a time when I needed guidance and direction, and I’ve never forgotten that,” O’Sullivan said. “I will owe the University for the rest of my life, and I truly think it’s our duty to make this a better place for those who come behind us.”

O’Sullivan became licensed as a Certified Public Accountant in the state of Florida in 1975. He began his accounting career with the international accounting firm Deloitte Touche in Atlanta. In December 2017, O’Sullivan retired as the managing member of Warren Averett, LLC, where he focused on consulting and management advisory services to clients, while offering his expertise in litigation support, business valuations, mergers and acquisitions. He also is a registered investment advisor.

UWF honorary award recipients are recommended by the Honorary Awards and Recognition Committee and chosen by the president, based on nominations from UWF stakeholders, including faculty, staff, alumni, students and trustees or advisory group members.