Derek Brauneis had little automotive experience before he helped design and build the first off-road race car that will represent the University of West Florida at an international competition held in Pittsburg. 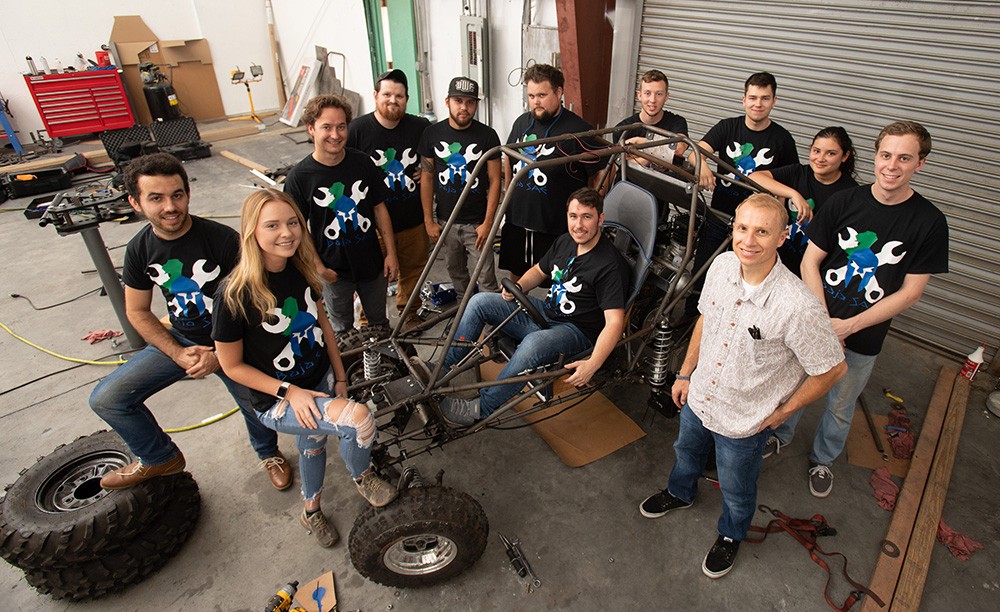 Derek Brauneis had little automotive experience before he helped design and build the first off-road race car that will represent the University of West Florida at an international competition held in Pittsburg, Kansas, May 17-20.

“As far as working on cars, I haven’t done anything other than change my oil or inflate my tires,” said Brauneis, a recent UWF mechanical engineering graduate.

The four-wheeled vehicle is UWF’s first-ever entry in the annual Baja Society of Automotive Engineers competition, which culminates with a four-hour endurance race featuring vehicles from almost 100 other colleges and universities. The competition vehicle entered by UWF was designed and built by a team of students in the growing mechanical engineering program, which is only in its second year in existence. The team is mentored by Dr. Joseph Piacenza, assistant professor of mechanical engineering.

“The SAE competition is a great opportunity for the students to apply what they’ve done in class,take all those equations and actually put them to use so they get that hands-on experience to design and manufacture a vehicle,” Piacenza said.

Because the mechanical engineering program at UWF is still relatively new, the students had to do a lot of fundraising to come up with the tools and materials needed to build the race car. The program and the Hal Marcus College of Science and Engineering provided seed money for the project. The vehicle has been built at a leased site off campus.

“We started from scratch. We didn’t have tools of any sort, it was an empty building,” Piacenza said. “We had a budget that we were able to work within and we came up with all the required infrastructure.”

Since this is the first year the UWF team will participate in the event, expectations are modest.  Piacenza said one of the biggest goals is to pass a rigorous technical inspection.

In addition to the endurance race, the competition also includes a series of static events such as an acceleration test and maneuverability and suspension courses. Each team is also required to give a design presentation.

Brauneis was part of senior capstone team that designed the front and rear suspensions for the single-seat vehicle. He said the project has given him a lot of practical experience that can be applied as he pursues a professional career, possibly in the aerospace industry.

“One of the best things I learned from this is being able to design a product and then knowing whether or not it’s able to be manufactured,” Brauneis said.

Piacenza said automotive and aerospace companies tend to look for college graduates who have experience participating in the Baja SAE programs. He said competing in the event annually will also help UWF recruit high school students and community college students who want to become engineers.