Two University of West Florida students were recently invited to join the American Chemical Society Scholars Program, a prestigious accomplishment awarded to approximately 82 students nationwide per year. Since 2012, five UWF students have been named ACS Scholars and have received a total of $25,000 in annual scholarships. 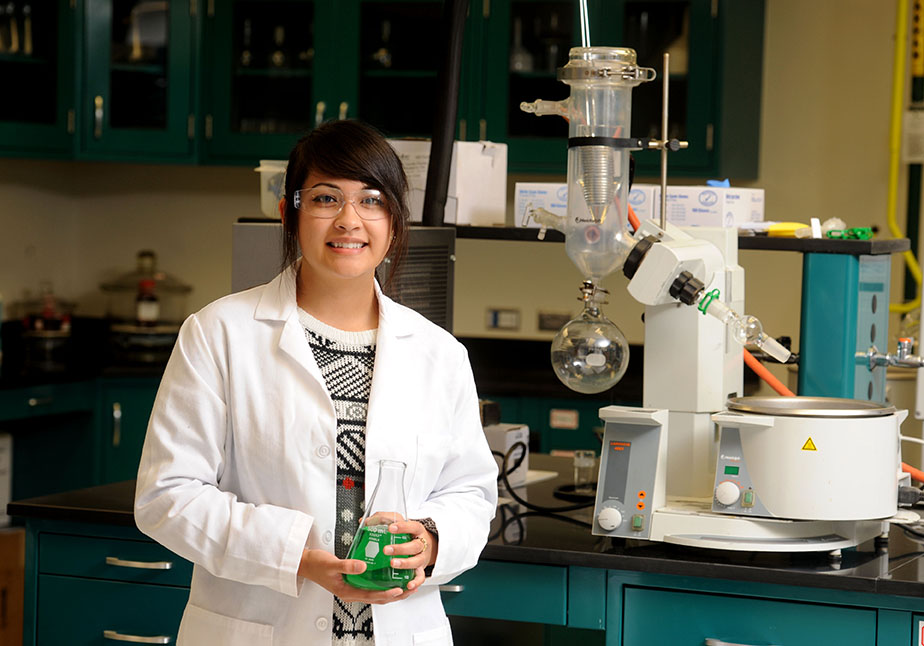 Freshman Amanda Tonnaer and sophomore Chiena Witt were awarded a total of $6,000 in renewable scholarships through the ACS Scholars Program this fall. They will also have the opportunity to work with a mentor through the program and network with fellow scholars and scientists at future ACS National Meetings.

“Being selected as an ACS Scholar has provided me the opportunity to pursue an education in my preferred field of science, as well as the potential for future internships,” Tonnaer said. “It has given me the encouragement needed to succeed in college. I’m excited about this golden opportunity to grow as a person and obtain the knowledge necessary to do well in my future career as an analytical chemist.”

Both students are also part of the UWF Chemistry Scholars Program, which was established in September 2011 to recruit and retain high-achieving chemistry students and to increase the number of chemistry students pursuing PhD or MD-PhD degrees, with an emphasis on under-represented students.

Witt is currently conducting research under the direction of Dr. Pamela Vaughan, associate professor in the UWF Department of Chemistry. She credits both the ACS Scholars Program and her academic experience at UWF with impacting her future career goals.

“Dr. Karen Molek has been a great help to me at UWF, and without her encouragement I never would have applied for the American Chemical Society scholarship or changed my career path,” Witt said. “This experience has introduced me to the world of research, and it has inspired me to pursue an MD-PhD in Oncology in the near future. The ACS Scholars Program helps students become successful in their related fields and gives them the tools needed to thrive in a scientific environment, as well as become well-rounded and successful individuals.”

The ACS Scholars Program was established in 1994 to attract African American, Hispanic and American Indian students considered underrepresented in the chemical sciences by the National Science Foundation to pursue careers in the field. The program also aims to help build awareness of the value and rewards associated with careers in chemistry and assist students in acquiring skills and credentials needed for success. For additional information about the ACS Scholars Program, visit www.acs.org.