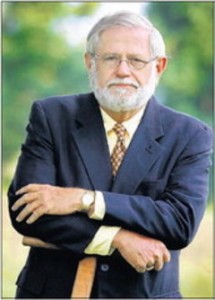 Within the span of 10 years, HealthSouth CFO Aaron Beam went from helping to revolutionize the health care industry and being a millionaire, to participating in one of the largest and most publicized cases of corporate fraud ever, lending him time in prison.

Beam spoke at the University of West Florida Nov. 8 on the subject of “HealthSouth: The Wagon to Disaster,” which chronicled his journey of corporate success, fraud and lessons learned.

The story begins when he met Richard Scrushy, HealthSouth’s CEO. Scrushy had a dream to revolutionize the health care industry with outpatient hospitals, rehabilitation hospitals and outpatient rehabilitation facilities. Scrushy asked Beam to serve as CFO and Beam obliged, believing in the idea.

In September of 1986, HealthSouth went public on Wall Street with two million shares.

“Within weeks it was traded at over 10 dollars a share, which is unheard of,” said Beam. “I was a millionaire. I bought beach houses in Florida and a new car every year.”

Beam explained how the wealth and success changed his business partner Scrushy. He started a band and began carrying a gun in his briefcase. Scrushy also continued to surround himself with bodyguards and became paranoid as the years passed.

By 1995, HealthSouth was the largest company in Alabama and was operating in all 50 states, with more than 50,000 employees.

“We were really a good company,” said Beam. “We were not at all like Enron.”

“It was the summer of 1996 when Richard called us into his office,” said Beam. “I should’ve confronted him. I should’ve said no, but Richard carried a gun in his briefcase,” joked Beam.

Assured that it would only be for one quarter, Beam and Owens obliged, but Scrushy ordered them to do the same thing next quarter.

Feeling guilty and like he had “blood on his hands,” Beam retired from the company, sold his stock and property and set out to make an honest living for himself.

“I wanted to make a new life for myself and get as far away from the fraud as I could,” said Beam.

In the spring of 2003, news of the scandal broke and Beam hired an attorney. The trial began in 2005 and ended with Scrushy being acquitted. The jury believed him to be a good man, misled by his accountants.

“I was sentenced to three months in prison,” said Beam. “It’s a lot better than I was expecting. I could’ve been in for more than 20 years.”

Today, Beam works mowing lawns and speaking to others about the importance of ethical business and accounting practices.

“When I was 14, I made my first dollar mowing lawns,” said Beam. “Now here I am, proudly doing it again.”

“Realize that one day, you could be asked to do something you shouldn’t do,” said Beam. “Don’t be overly influenced by others to the point that you do wrong. You have to have some moral character about how you conduct yourself in the business world.”