The University of West Florida will honor Dr. Morris Leon Marx and Dr. Nick Power on Friday, Nov. 4, 2016, as part of the UWF Rite of Passage lecture series. The event will be held in the Argonaut Athletic Club on the UWF Pensacola Campus at 2 p.m. It is free and open to the public, with a reception immediately following. 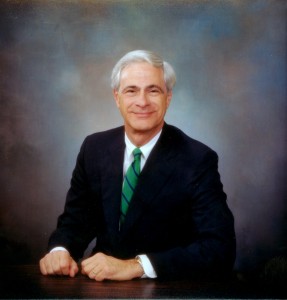 Marx, third president of the University of West Florida and professor of mathematics and statistics, will present a special lecture, “Universities: Passages But No Rites,” in honor of his recent retirement. Inaugurated as president of UWF in September 1988, Marx oversaw significant expansion of the University’s campus, presence and resources. During his tenure, Congress approved the 136-acre land swap to create UWF on the Emerald Coast in Fort Walton Beach, which opened in 1992. Additionally, Marx ushered in the beginning of the education specialist program as well as facilities such as the Center for Fine and Performing Arts, College of Education Complex, student services building, psychology building, residence halls and on-campus apartments.

Complementing campus development under Marx’s leadership was the growth of UWF’s support and athletic programs. The University established a women’s soccer team, joined NCAA Division II, and received a $12 million gift in John C. Pace Jr.’s estate. The University continued achieving milestones during Marx’s presidency, conferring its first doctoral degrees and expanding the Pensacola Campus to its current 1,600 acres. From the acquisition of the UWF Historic Trust, formerly known as West Florida Historic Preservation, Inc., to raising the anchor from the first shipwreck found in Pensacola Bay from the 16th-century Luna expedition, UWF continued to make, preserve and discover history under Marx’s leadership.

With 20 years of faculty service at UWF, Power will present “Moral Luck and Mentorship: Forging a Philosophy of Sex in the Dirty South.” For the past decade, he has focused on editing and contributing to “The Philosophy of Sex: Contemporary Readings,” a best-selling textbook. Now in its seventh edition, the book features essays examining the meaning of contemporary sex. He has also published encyclopedia entries, book chapters and reviews on various aspects of the philosophy of sex, mind and science.

Since 1996, Power has been chair of the philosophy department and taught in the areas of ethics, the philosophy of sex and love, and political philosophy. Additionally, he has been active in the community, serving as director of the Florida Chapter of the Institute for the Advancement of Philosophy for Children, and president of the United Faculty Florida-UWF chapter throughout his time at the University. Power received a doctorate from Temple University.

For more information, visit the Rite of Passage website.