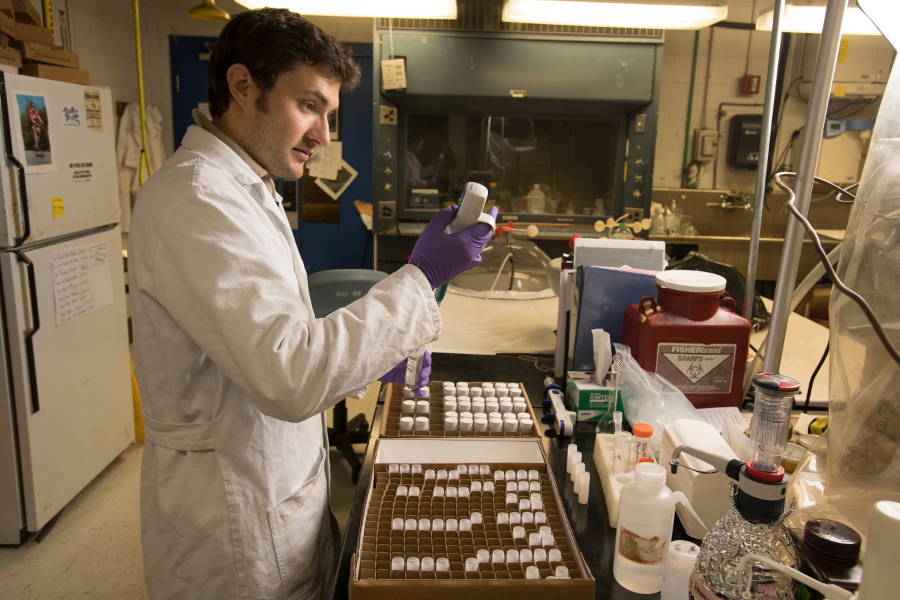 Among the projects funded by BP because of the Deepwater Horizon oil spill is the deployment of artificial reefs along Florida’s Panhandle as part of an effort to restore crucial habitats for fish and other marine animals.

University of West Florida researchers are part of a team conducting a study to see how effective some of those reefs are in creating a productive ecosystem that will attract fish and help revitalize the commercial fisheries affected by the spill.

Dr. Jane Caffrey, a professor in the Center for Environmental Diagnostics and Bioremediation, Dr. Will Patterson, a professor at the University of Florida, and Florian Cesbron, a post-doctoral research associate at UWF, is performing the study. A grant from the Center for Research and Economic Opportunity at UWF funded Cesbron’s work.

“Our focus is a relatively small area off Perdido (Key), and the reason for that is the project design is to do a before/after control and impact study,” Caffrey said. “This design is based on going out there and evaluating the resources before there are any artificial reefs out there, and then putting the artificial reefs out and seeing how things change.”

UWF researchers in November 2015 began surveying conditions around the areas where the reefs would be placed. The Orange Beach-based company Walter Marine built and then deployed the six reefs in September 2016. Within just a few weeks, said fish started congregating around the structures, Caffrey said.

“One of the things that happens whenever you put anything in the water and particularly any kind of hard structure is it starts getting colonized by different organisms,” Caffrey said. “Initially the bacteria are the first ones that colonize it, and then microalgae will start colonizing. And then you get macroalgae and then lots of benthic invertebrates.

“The longer something has been out there, the more things get on the reef,” Caffrey said. “That’s one of the things that we’re looking at in the project, is exactly what is getting on the reefs and how is that changing the overall ecosystem.”

Cesbron has led the team of undergraduate and graduate students, which made about 25 trips out to the reef sites to collect samples for analysis. Student and professional divers have helped with the research project.

“It’s really nice to work with all these people with the different backgrounds, even some students from UWF can dive for us,” Cesbron said.

Various species of fish have been around the reefs, which are both pyramid and disc-shaped. A photo taken during one of the UWF dives shows a goliath grouper inside one the pyramid structures.

“Whatever it is that makes fish decide that they like one area versus another, these species like the complexity of those type of environments. So when you put a structure out there, fish are attracted pretty quickly,” Caffrey said. “What is less well studied is, are you just sort of gathering fish from other places, or are you actually leading to producing more fish, higher fish survival and reproduction? And that’s what this study is trying to show.”

The artificial reefs are designed in part to make up for lost fishing opportunities after the 2010 spill.

“The state of Florida is saying because people lost opportunities to fish, we’re going to put artificial reefs out to mitigate the loss of the time for fishing,” Caffrey said. “What this study should be able to show is would artificial reefs also be useful in mitigating for any damage to the fisheries as a result of the oil spill.”

Caffrey said UWF researchers hope to have a preliminary paper on their findings completed in the spring. However, the final results of the study will likely be published by the end of the year, she said.