The University of West Florida celebrated a $39,593 donation to the UWF Department of Music in support of the Larry Butler Memorial Music Award on Tuesday, April 2, at the Museum Plaza in Historic Pensacola. The new funds are a result of a fundraising concert featuring Dean Dillon in downtown Pensacola and the Frank Brown International Songwriters Festival, which were both held in November. 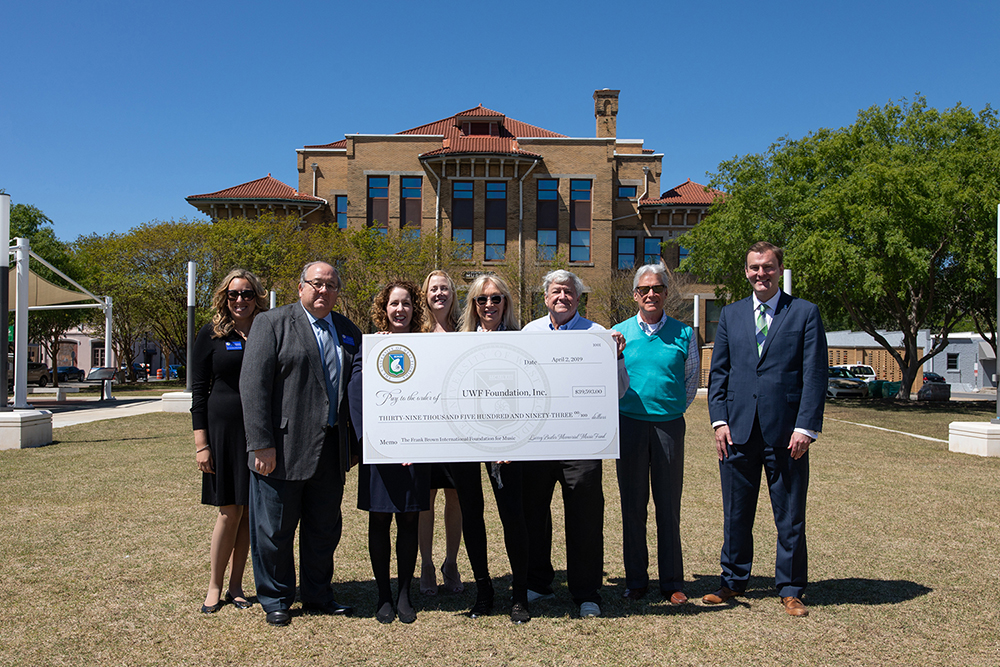 The donation will provide opportunities for students to work with world-class artists and travel to competitions, conventions and elite music festivals. The Larry Butler Memorial Music Award was created in 2015 by Peggy Butler in memory of her husband, a Grammy Award-winning songwriter and producer and Pensacola native.

“This gift will positively impact our students, faculty and community on a daily basis,” said Dr. Sheila Dunn, chair of the Department of Music. “The Larry Butler Music Memorial Award is truly transformational for our music students and for our department.”

More than $132,000 has been raised by the Butler family and friends to support the Department of Music. Nearly $40,000 in scholarships have been awarded from the fund.

“This gift – this legacy – is a testament to the profound influence music can have on a community, and I know that Larry is smiling,” Butler said. “The show was an amazing success, and I want to thank every individual, business and organization who played a role, including the hosts, artists and supporters. Larry’s family and friends are especially grateful for this fund established in his name for UWF students; it is a hometown honor.”

Larry Butler worked with renowned recording artists Johnny Cash and Kenny Rogers, among others, during his career in Nashville, and continued to show appreciation for his hometown through his generosity, including holding a benefit concert to raise money for the rebuilding effort following Hurricane Ivan.

The Frank Brown International Songwriters Festival hosts Grammy Award-winning songwriters and rising stars, who perform original songs in multiple locations in the Florida and Alabama Gulf Coast. Venues attract more than 200 songwriters who come from around the world.