A team of seven electrical and computer engineering students from the University of West Florida on the Emerald Coast placed fourth overall and first among the Florida State University System at the Institute of Electrical & Electronics Engineers SoutheastCon Hardware Competition, held April 9-12, 2015, in Fort Lauderdale, Fla. 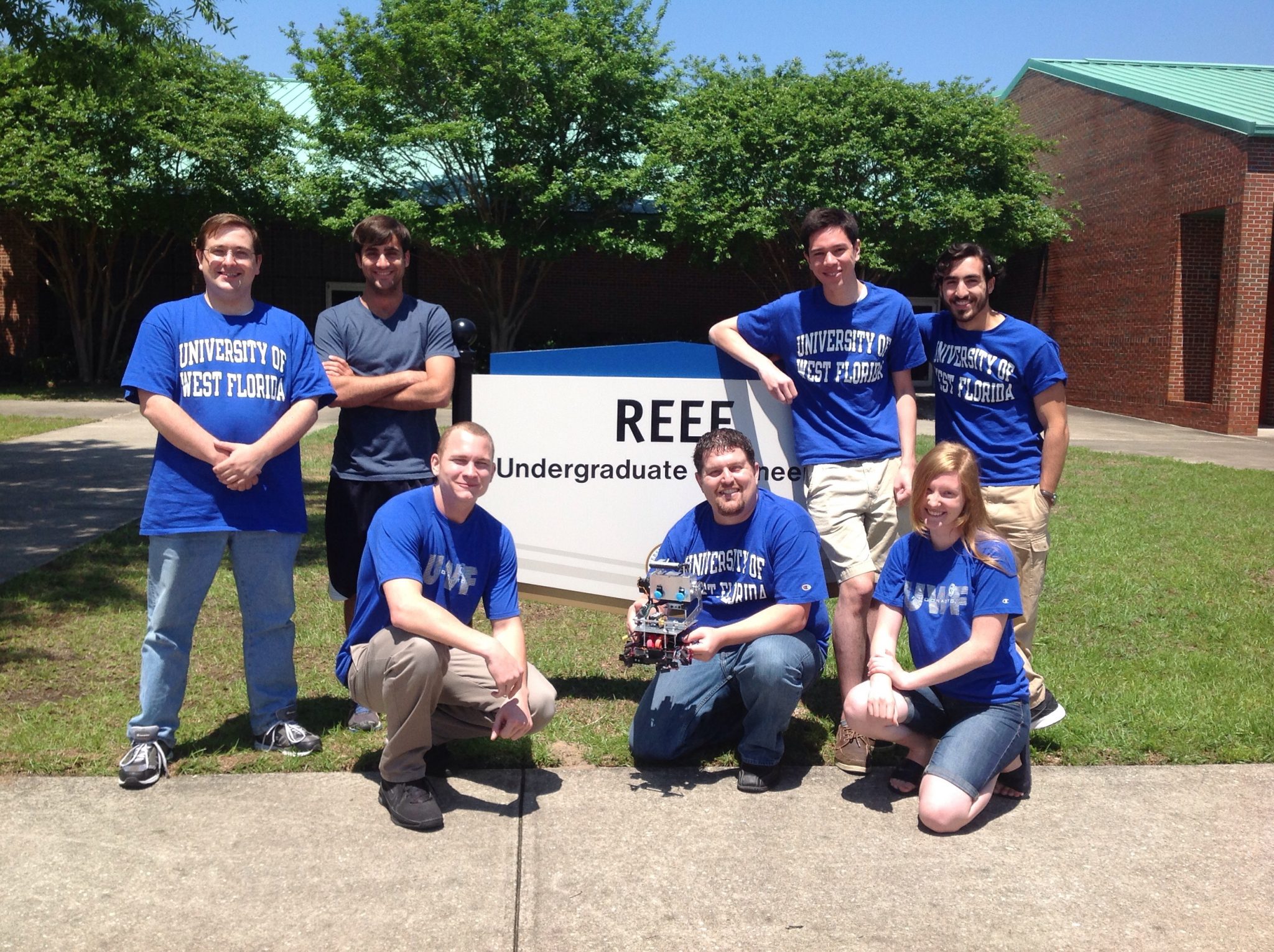 UWF students have participated in the competition for more than 15 years, according to ECE department chair Dr. Mohamed Khabou. “ECE faculty mentor the teams, and the department provides financial support for project construction and team travel,” he said. “We are very grateful to our community supporters who provide financial support of these and other projects.”

This project begins as soon as rules are released for the following year’s competition, when students organize into a group and seek the mentorship of an ECE professor. The team works tirelessly to design a robot, presenting multiple iterations to faculty, who provide feedback. Students build and test the final version of the robot before traveling to the competition, where their skills are evaluated against those of their peers.

Under the direction of ECE lecturer Dr. Andreas Fuchs, the 2015 team included Josue De Jesus, Lee Fulton, Jacob Gourlie, Kenneth King, Lindsay Leyo, Ryan Sanders and Franklin Wyeth. Competing against 52 teams including Duke, Embry-Riddle and the Citadel, UWF ranked No. 4 overall and No. 1 among all schools in the Florida State University System.

A complete ranking of the Top 15 schools follows:

“These projects are prime examples of learning-by-doing and allow students to improve their problem solving and engineering design skills,” Khabou explained. “Going to the competition allows students to gauge their work against the work of other students from top-notch engineering programs in the Southeast region of the U.S. and gives them confidence in the solid engineering education they are getting at UWF.”

ECE student Josue De Jesus is proud of his team’s accomplishment. “In a really honest and personal way, it’s a disappointment because we could have easily done better, but from a broad and realistic perspective, fourth out of 52 is excellent,” he said. “In the end, we showed up, made University of West Florida a ‘buzz word,’ represented well and took a solid place. Beating UF, FSU and all other Florida schools isn’t too shabby, either.”

“Luckily, we have great instructors here in the engineering department that taught us the theories and skills needed,” said teammate Kenneth King. “As a team, we were able to apply these theories to the systems on the robot, and when we had any problems, Dr. Andreas Fuchs was available as our mentor to help us merge theory and practical skill together.”

Khabou noted the success in the IEEE competition is just another measure of the quality of UWF graduates. Other measures, including positive feedback from local employers and high performance of graduates on national professional examinations indicate the ECE department is producing competitive engineers.