Ten University of West Florida students recently earned the 2012 Florida Public Relations Association Award of Distinction for their campaign for the Pensacola Museum of Art. 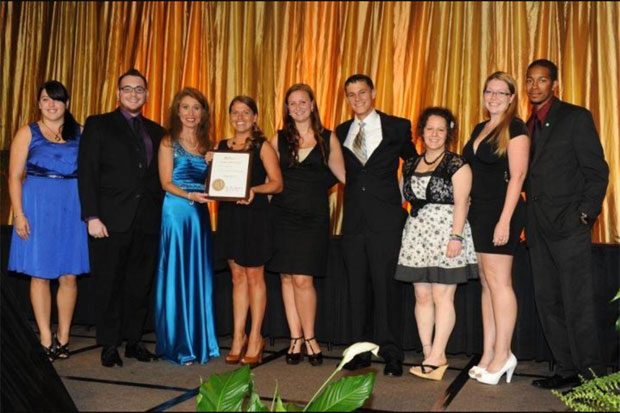 Eight of the students accepted the award on Aug. 7 at the 74th annual Florida Public Relations Association (FPRA) conference in St. Augustine. The competition is open to all students enrolled in colleges and universities in the state of Florida.

The students were part of the Public Relations Campaigns class (Wellspring Public Relations), which functions like an agency. The student-led agency consists of 10 exemplary senior students. Eileen Perrigo, APR, teaches the capstone campaigns course. Established in 2003, the course provides an opportunity for students to get hands-on experience creating a comprehensive PR plan for a local nonprofit organization.

Carson Howton, a public relations specialist in the class, was one of the students who accepted the award at the conference.

“It was such an honor,” Howton said. “To be recognized by the FPRA as a student group is a huge accomplishment for us and for the university. I especially want to thank Mrs. Perrigo – we couldn’t have done it without her leadership and expertise.”

Adam Faircloth, Wellspring PR’s creative director, was also honored by the recognition he and his classmates received for their hard work.

“I probably spent a total of 150 hours on the campaign over the course of one semester,” Faircloth said. “But I think our hearts, souls and love for the organization showed through in the final product, and that’s why we were awarded.”

Since its inception, Wellspring PR has helped 10 nonprofit organizations in the Pensacola area. It has received five FPRA Golden Image Awards, representing first place in the competition, and three Awards of Distinction, representing second place.