Fear of contracting AIDS consumed Americans in the 1980s as the epidemic spread across the United States and caused thousands of deaths. Some of that fear originated from ignorance as misconceptions arose that an infected person could put others in danger of contracting the disease through a simple handshake or cough or sneeze in their direction. 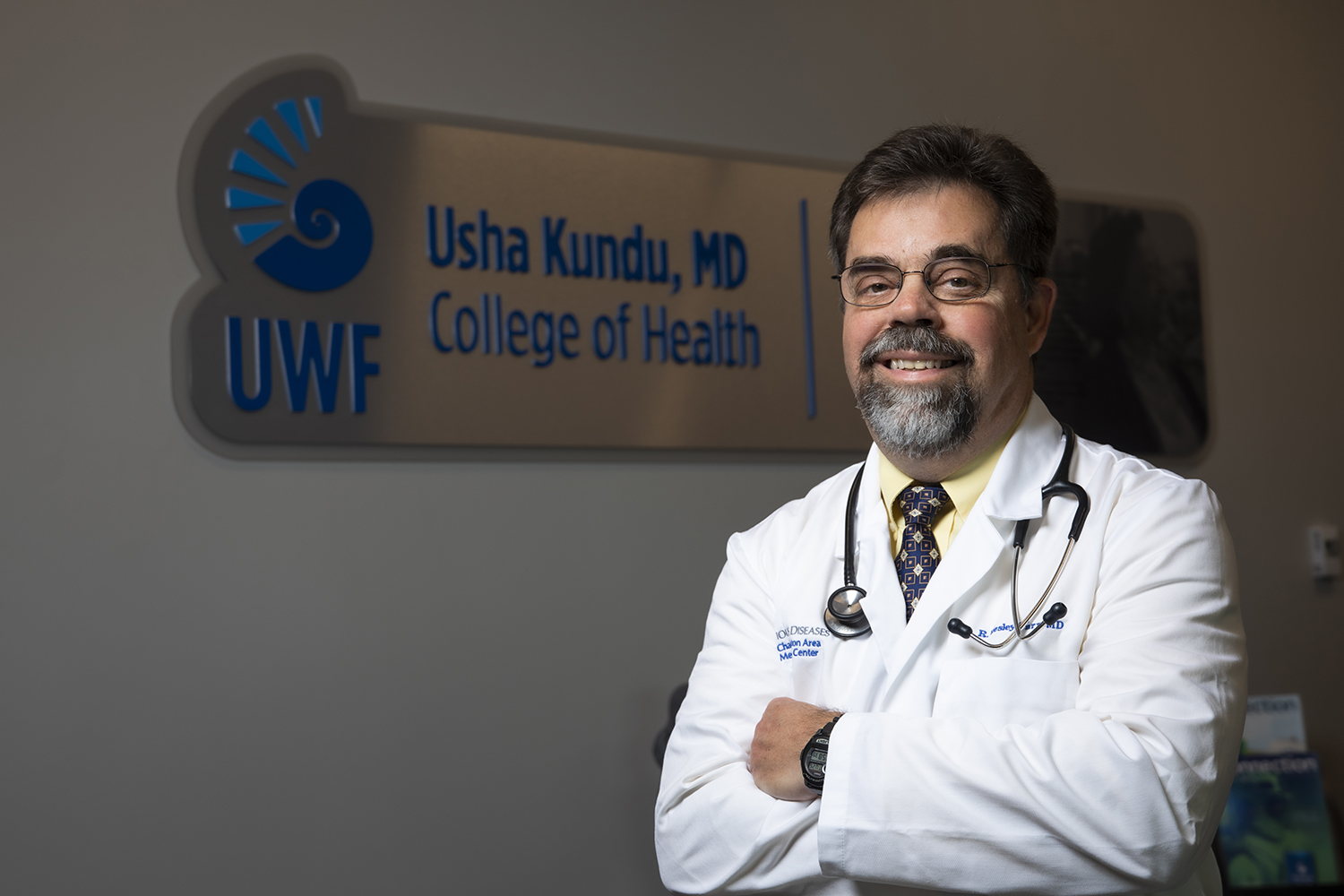 Fear of contracting AIDS consumed Americans in the 1980s as the epidemic spread across the United States and caused thousands of deaths. Some of that fear originated from ignorance as misconceptions arose that an infected person could put others in danger of contracting the disease through a simple handshake or cough or sneeze in their direction.

Dr. Wes Farr knew better from his years of practice and felt a calling to treat those infected with the life-threatening virus. Previously specializing in tropical diseases during his first stint with the U.S. Navy, he expanded his medical specialty to infectious diseases—a disorder caused by a microorganism such as a virus. Infectious diseases range from the common cold to HIV/AIDS.

The AIDS epidemic slowed down by the mid-‘90s, but the disease lives on. Nearly 35 years after first focusing on infectious diseases during a fellowship at the University of Colorado, Farr splits his time between treating patients for the disorder and teaching the next generation of physicians how to specialize in it. The 66-year-old Farr teaches environmental health and infectious diseases in his first year as a lecturer in the Usha Kundu, MD College of Health at the University of West Florida.

“I like the interaction with students because they have inquisitive minds,” he said. “Hopefully I get them excited about the same things that excite me. A lot of them are interested in going into medicine or some other health-related field.”

Farr is a physician with specialties in infectious diseases, tropical medicine, internal medicine and aerospace medicine. He teaches online courses for UWF which provides him the flexibility to travel each month to Charleston, West Virginia, where he treats patients with infectious diseases at the Charleston Area Medical Center. He said the number of Americans infected with AIDS and other sexually transmitted diseases steadily declined in the 1990s as awareness led to safer sex practices. The number of STD cases started rising in recent years though due to lapses in safe sex practices and the opioid epidemic.

“We have lots of patients in West Virginia who are injecting drug users and catching HIV that way,” Farr said. “The same thing is happening in Kentucky, Indiana and Ohio. It’s a relatively new phenomenon. There’s always been HIV in injecting drug users. It’s just worse now because of the opioid crisis.”

The opioid crisis is felt in Escambia County, too. In 2018, the number of STD cases in the county dipped for the first time in five years yet Escambia still ranked sixth worst among the 67 Florida counties in STD rates according to the Florida Department of Health. Before accepting his lecturer position at UWF, Farr spent 18 months at the AIDS Healthcare Foundation in Pensacola, where some of his patients contracted infectious diseases from shared needle use.

Farr has treated patients for infectious and tropical diseases in Asia, Africa, Europe, South America and North America. He retired from the U.S. Navy in 2015 after serving as senior medical officer on the USS Harry S Truman, director of the U.S. Military Tropical Medicine Course, executive officer of the Navy and Marine Corps Public Health Center, and sharing his expertise as a medical advisor to the ANA Regional Hospital in Mazar-e-Sharif, Afghanistan.

“Dr. Farr is an invaluable addition to our faculty team. His professional stature and world-class experiences in a public health classroom is the kind of impactful instruction our students desire,” said Dr. Justice Mbizo, chair of the UWF Public Health Department. “His diverse public health experiences in environments add a unique perspective in the classroom. He is a true humanitarian with a tremendous heart for service and public health is a natural fit.”

“Prior to that, HIV was a nearly universally fatal disease and now it’s a highly survivable disease,” Farr said. “People are living longer with HIV infection. A lot of people that comply with therapy live a relatively normal life except they have to take a pill every day.”

Asked if he feared contracting AIDS when first treating patients in the 1980s, Farr paused with a puzzled expression on his face as if he never considered the possibility.

“I didn’t have much fear about it at all. You just take the proper precautions,” Farr said. “This country has come a long way because of the education efforts. People for the most part are reasonable and they listen to reason.”