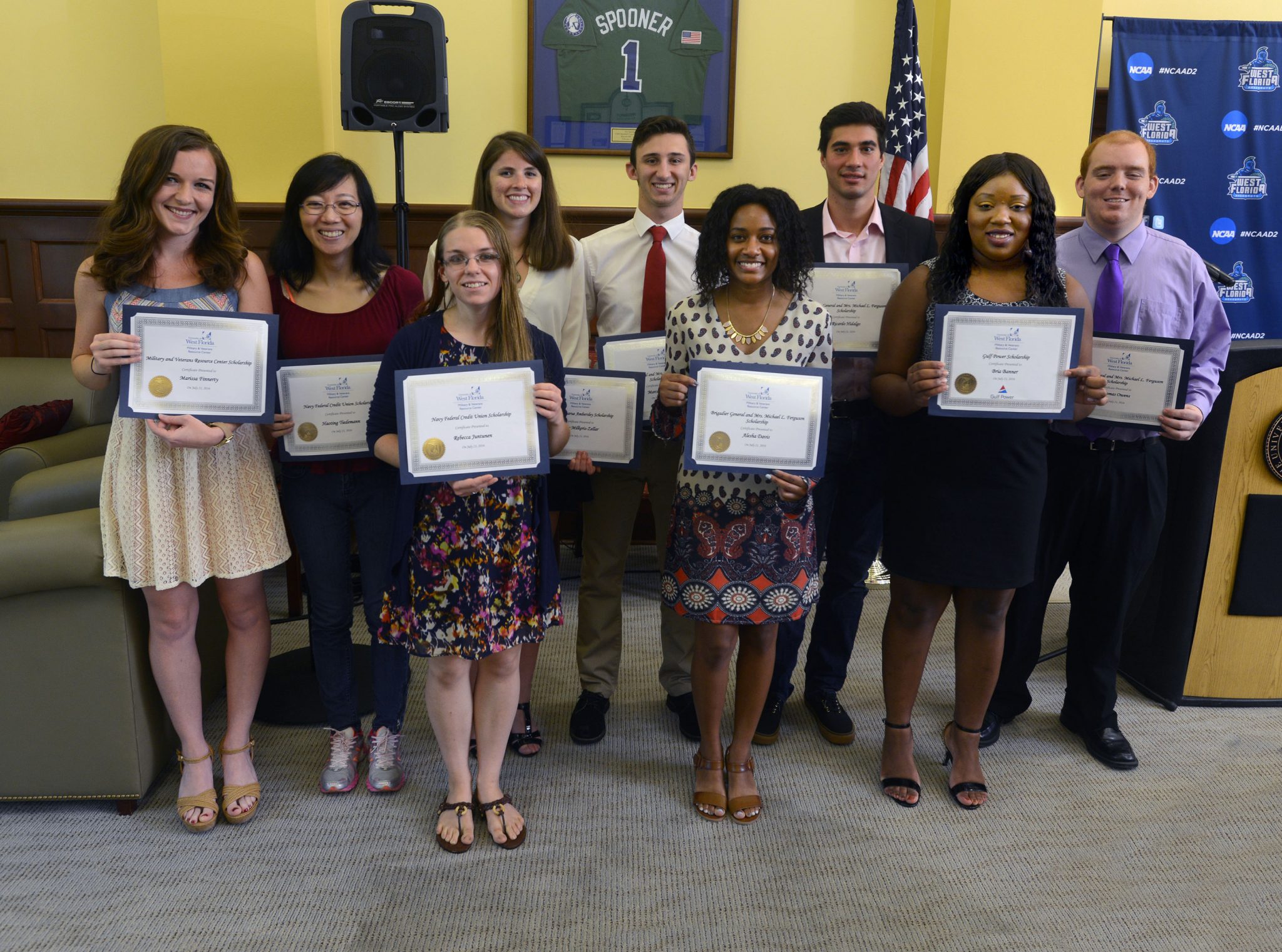 The luncheon recognizes military veterans and dependents or family members of an active or retired military service member who are awarded the Brig. Gen. and Mrs. Michael Ferguson Scholarship, Navy Federal Credit Union Scholarship, Buzz and Larue Ambersley Scholarship or the newly established Gulf Power Company Scholarship. For the first time, the MVRC also sponsored its own scholarship this year.

“Going to school is a big deal,” said MVRC Director Marc Churchwell. “Any sort of springboard or help we can provide, we certainly want to do that. It’s not just our veterans, but their dependents who get to go. This is part of their career path and it’s helping them move forward. 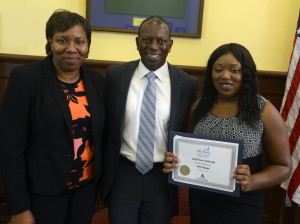 Gulf Power provided more than $30,000 to the MVRC in December 2015 to recognize the Center for its support of wounded military members and their families. Part of this gift was used to establish the Gulf Power Company Scholarship, presented to Bria Banner, a junior communication arts major, as a tribute to her brother, Pfc. Brandon Banner, who was among the nine soldiers killed in the Texas floodwaters in June. Their mother, Sarah Banner, has been a UWF employee with Continuing Education for more than 25 years.

“When I give Bria this scholarship, we are beginning with the end in mind,” said Capt. Keith Hoskins, major accounts and military affairs manager for Gulf Power, as he presented the scholarship on the company’s behalf. “She’s very focused and I know that this scholarship is going to lead to something great.

Brig. Gen. and Mrs. Michael Ferguson were also present to award scholarships to five students in the College of Business. In 2001, the couple created an endowment to provide support for military veterans and their dependents who demonstrate leadership capability and commitment to service. This year’s recipients include:

Tiedemann said the support was unexpected and invaluable. After receiving a degree from Yangtze University in Hubei, China, she became a dental hygienist with dreams of being a dentist. When Tiedemann enrolled in dental school prerequisites at UWF, she realized her previous degree rendered her ineligible for aid. The scholarship provides support for application expenses and tuition costs.

“We couldn’t believe it,” said Tiedemann, whose husband served in the Navy for 20 years. “It was perfect timing. I’m taking the Dental Admission Test and applying for dental school this spring so we had begun saving for interview travel costs and application fees. This will be a tremendous help with expenses and minimizing loans.”

The Buzz and Larue Ambersley Scholarship was established in 2012 with the UWF Foundation Inc. to provide assistance to a dependent child or spouse of a veteran, deceased or active duty, non-commissioned officer who is a resident of Escambia, Santa Rosa, Okaloosa or Walton counties. The scholarship is renewable and applied until the recipient graduates. Tyler Milkeris-Zellar, a sophomore physics major and Air Force veteran dependent, was presented the award at the 2015 luncheon and returned this year to share how it has impacted her experience at UWF.

“The scholarship has given me the opportunity to live on campus, which has allowed a more integrated college lifestyle and community with my peers,” she said. “It has broadened my horizons and allowed me to attend out-of-state conferences and visit other university’s physics graduate programs. Receiving this scholarship has changed my life immensely, and I am so grateful to have people like Joe and Maggie Ambersley in my life.”

After receiving more than 130 applications, the Center created the Military and Veterans Resource Center Scholarship. Marissa Finnerty, a senior studying criminal justice and legal studies and dependent of a Navy veteran, was selected as the first recipient. With only three classes left until graduation, Finnerty was one course shy of full-time status and received a prorated Pell grant amount for the fall term. The MVRC scholarship will help offset the aid she did not receive.

“I’m so grateful to be able to focus on my school and finish my education without stressing about finances,” she said.

The MVRC is committed to serving the educational and training needs of prospective and currently enrolled service members, veterans, their dependents, their survivors and others eligible to receive educational benefits under the various Department of Veteran Affairs programs. For more information about the MVRC, visit uwf.edu/mvrc.