The University of West Florida Military and Veterans Resource Center celebrated its fifth anniversary on Wednesday, Oct. 12, 2016. The celebration included an open house barbecue to honor those who have protected and served and featured a live jazz band, office tours, refreshments and guest speakers, including student testimonials. 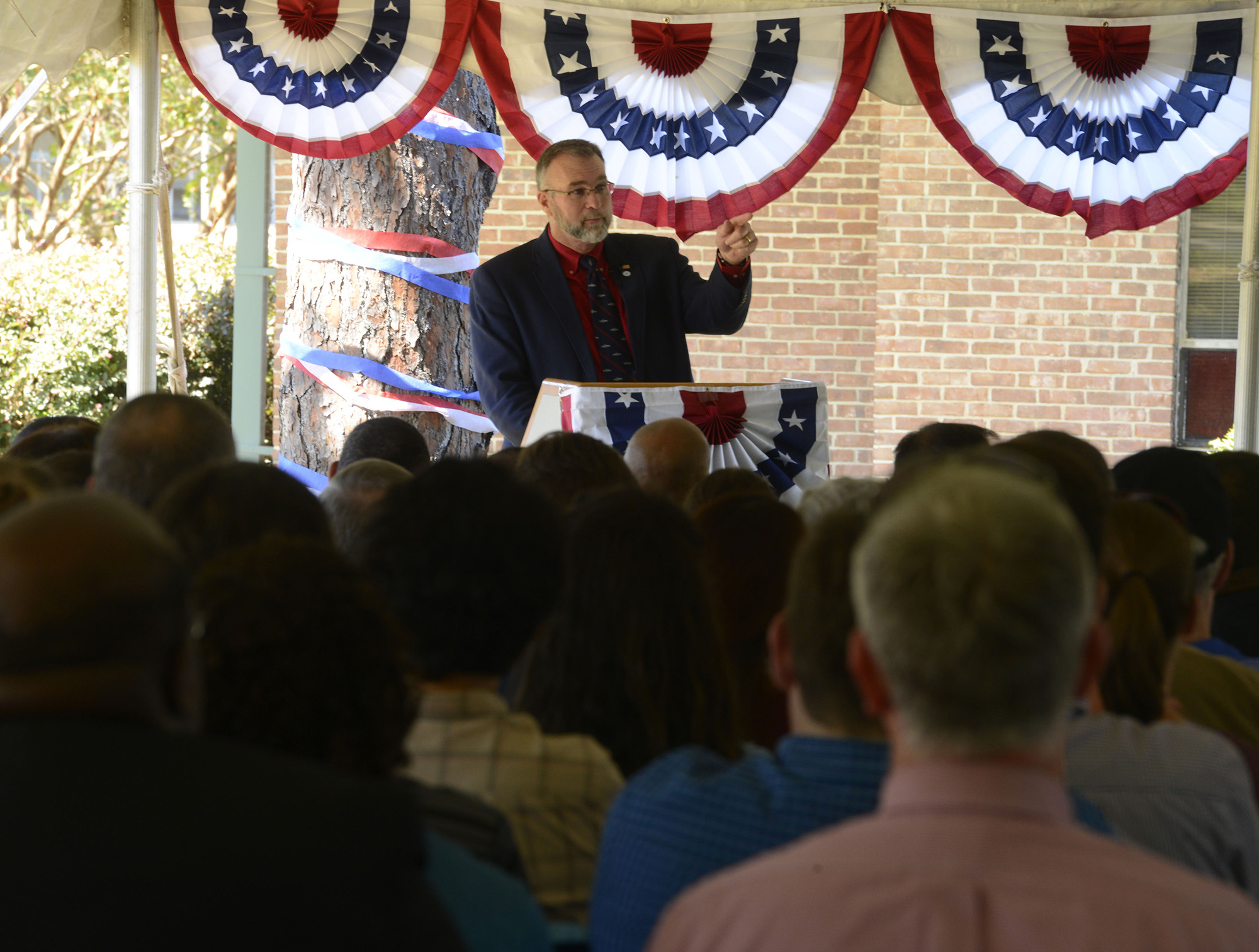 The MVRC was opened in October 2011 to create a one-stop shop, providing guidance in navigating University, state and federal resources and assisting military and veteran students as they make the transition from military to civilian life.

“We opened the MVRC to create a place on campus where veterans feel comfortable coming for help and receive accurate answers to their questions as they work through the process of using their GI Bill educational benefits,” said Marc Churchwell, MVRC director. “Our standard closing statement to new students being introduced to the MVRC has always been, ‘No matter what your question or issue is, if you don’t know where to go for help, come here and ask us. There is a good chance we have already dealt with similar situations in the past, and if not, we are much better equipped to find a resolution than a veteran student alone.’”

Churchwell said the most significant accomplishment in the MVRC’s first five years was eliminating delays in tuition payment for all students using GI Bill Benefits, which included developing and implementing a streamlined process to verify GI Bill certification requests.

“This one thing removed tremendous stress and frustration for students using these benefits, allowing them to focus primarily on their academics,” he said. “This is certainly a factor in the growing academic successes of students using GI Bill education benefits.”

Another notable achievement is the creation of the Mentoring and Counseling Program, dedicated to oversight of the Standards of Progress of all students using GI Bill educational benefits. The program provides intervention in the form of mentoring, counseling and/or tutoring support as needed for students experiencing difficulties in their studies. Churchwell said he credits this program for keeping more students in school and preventing them from dropping out for poor academic performance.

The MVRC recently expanded its Mentoring and Counseling Program to provide support not only for students using Veterans Affairs benefits, but also to veterans, dependents of veterans and active duty military who are no longer eligible. In October 2015, the MVRC opened an office at UWF Emerald Coast to promote stronger community relations and better serve all military and veteran students across Northwest Florida.

The MVRC also awards scholarships annually to military students and their dependents and, through a recent donation from Gulf Power, provides resources such as book stipends and emergency assistance. In January 2016, UWF was selected as one of five higher education institutions to administer and deliver the Veterans Florida Entrepreneurship Program, a new entrepreneurial training initiative for veterans in Florida seeking to start their own businesses.

Churchwell said the secret to the MVRC’s success is the level of support, ranging from VA work-study students to University leaders such as President Judy Bense, Provost and Executive Vice President Martha Saunders and Dr. Pam Northrup, senior associate provost and CEO of the UWF Innovation Institute.

“The support provided by the MVRC staff to our military affiliated students is a direct product of the great support and relationships shared with all of the departments on campus,” he said. “I don’t believe there is a single department or office we haven’t worked with or relied on in some capacity.”

The idea of veterans helping veterans is key to the hard work and dedication of the staff, Churchwell said. Since opening, the MVRC has provided jobs for more than 100 VA work-study students, not only for their benefit as a source of income, but also as an opportunity to gain professional skills to prepare them for their next career. He said many work-study students have graduated and gone on to work at local businesses and credited the MVRC’s VA work-study program with bringing in more than $500,000 of federal funding to Pensacola over the last five years.

The MVRC’s efforts to support veterans hasn’t been limited to the UWF student body. For the last two years, the MVRC has hosted quarterly networking meetings that include more than 50 different veteran support organizations from the Northwest Florida community, in an effort to eliminate the silos of communication among the organizations and empowering them to help each other help more veterans.

To learn more about the MVRC and its services, visit uwf.edu/mvrc.