Today, University of West Florida President Judy Bense hosted the annual State of the University Address, where she reviewed the university’s recent accomplishments and outlined priorities and initiatives for the new year. 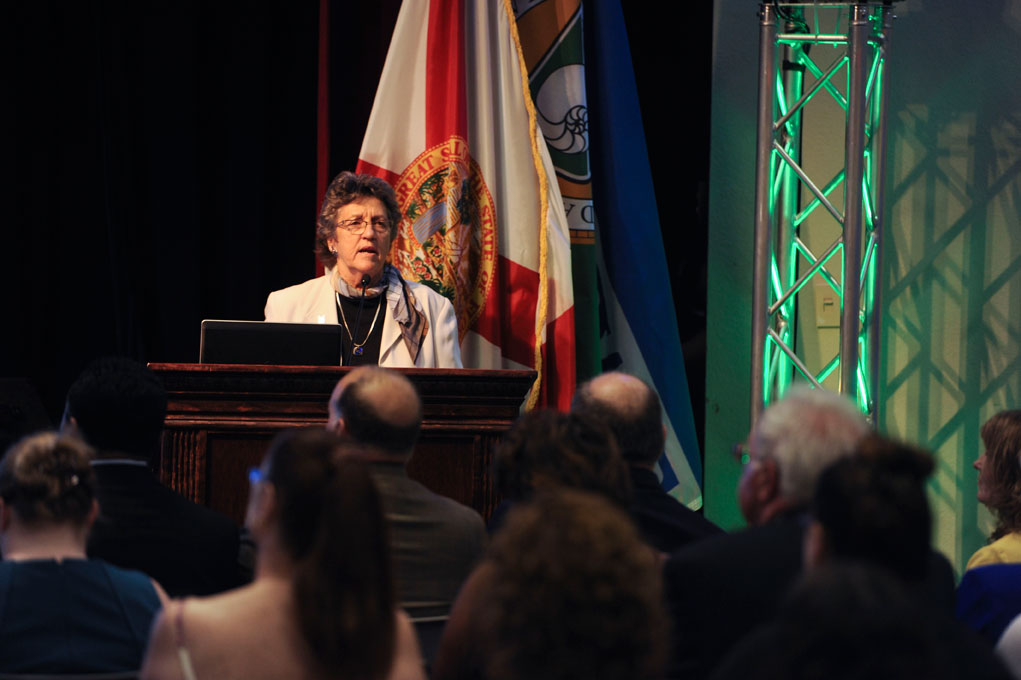 Bense began the address by highlighting the University’s key accomplishments during the 2012-2013 academic year. She thanked key members of the Florida Legislature for their support of higher education. To read more about this year’s legislative budget and its impact on UWF, click here.

“I want to say a huge thank you to those who made these investments in us,” she said. “They believe in what we are doing at UWF.”

Bense highlighted distinguished student accomplishments of the past year, such as the two teams of UWF students who placed first and second in the Myron Zucker Undergraduate Design Contest, a prestigious international engineering competition. She also highlighted Ruth Ashley, a senior mathematics major who was accepted into Harvard University’s Research Experience for Undergraduates internship program for the Summer 2013 semester.

Bense recognized a number of notable faculty accomplishments, including one faculty member who received tenure and a promotion, and six additional faculty members who earned promotions. UWF faculty conducted more than $23 million in research last year, and Dr. Muhammad Rashid, professor in the Department of Electrical and Computer Engineering, received the 2013 Outstanding Achievement Award from the Industry Application Society.

Bense then highlighted key University initiatives for the 2013-2014 academic year, which she described as a time of implementation for the 2012-2017 Strategic Plan.

The Division of Academic Affairs is in the beginning phase of academic reorganization, which includes dialogues within the campus community. A final draft of the reorganization plan is expected to be submitted in December to Provost Martha Saunders.

“The last time we reorganized our colleges was in 1999,” Bense said. “It is time for us to review our structure and make changes that will mirror our vision for the future.

Bense also provided an update of the Campus Master Plan, including the selection of Balfour Beatty Campus Solutions as master developer for the Business Enterprises, Inc. University Park and Northwest Village project. This development will allow the university to move toward a more traditional campus and enhance student life.

“University Park is envisioned to create a sense of place for our students, to be in the heart of campus as a vibrant and active gathering place that creates affinities and brings alumni back to campus year after year,” she said.

Bense concluded her address by highlighting UWF’s new and future athletics programs. The women’s swimming and diving team, under the direction of head coach Andrew Hancock, will compete in its first meet against Florida State University and Tulane University on Oct. 11.

“For the very first time in history, we are going to host a swim meet,” Bense said.

She highlighted the Board of Trustees’ recent approval of a resolution to support UWF’s decision to add a football team. A head coach will be hired in Spring 2014, and the team will play a full season of scrimmages before its inaugural season in Fall 2016. For the initial seasons, games will be played at the Community Maritime Park stadium.