The University of West Florida Historic Trust hosted a ribbon cutting ceremony today to celebrate the Fort of Pensacola’s Commanding Officer’s Compound, a new outdoor exhibit located in Museum Plaza behind the T.T. Wentworth Florida State Museum. This project marks the first major reinterpretation of a stop along the Colonial Archaeological Trail, highlighting the rich history of downtown Pensacola. 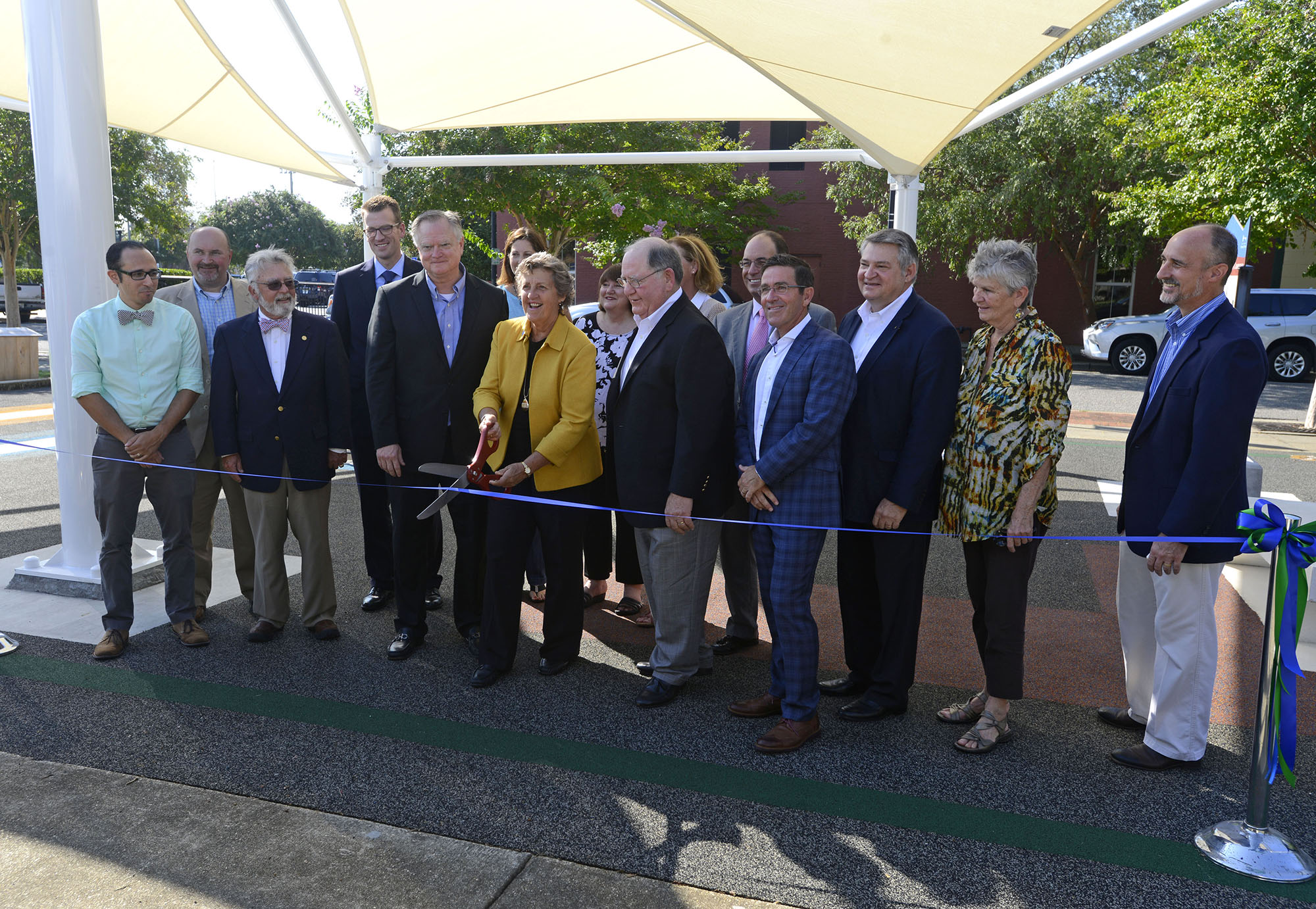 “This is the first of many exciting developments to come in the near future for historic Pensacola,” said UWF President Judith Bense. “Downtown Pensacola is home to a rich history that deserves to be preserved and featured in a way that will engage and attract both residents and visitors. The new Commanding Officer’s Compound is a strong example of the perfect balance between historical preservation and historical education that will help tell the story of Pensacola’s past for years to come.”

The new exhibit features large interpretive panels and colorful ground markings that highlight important archaeological features discovered in one of the many excavations of the site and provide an easy reference to the different time periods that make up Pensacola’s history: First Spanish; British; Second Spanish; and American.

Spanish soldiers built the first structures at the exhibit’s location, which became Fort San Miguel in 1756. The British arrived in 1763 and expanded and rebuilt structures for their commanding officer at the same location. When the area returned to Spanish control, it became the military administrative center of Pensacola.

Excavations at the site revealed outdoor brick cooking ovens located inside the British fort wall just east of the Wentworth Museum. Visitors can see the brick remains of a bake oven and the foundations of an American Period Masonic Lodge. The site is also ADA accessible and offers shade and seating to provide a better visitor experience.

The project is part of the UWF Historic Trust’s Interpretive Master Plan, which was launched in Fall 2015. The master plan details the transformational vision for Historic Pensacola through a series of appropriate and achievable enhancements to provide balance between resource protection, historical education, visitor and recreational use and enjoyment of the 8.5 acre, 28-property complex.

“The UWF Historic Trust is making the best use of the University’s unique assets in downtown Pensacola,” said Dr. Brendan Kelly, vice president for University Advancement. “There is much more ahead during the coming year.”

The project was funded in part by a preservation grant through the state of Florida’s Division of Historical Resources and completed by a project team comprised of the UWF Historic Trust, UWF Archaeology Institute, Florida Public Archaeology Network and UWF’s University and Marketing Communications Department. The design and construction team included Wescon Corporation, DAG Architects and Joe DeReuil Associates.

To learn more about the UWF Historic Trust, visit www.historicpensacola.org.