A University of West Florida mathematics and statistics professor recently contributed to a study proving that sharks can comprehend body orientation and therefore know if humans are facing them or not before attacking. 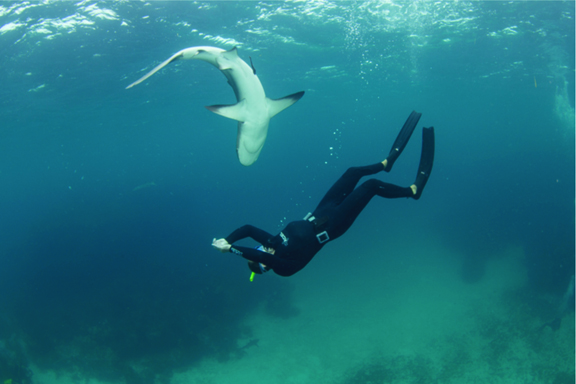 Dr. Raid Amin collaborated with Dr. Erich Ritter, a shark-human interaction specialist with the Shark Research Institute, to study the behavior of sharks as they approach prey to attack in an effort to deepen the understanding of shark attacks on humans. For two years, the researchers designed and implemented a test to determine if sharks show a measurable preference based on body orientation when approaching a person, and if they choose a certain swim pattern as they get closer to the person.

“The feedback on our study from highly respected scientific journals has been a highlight of this experience,” Amin said. “I spent four years working on such research projects with Dr. Ritter, and it is rewarding to see the fruit of that hard work now.”

To ensure the safety of the test subjects, the researchers selected the Caribbean reef shark, which is not considered dangerous regarding incidents with humans, for evaluation. In one experiment, a diver in full scuba gear was positioned on the sea floor in a kneeling position, looking forward. In another, two divers kneeled back-to-back to eliminate a blind spot.

Amin and Ritter found that when approaching the single test-subject, significantly more sharks swam outside the person’s field of vision. When approaching both subjects facing forward, the sharks would swim away, suggesting that sharks can identify human body orientation. The mechanisms used and factors affecting the nearest distance of approach are still unclear.

Amin has worked with Ritter and UWF mathematics and statistics graduate students to co-author several articles related to shark research. This was the first article chosen for publication by Springer, an international publishing company. It was published in Animal Cognition, an interdisciplinary journal, and chosen for Springer Select as groundbreaking research. The study was also featured in the Dec. 14 issue of The Economist.