The University of West Florida is celebrating the success of the 50th Anniversary Capital Campaign, which raised more than $64.4 million by almost 20,000 donors, including 55 planned gifts and nearly $18 million in scholarships. 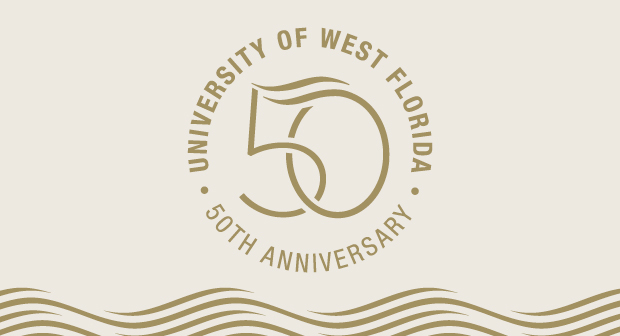 “We are truly grateful for the generosity of the community we serve, the alumni we have graduated and the friends we have made over the years,” said UWF President Martha D. Saunders. “Their belief and willingness to contribute to the work we do has created a spirited community of learners launching the next generation of big thinkers who will change the world.”

The campaign’s priorities for areas of giving in alignment with the University’s future vision were outlined as follows: health sciences; science, technology, engineering and math, or STEM; business, economic development and valued partnerships; historic preservation, education and tourism; scholarships; and athletics.

Other notable gifts included $3.1 million from an anonymous donor to establish an endowment for need-based scholarships that will assist deserving students in their pursuit of the American Dream, and $1 million from Dr. Bob Kimball, UWF marketing and economics professor, to create the Bill and Ellie Kimball Memorial Undergraduate Scholarship Award in memory of his parents.

“Our donors believe in the transformative power of higher education and demonstrate it with their invaluable support,” said Howard J. Reddy, interim vice president for university advancement. “We thank them for their vital investment in helping move UWF forward.”

The University raised more than $48 million of the campaign’s total during its quiet phase, which launched in 2011. In 2012, Quint and Rishy Studer gave their first of two $1 million gifts, to fund the Pensacola Pledge Scholar Program. The second $1 million gift was given in July 2015, to develop the Center for Entrepreneurship.

Pen Air Federal Credit Union committed $1 million to name Pen Air Field, home of UWF football on the Pensacola campus, while $250,000 of a $770,000 legacy gift from the estate of John Thayer and Joan Ames Burr served as the lead gift for football, with the remainder supporting high impact and undergraduate research initiatives in the Hal Marcus College of Science and Engineering.

With the momentum gained from the 50th Anniversary campaign, the University is looking ahead to its future growth. One key upcoming development in the University’s future vision is the Innovation Campus Network, a “transformative university model” that will connect physical campus destinations along the Gulf Coast of Northwest Florida for innovation, collaboration, research and engaged learning to prepare students for the changing world and workforce of tomorrow. Among its main priorities, the Innovation Network will create “knowledge centers” fostering partnerships among UWF students and faculty, state colleges, industry experts, K-12 educators and the community, and providing enhanced opportunities for multidisciplinary learning, research and discovery relating to high demand career fields, such as cybersecurity, supply chain logistics, advanced manufacturing and STEAM.

For more information about giving to the University of West Florida, visit uwf.edu/give.