The eighth annual University of West Florida Dance Marathon raised a record $87,838.21 on Feb. 29 in support of Children’s Miracle Network Hospitals, a nonprofit organization that raises funds for pediatric hospitals, medical research and community awareness of children’s health issues. All proceeds from UWF’s event will be donated to the oncology unit at Pensacola’s Studer Family Children’s Hospital at Sacred Heart, a member of the Children’s Miracle Network. 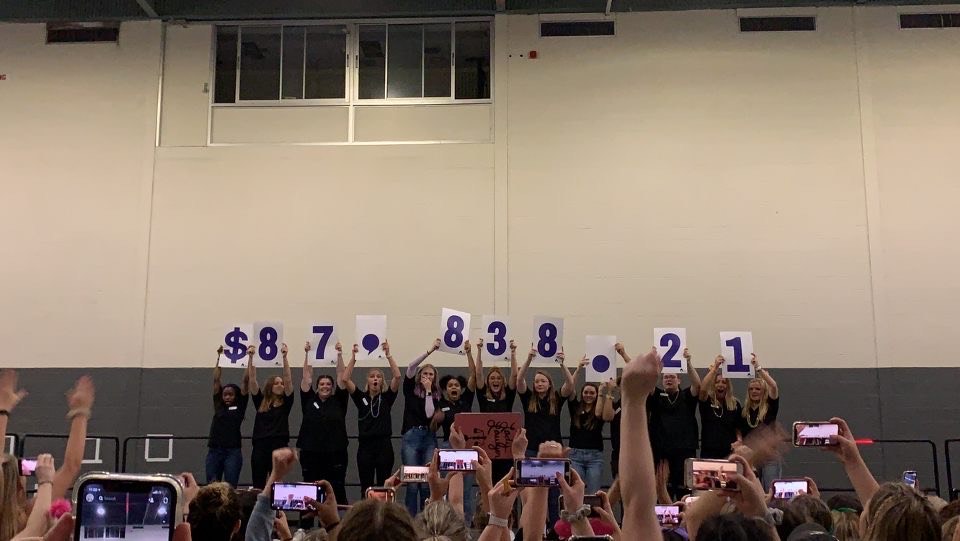 During UWF Dance Marathon, participants stand on their feet and dance for 10 hours in support of children who cannot. The event was held in the UWF Field House.

“Dance Marathon at UWF is an amazing event for a great cause,” said Dr. Brandon Frye, associate vice president, Division of Academic Engagement and Student Affairs. “I am very proud of our students, and excited about the work that they have done with the Dance Marathon event over the last eight years.”

The amount raised smashed the previous Dance Marathon record of $60,890.59, set in 2018. Mya Clark, a senior journalism major and executive director of the event, credited initiating Dance Marathon fundraising activities earlier than in previous years for the record amount. The fundraising activities kicked off in October during Homecoming Week with a cookout on the Cannon Green.

“We were more engaged and had more activities to get people involved and excited about it,” Clark said. “The cookout on the Cannon Green got things going in the right way. People were excited from the start.”

The Miracle Network Dance Marathon is held at more than 400 locations across the country and has raised over $300 million since 1991.

UWF fraternities, sororities and other student organizations raised funds as teams for the event and competed in the “Miracle Ball” to see who could raise the most money and create the most awareness for the event through social media and spirit nights. A total of 453 students from 17 teams participated in UWF’s 2020 Dance Marathon. Miracle Ball winners were split into three divisions based on the number of members in the organization:

For more information about Fraternity and Sorority Life, visit uwf.edu/fsl.