This summer, graduate and undergraduate students at the University of West Florida will have the opportunity to embark on a journey through time in the Department of History’s newest intensive summer reading and travel course, Securing the American South: The Creek War and War of 1812. 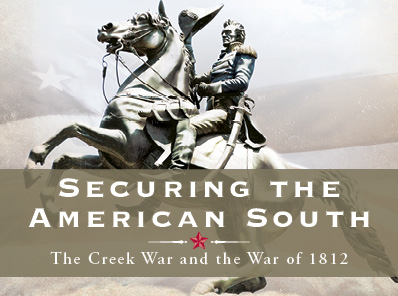 The innovative course will expand the learning process by taking students beyond the traditional, lecture-style classroom and introducing them to history firsthand through a broader cultural perspective and background with expansive interpretation.

“This is the kind of course that makes learning come alive,” said UWF Provost Martha Saunders. “Students who participate in this program, a High Impact Practices offering, will come away with an experience that will benefit them long after they graduate from UWF.”

During the course, students will visit seven prominent sites in Alabama, Louisiana and Florida. Each site visit will include a guided tour by leading scholars, noted in their field and well published on subjects concerning the Southern frontier.

In recognition of the bicentennials of the Creek War, the War of 1812 and the First Seminole War, the course will highlight the larger cultural, social, economic and political ramifications of Indian, African, European and American interaction on the Southern frontier from the later 1600s to the mid-1800s.

“Two hundred years ago, this single, interconnected struggle dramatically influenced the course of American history,” said Dr. William Belko, with the Department of History. “It was a struggle that determined the future of not only the American nation, but also that of the numerous participants fighting for their very survival and freedom – the American Indian and the African American – as well the course of two of the world’s most storied empires – the British and the Spanish.”

“These conflicts permanently secured the American South, expanded the American nation to the Gulf of Mexico, opened extensive routes to world markets, and commenced a period of aggressive American westward expansion across the North American continent,” said Belko.

Students will also meet on campus to discuss readings that will provide them a larger understanding of the import conflict and the various people involved, as well as attaining the necessary depth regarding the contributing individuals, specific events and consequences of the interrelated conflicts, all of which changed the course of American history.