Shortly after the University of West Florida hired him as a biology professor in the spring of 2018, Dr. Frank Gilliam walked the Pensacola campus in awe of the majestic canopy of trees. 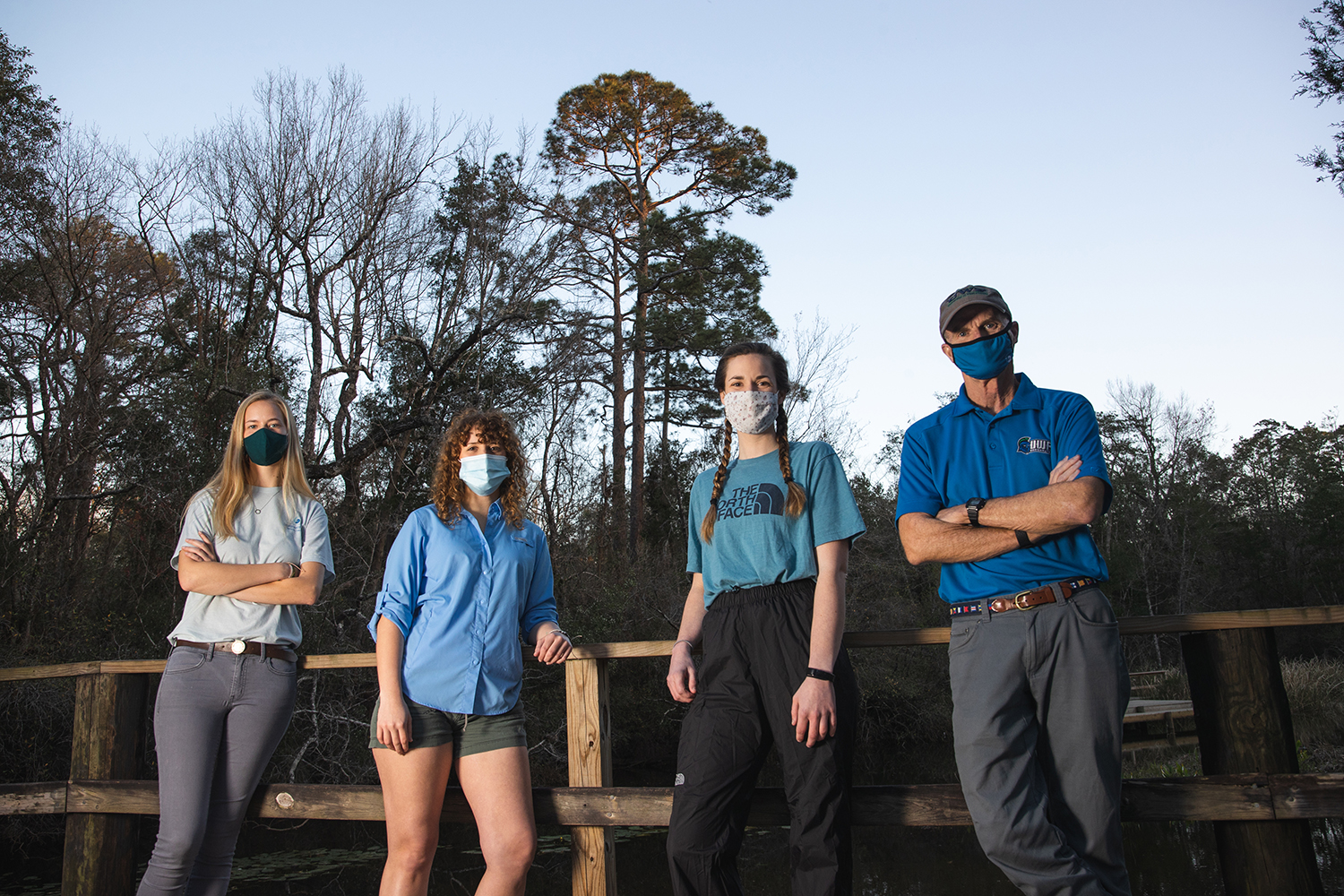 “I’m thinking, ‘this place is amazing’,” Gilliam said. “I’m looking at these longleaf pines, big wide oaks and magnolias and realizing someone must have had a design in mind to keep nature preserved. Turns out it was a campus designer named John Jarvis. We owe him a huge debt of gratitude.”

Influenced by a Swiss land presenter whose design philosophy focused on nature, Jarvis designed a campus that accentuates its aesthetic surroundings. His design called for cutting down as few trees as possible and paved the path for UWF to earn 2020 Tree Campus Higher Education recognition by the Arbor Day Foundation after earning the designation the previous year.

Fascinated by the campus design, in particular the vast number of longleaf pines, Gilliam secured funding through the Summer Undergraduate Research Program for students Emily Harmon and Skylar Boyles to conduct extensive research in 2019. Their study examined burrowing effects on soils and plant communities by gopher tortoises and estimated the age of longleaf pine trees around campus to assess the influence of human activity on population structure.

The undergraduate students spent those summer mornings drenched in sweat as they sampled 16 gopher tortoise burrows in the open habitat of powerline right-of-ways off the Edward Ball Nature Trail and measured over 2,100 longleaf pine stems around campus. Their results showed that gopher tortoises act as “ecosystem engineers,” enhancing plant biodiversity through altering soil fertility and patchiness in the landscape. Their data also revealed that nearly two-thirds of longleaf stems on campus range between 75 and 125 years old, results consistent with the cessation of extensive logging of longleaf in Northwest Florida, and that the oldest is approaching 200 years old.

“I found it really interesting that the oldest tree at UWF was like 175 years old,” said Harmon, a lab analyst at TestAmerica who graduated in 2020 with a bachelor’s degree in environmental science. “I didn’t expect to find a tree that old.”

Boyles and Harmon co-authored a paper on their research in the international peer-reviewed journal, Urban Ecosystems, published in January 2020. Biology majors Katelyn Bray and Emily Major and marine biology major Selina Detzel conducted similar research last year through funding from the Summer Undergraduate Research Program and authored a paper that Urban Ecosystems published this past February.

For their 2020 SURP project, the three students researched how composition and structure vary between two familiar natural areas on campus–the Ball Nature Trails and the Baars-Firestone Wildlife Sanctuary–examining how soil characteristics vary between areas and change under fire exclusion. They also compared the size structure of longleaf pines on campus and other campuses within the natural range of longleaf pines. Similar to their predecessors, the students put in long hours in the humid summer heat, but found their research to be rewarding academically and potentially someday professionally.

“I gained a lot of field experience that I hadn’t had yet,” Detzel said. “There were sheets I had to fill out every time and I had to get in the groove of inputting coordinates and all types of things that are important in research. I’ll be able to put it on my resume and show that I was actually a part of something important. Just the field experience will help me down the road.”

Through their research, the students found the basal area and density between the natural areas with large trees to be similar, but different among the small trees on campus. Soil analyses revealed no significant differences between natural areas, but suggested that fire exclusion decreased soil organic matter and fertility with establishment of hardwood species, such as live oak. Diameter structure of longleaf pines contrasted sharply between natural areas and the main campus, suggesting different people owned sections of the land before the campus was built. Finally, their research found a wide array of approaches to longleaf pine ecology by institutions of higher education within its natural range, indicating the importance of establishing a longleaf pine consortium to coordinate information.

One common conclusion from the two studies is that longleaf pines stand out on a campus among the pines due to their physical stature, frequency and density.

The National Wildlife Federation reports that the longleaf pine ecosystem once extended 90 million acres from southeastern Virginia to Florida and west through Louisiana to east Texas. In the late 1800s through early 1900s, builders cleared the area to make space for development and agriculture and used the lumber to build ships and railroads. Instead of replanting longleaf, foresters often planted faster growing pines, such as loblolly pine.

Today, longleaf pines cover less than 3% of that range and NWF has prioritized restoring the ecosystem in the Southeast. In February, the Pensacola City Council came to the defense of longleaf pines, too. The council passed an ordinance adding longleaf pines to the list of protected trees in the city.

“We have impressive longleaf pines all over our UWF campus,” Gilliam said. “We are in the hub of the amazing longleaf pine ecosystem.”