Through a unique internship experience, UWF junior Joshua Brown had the opportunity to be a part of an HIV research team at the University of Maryland Baltimore County (UMBC). Brown has been working with Dr. Mike Summers, professor at UMBC, and has proposed four compounds that may potentially inhibit HIV. 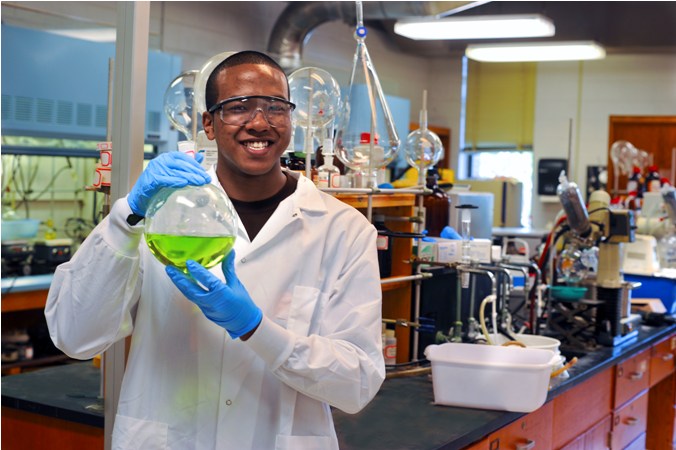 Brown attended the Summer Biomedical Training Program at UMBC last June and began his research with the team. After completing the 10-week program, Brown was asked to return in December 2011, this time for three weeks.

“Josh is an extremely bright and motivated young man. He made terrific progress on a project aimed at developing a new class of antiviral molecules that bind to the HIV-1 capsid protein and inhibit viral maturation,” said Summers. “His progress exceeded that of some of the graduate students in our Ph.D. program, so I invited him back to the lab this past winter so he could finish his work.”

Summers said Brown is taking the project to a new level by attempting to chemically synthesize the compounds he designed.  This could potentially lead to a new therapeutic approach for the treatment of AIDS. Mike Huggins, chemistry department chair and associate professor at UWF, will be working closely with Brown in synthesizing the compounds. Once the compounds are created, they will be sent to the lab at UMBC to test for their ability to inhibit the virus.

“Dr. Huggins is an organic chemist, so he specializes in making compounds,” said Brown. “I really appreciate his help, because without him I would not be able to make my ideas come to life.

“I am happy to work with Josh on such an exciting project,” said Huggins. “He is an extremely talented and creative scientist.”

Brown, who graduates in May with a degree in biochemistry, plans to attend graduate school at UMBC so he may continue his research with Summers and the rest of the team.

“The great thing about UWF is that because it is a bit smaller than some other universities, I was able to get so much lab experience,” said Brown. “It definitely gave me an edge during my internship at UMBC.”

Once Brown finishes his postgraduate studies, he plans to continue on with his research, whether on HIV or another path.

“Ultimately I want to be able to do research along with clinical work,” said Brown. “I have a strong interest in working with patients that are affected by what I’m researching; for example, HIV.”

“I was originally planning on going to medical school to be a surgeon,” said Brown. “However, spending my time focusing solely on research last summer made me realize it’s something I truly want to do.”