The Mobile Patriots visited the University of West Florida (UWF) Tuesday night for the tenth year in honor of Disability Awareness Month. A rowdy crowd attended an exhibition game between the Patriots and teams of UWF faculty, staff and students and members of the Pensacola Community. 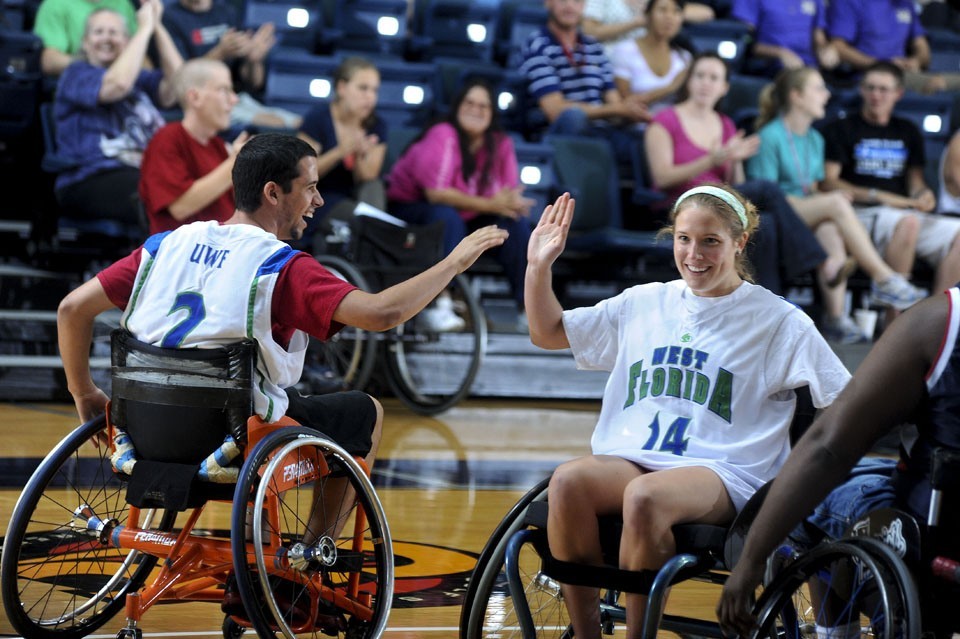 “This event is always awesome,” said Alesia Ross, coordinator, Alumni Services and Programs and a member on the committee for the event. “The crowd was pumped, and it was a really great time. It takes events like these to open our minds to who these individuals with disabilities really are and what they go through on a daily basis.”

Members of UWF’s Greek community, men’s and women’s basketball, Army and Air Force ROTC, and faculty and staff took the court against the Patriots, and despite being given double-digit advantages from tip-off, the Patriots won the game with a final score of 116-114. Special guest Bree Sison, from WEAR – TV Channel 3 joined the UWF team for the first quarter as well, putting up quite a fight against the veteran Patriots.

The athleticism of the Patriots players wasn’t lost on any of the players for UWF.

“The Patriots were incredibly gracious and outstanding athletes,” said Jay Massey, director of web services and a player on the UWF team. “Being height-disadvantaged, standing on my feet trying to shoot a basketball is hard enough, but sitting in a wheelchair with five Patriots trying to steal the ball away from you is nearly impossible.

Joann Massey, a rehab psychologist at West Florida Hospital, attended the game to watch her husband play on one of the UWF teams, but the meaning behind this event also hits close to home for her.

“I work a lot with spinal injury patients, so I love to come out and support people who are willing to go above and beyond their disability by playing sports,” said Massey. “Sometimes my patients think their lives will be over, but that’s not true. They find out that there is more to life than just an able body, and events like this prove that.”

UWF Recreation and Sports Services provided a student officiating crew for the event, although it was a clean game with few fouls called.