University of West Florida freshman Brandon Lawrence describes himself as a “miracle baby.” His mother was diagnosed with advanced multiple sclerosis while pregnant with him and died from complications three days after his 5th birthday. 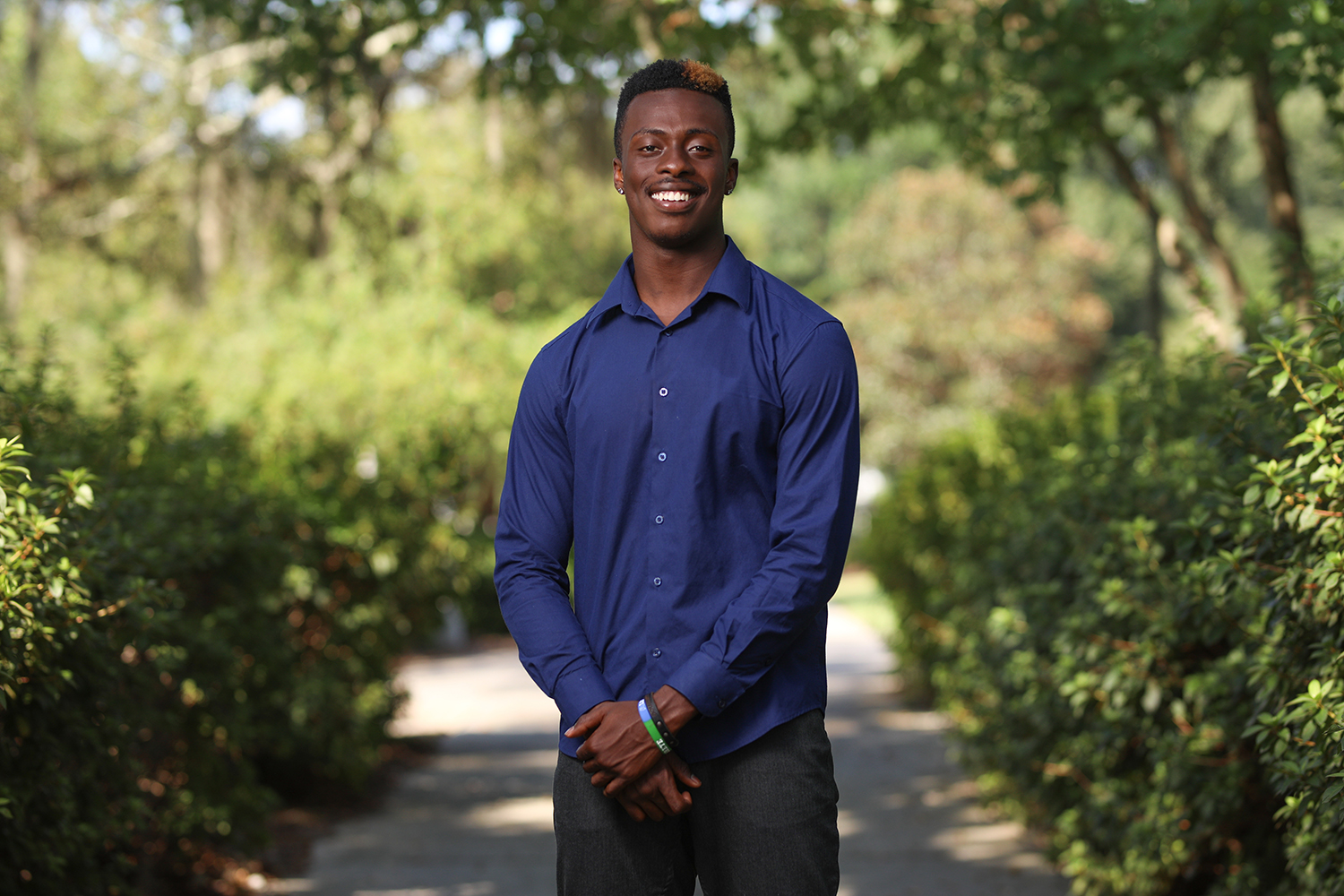 Lawrence lost his mother at a young age, but he said she positively influenced him in their precious few years together.

“Her body was deteriorating, but she was always comforting, always had nice things to say,” Lawrence said. “No matter the situation or environment we were in, she stayed positive.”

Lawrence approaches life with a similarly positive attitude and an unbreakable faith, which have been put to the test by countless obstacles. As a student at Southwest Florida Christian Academy in Lehigh Acres, he balanced school, football, part-time work and helping his dad care for his sister, Kayla, who suffered permanent brain damage from a failed medical procedure. Lawrence’s perseverance was awarded with an Argo Spirit Scholarship from UWF.

Offered by UWF for the first time this fall, the Argo Spirit Scholarship is the first full-ride, competitive scholarship that is not based on academic merit. It’s awarded to first-time-in-college Florida resident students who demonstrate strength of character, or “Argo Spirit.”

“Introducing the Argo Spirit Scholarship is another step toward increasing accessibility to higher education at UWF,” UWF President Martha D. Saunders said. “This scholarship is an opportunity to view a student holistically and recognize and reward scholarship recipients who have shown strength in areas in addition to academics.”

Argo Spirit entails overcoming obstacles, fighting for something important and making an impact while in high school, whether it’s through exemplary leadership, family contributions or community engagement. The scholarship clears the path to college for students like Lawrence, a pre-nursing student who is redshirting for the football team.

“Many of UWF’s undergraduate applicants are uniquely talented, often times overcoming adversity to achieve their high school degrees,” said Katie Condon, executive director for UWF undergraduate admissions. “The Argo Spirit Scholarship rewards these students who have truly defied the odds and emulate the determination and spirit upheld by UWF.”

“You have to fight for everything in the world, no matter the struggle,” Lawrence said. “I learned from my father how to be strong and fight for what I believe in.”

Lawrence said he discovered at an early age that life isn’t always fair and he has to keep his head up when circumstances are beyond his control. He sometimes felt isolated as a child seeing other kids with both their parents and as a teenager missing out on movie nights to stay home and watch his sister while his dad worked. Lawrence credits a Bible verse from the book of Jeremiah for providing him words of encouragement through those challenging times.

But the Lord is with me like a mighty warrior; so my persecutors will stumble and not prevail. They will fail and be thoroughly disgraced; their dishonor will never be forgotten: Jeremiah 20:11.

UWF football provides Lawrence a brief but valuable reprieve from family tragedy. His focus shifts once he straps on his helmet and steps between the white lines for practice.

“I have all of this going on at home, but for those two hours a day it’s an escape from the stress,” Lawrence said. “It’s brought some comfort to me. Football has kept my head on straight.”

UWF Assistant Head Coach Steve Saulnier recruited Lawrence, who shone bright on the football field and in the classroom at Southwest Florida Christian Academy. Lawrence scored 11 touchdowns his senior season and was a member of the National Honor Society with a 3.6 GPA. After learning about all the obstacles Lawrence had overcome to be a standout student-athlete, Saulnier encouraged him to apply for the Argo Spirit Scholarship.

“Brandon Lawrence is a total overcomer,” Saulnier said. “With what he has to deal with and just how appreciative he is, it just shows up. He’s a real warrior. He’s well deserving of the Argo Spirit scholarship.”