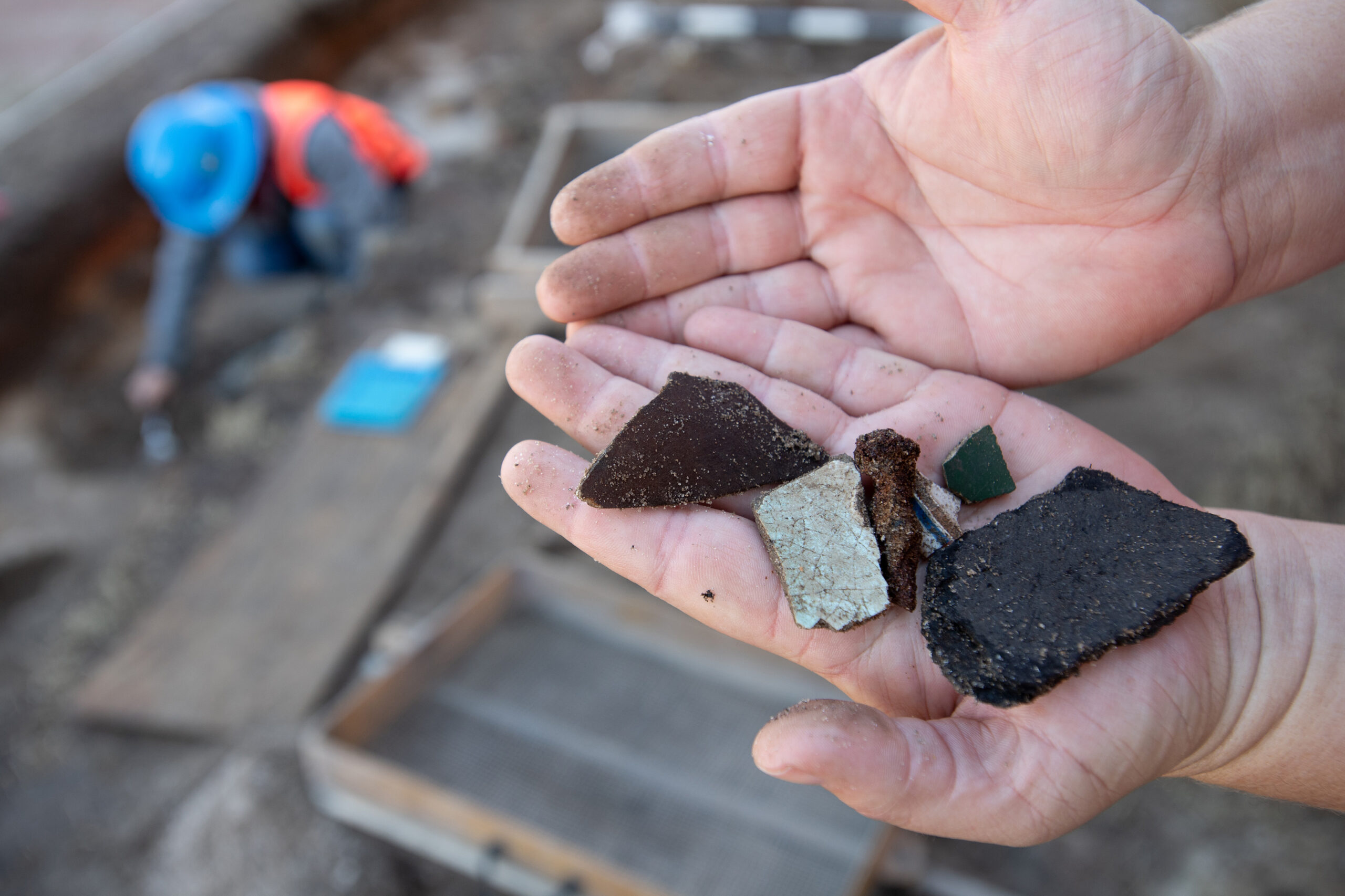 UWF researchers have been working in concert with Gulf Power since May 2018 as the utility replaces aging power lines as part of a five-year, $83 million project to modernize the 70-year old power network.

“Once they get the pavement up, we hand excavate it right away,” said Dr. Elizabeth Benchley, director of the Archaeology Institute at UWF. “And then (Gulf Power) brings in their machines, and we watch and record what they come up with that might be different from what we documented.” UWF archaeologists have been able to uncover finds from Pensacola’s First Spanish, British, Second Spanish, and American periods along Jefferson and Zaragoza streets.

“(Gulf Power) has been flexible with us,” said April Holmes, staff archaeologist with the Archaeology Institute. “They are giving us the time to document all the intact deposits and colonial features before they do their work.”

Some of the remains uncovered include a series of barrel wells that date to First Spanish, British, Second Spanish, and American periods. The wells were constructed by hand excavating a large pit down to the water table (about 7 feet down in this part of Pensacola), and then placing an upright barrel that has had its ends removed into the water. A second barrel may be stacked on top of the first, and then the whole construction pit is backfilled, leaving an open shaft to the water inside the stacked barrels. Archaeologists can discern and record the disturbed sediments in the construction pit, the remains of the barrels and the fill inside the well.

Datable artifacts, such as broken sherds of pottery bowls and plates, can be used to estimate when the well was dug and when it was abandoned. After the well is no longer used, it is often filled with trash including animal bones, broken bottles and dishes, nails and other debris. In two cases on the Gulf Power project, UWF archaeologists have recovered intact barrels preserved below the water table. One barrel dated to the American period, and the other appears to have been Second Spanish in age.

“When we got down to the water table, the actual wood was intact from the barrel, and we recovered the staves and brought them up to the University,” Holmes said.

Dr. John Bratten, chair and professor of anthropology at UWF, is among those working to conserve the barrels.

Benchley said that in colonial times barrels were used much as cardboard boxes are today.

“They shipped all kinds of stuff in them and then would reuse them for storage or eventually put them in the ground to line a well,” Benchley said.

There is the potential for more promising archaeological finds as the Gulf Power project progresses.

“As we get more toward Barracks Street, one of the colonial maps shows that the original warehouse that the Spanish built here in 1740-41 will be crossed by the construction project,” Benchley said. “That’s what I’m most excited about. We haven’t dug a lot of warehouses.”

The project offers a unique opportunity for archaeologists at UWF, Benchley said.

“We’re excited about this because we don’t often get to look at the remains of the colonial settlement in Pensacola’s urban environment,” Benchley said.

The artifacts discovered so far, which will eventually be housed in the Archaeology Institute, are being processed by students and institute staff.

“These are graduate and undergraduate students, and more of them are going to be training with us after the new year,” Holmes said.

UWF’s contract with Gulf Power will be reviewed and renewed on an annual basis. Benchley credited the UWF Office of Research and Sponsored Programs for helping broker the agreement.