Faculty researcher Joseph Moss is one of 16 finalists competing for the Cade Museum Prize for his invention that detects harmful disease-producing organisms in water. 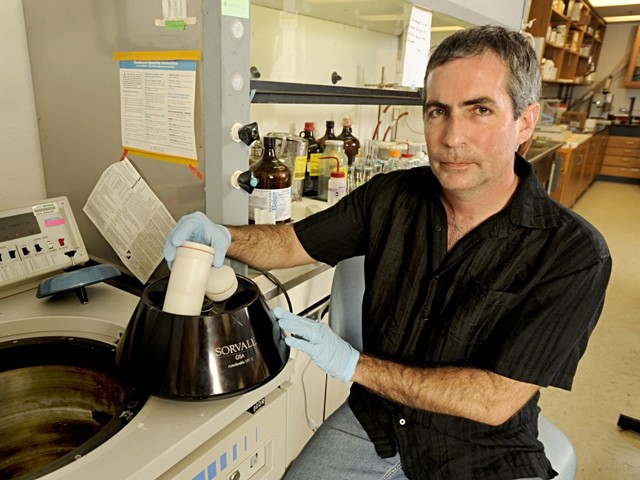 Faculty researcher Joseph Moss is one of 16 finalists competing for the Cade Museum Prize for his invention that detects harmful disease-producing organisms in water.

Winners receive a $50,000 cash prize and $10,000 in legal services to further develop the invention. More than 120 applicants competed for the prize awarded by the Cade Museum for Creativity and Innovation.  The final four candidates will be announced on April 23, and the winner selected on May 11.

“It’s quite nice being recognized as one of the top contenders in this contest,” Moss said. “To be honest, I was not expecting it. Being a finalist provides encouragement and motivation to carry on additional related work.”

His filter, called a spin concentrator, can detect pathogens like “traveler’s diarrhea” or cryptosporidiosis and parasites like Giardia lamblia that may be found in water contaminated by sewage.

These diseases can cause terrible gastrointestinal symptoms in humans, pets and livestock that may last for weeks, Moss said. For people with already weakened immune systems, they can be life threatening.

Necessity is the mother of invention, Moss said. Originally, colleague Richard Snyder, a professor and director of UWF’s Center for Environmental Diagnostics and Bioremediation (CEDB), saw the need for a more cost-effective method than was currently available.

Currently, researchers may spend up to $400 to analyze water samples, and analysis takes hours. Moss’s invention costs only about $40 and takes less than a half hour to use.

Moss assists in several additional research projects for the CEDB, most of which involve microorganisms, including the development of improved methods to detect certain pathogens in drinking water, the Department of Environmental Protection (DEP) StormSurge project and the Florida Institute of Oceanography/BP FSU Coastal Watch initiative.