The University of West Florida Historic Trust opened the Trader Jon’s exhibit at the T.T. Wentworth Jr. Florida State Museum today to the public. The exhibit, featuring the iconic Pensacola bar, will be on display at the Wentworth Museum for the next three years. 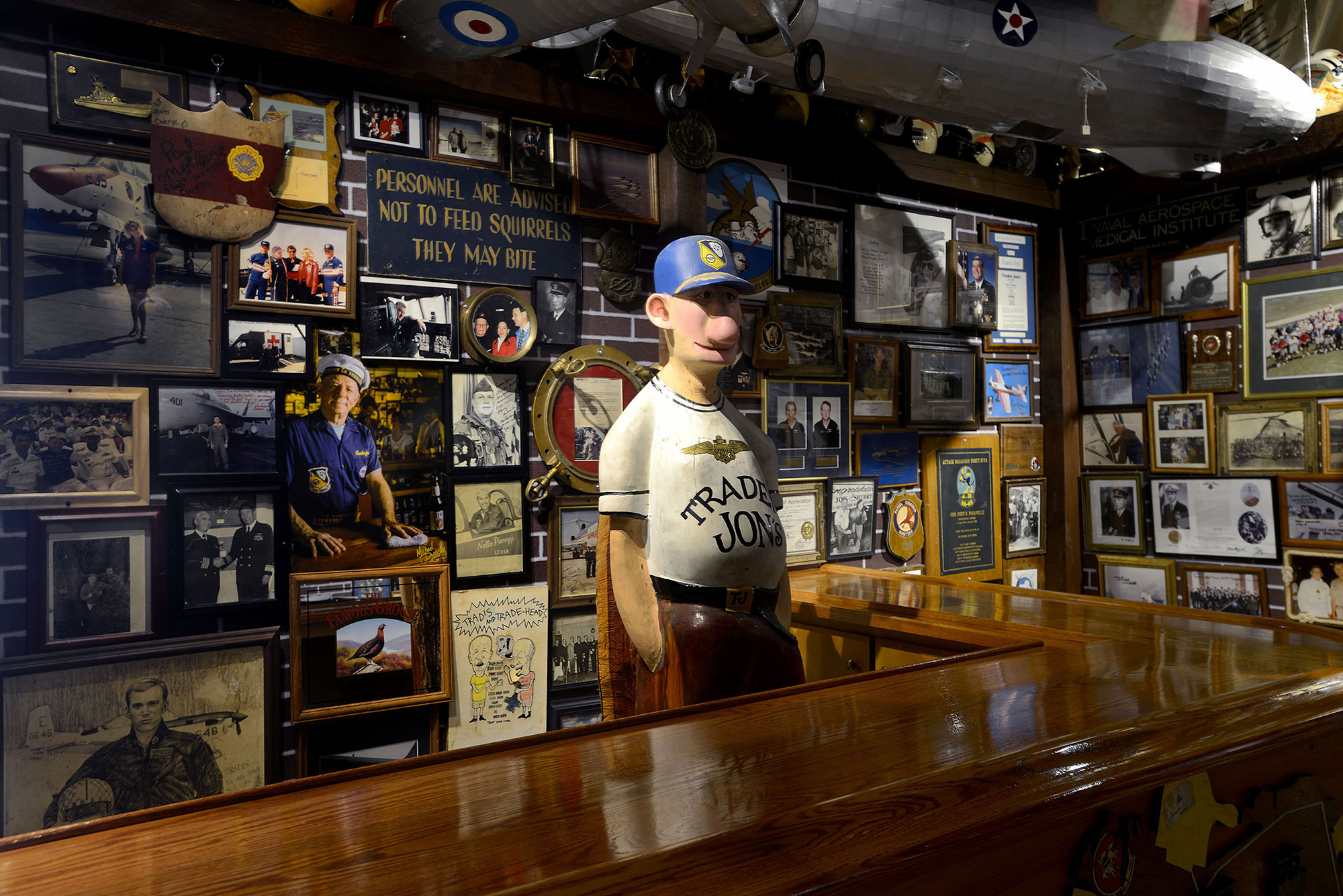 “We hope that this exhibit brings back fond memories for those who visited Trader Jon’s,” said Robert Overton, executive director of the UWF Historic Trust. “We also feel that Trader Jon’s was a memorial to our military and naval aviation in particular, and hope that this new exhibit will serve as one, too.”

Located on the museum’s second floor, the exhibit opens with the front door of the bar and features memorabilia from the Trader Jon collection, including model airplanes that once hung from the ceiling, flight suits and signed photos of celebrities. Other highlights of the exhibit include a replica bar, as well as a miniaturized re-creation of the bar’s Blue Angels Museum room and video recordings of the legend himself, Martin “Trader Jon” Weissman, telling his story.

“This exhibit is unique in that it will resonate not only with the local community, but also with those service members who frequented Trader Jon’s while they were stationed in Pensacola and are now spread across the globe,” said Dr. Brendan Kelly, vice president for University Advancement and CEO of the Historic Trust. “We wanted to give those who had the pleasure of visiting the real Trader Jon’s an opportunity to revisit history and allow those who didn’t to experience it for the first time.”

Trader Jon’s opened on Jan. 1, 1953, by Weissman, a Brooklyn native and Army veteran who operated bars in Miami and Key West before settling in Pensacola. Located at 511 Palafox St. in downtown Pensacola, the bar was known for its unique atmosphere that perfectly matched its eccentric owner.

Trader Jon lived up to his name by trading drinks for military memorabilia and other items of value that would then decorate the walls and ceiling of the establishment. Over time, the Trader Jon collection grew to include more than 10,000 items valued at more than $2 million. Notable items include a tailhook rhinoceros, leather saddle that was gifted to Trader Jon by John Wayne, a flight suit belonging to Bob Hope and more.

The building was designated a historic site in 1992. Trader Jon’s was closed temporarily in 1998 after Weissman suffered a stroke, before being purchased and reopened in 2000 with plans to make it a live music venue. When the bar was permanently closed in November 2003, the Pensacola law firm of Aylstock, Witkin and Sasser purchased the Trader Jon’s collection and donated it to the Naval Aviation Museum Foundation. It was later transferred to the University of West Florida.

The T.T. Wentworth Jr. Museum is open Tuesdays and Wednesdays from 10 a.m. to 4 p.m., Thursdays through Saturdays from 10 a.m. to 7 p.m. and on Sundays from noon to 4 p.m. To learn more about the Trader Jon’s exhibit and for museum hours and ticket pricing, visit historicpensacola.org.