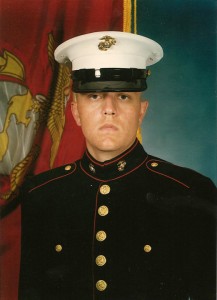 On Sept. 12, 2001, just one day following the terrorist attack on the World Trade Center, the United States Marine Corps gained a young man ready to serve his country at any cost.  After completing two tours in Iraq, one that left him severely wounded, veteran student Robin “Griff” Griffiths is transitioning well to college life at UWF.

“I come from a military family, so I had been looking into military service for a while,” said Griffiths. “After the attack on Sept. 11, I felt obligated to serve my country and defend it.”

Griffiths was assigned to the Second Marine Division and served two tours overseas as part of Operation Iraqi Freedom. During his second tour in 2005, an insurgent mortar attack on his FOB (Forward Operating Base) left him with third degree, full-thickness burns on 33 percent of his body, a fused left elbow and multiple shrapnel wounds. Griffiths was medically retired from the Marine Corps on May 29, 2006.

“On January 27, 2005, a mortar came in the FOB and hit the tent I was sleeping in,” explained Griffiths. “I was medevaced (medical evacuation) to San Antonio, Texas, where I did my rehabilitation.”

He spent nearly 18 months in rehab and then moved with his wife and two kids to Florida in 2007. He began studying at Pensacola State College in 2008 and enrolled at UWF in the fall of 2010.

In addition to his busy school schedule, Griffiths is active in coaching his 7-year-old son’s sports teams.

“I coach his T-ball team in the spring and his football team in the fall,” said Griffiths. “I think I have just as much fun coaching them as the kids have playing the sport.”

Griffiths works in the Veterans Services Office at UWF helping other military and veteran students apply for their education benefits to start their college careers.

“It’s great to work with veterans and kind of give back a little bit,” said Griffiths.  “I love getting to know the students and people at UWF. That’s what really sets this place apart from other schools I’ve been to.”

With graduation on the horizon, Griffiths plans to go back to government work. He is studying international affairs and will graduate in August 2012. Although Griffiths has begun a new chapter in his life as a full-time college student at UWF, he fondly remembers his time as a Marine.

“I have a deep respect for the bond that is formed between service members,” said Griffiths. “My time in the Marine Corps was exciting, fun and rewarding, and you get out of it what you put in.”