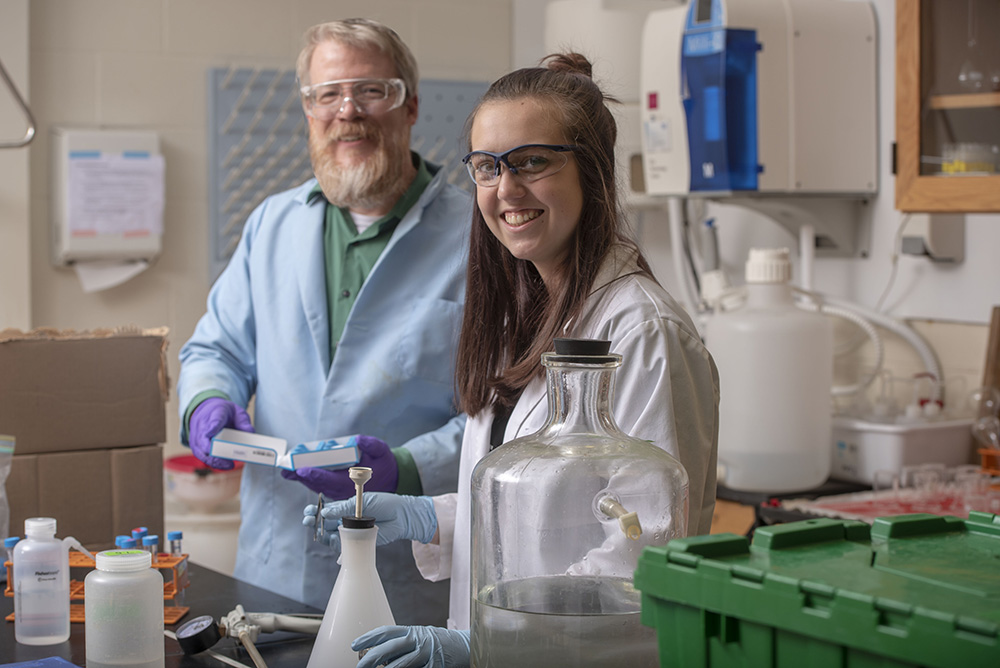 Students pursuing careers offering job growth and higher starting salaries often begin their search in the fields of science, technology, engineering and math, commonly referred to as STEM. The majority of STEM-related jobs pay wages above the national average. STEM professionals earn 30 to 35 percent more than their peers in non-STEM jobs. Despite these numbers, women, who average more than 60 percent of most public university student populations, make up only about one-third of the world’s STEM graduates; and only 24 percent of workers in STEM are women, according to a 2017 report from the U.S. Department of Commerce.

Looking at the statistics, it’s ironic that women are responsible for many of the major advances in science, technology, engineering and math. The Oscar-nominated film, “Hidden Figures” highlighted Katherine Johnson, Dorothy Vaughan and Mary Jackson, who helped NASA successfully launch and recover Friendship 7 piloted by John Glenn. MIT’s Radia Perlman, known as “The Mother of the Internet,” worked on the algorithms that make today’s internet possible.

Rear Admiral Grace Hopper helped pave the way to the development of COBOL, the first programming language to use English words. Hopper also invented the first compiler, which translated written language into computer code. Florence Seibert, biochemist, developed a system to purify a protein found in the TB bacteria; the system became the standard for TB testing. Emmy Noether’s groundbreaking work in mathematics led Albert Einstein to call her “the most significant creative mathematical genius thus far produced since the higher education of women began.” Noether’s work formed the basis for Einstein’s Theory of Relativity.

These individuals represent many women who have faced unfair barriers throughout their professions. Noether, for instance, was only allowed to audit university courses. When she wanted to teach classes, she was listed only as assisting a male lecturer. Still, they persisted and forged a path for today’s women to enter STEM fields.

We can do better. A recent study published by the National Bureau of Economic Research explains a number of factors that play into women choosing non-STEM careers. In middle school and high school, girls pick up on the message that boys are better at STEM subjects. During these formative years, girls need mentors and role models who can help them pursue STEM careers.

At the University of West Florida, the faculty from the Hal Marcus College of Science and Engineering have launched several STEM outreach programs in local schools and community groups that give girls hands-on experience. Dr. Brian Eddy, computer science, and his wife, Adrienne Eddy, developed Code and Tech Stars, a program that works with fourth through sixth-grade girls. CaTS teaches coding fundamentals including creating websites, developing games and working with robots.

Our STEM faculty members offer advice for parents who want to encourage their daughters’ interest in STEM fields. The stereotype that boys are better than girls at science and math needs to be actively challenged.

“The view that girls aren’t as good as boys at these subjects hasn’t been shown in research,” Dr. Eddy said. “We need to stop feeding this stereotype.”

Dr. Erica Taylor, biology instructor, director of STEM Living Learning Community and director of the NSF S-STEM program said that we need to teach girls not to let others discourage their interests while showing them that there aren’t any limits to their abilities. Dr. Karen Molek, associate dean of the Hal Marcus College of Science and Engineering and chair of the Department of Chemistry, added that parents should expose their daughters to science, help them develop confidence in their abilities and take risks.

UWF offers all STEM majors several programs designed to provide them with the support needed throughout their college experience. Many of the programs are designed specifically to reduce barriers for women in STEM. The fourth and fifth floors of the Presidents Hall are devoted to STEM majors in a living-learning community, STEM LLC. Students get to know faculty mentors, participate in weekly educational programs and take advantage of specialized tutoring sessions. Women STEM majors also can join professional societies including the Women in Science organization, Association of Computing Machinery–Women, and the Society of Women Engineers. These groups give students hands-on opportunities to network, participate in educational programs and enjoy community outreach initiatives.

We also offer nine degree-specific scholars programs that give students hands-on learning experiences outside of the classroom. The students learn about summer research opportunities, receive career advice and participate in peer-to-peer and faculty mentoring.

By working together, parents and teachers can show today’s girls that when it comes to science, technology, engineering and math, there are no limits to what they can achieve. Each of them has the potential to become the next Katherine Johnson, Rear Admiral Grace Hopper or Florence Siebert who can make groundbreaking advances in our understanding of the world.

Most read in President's Blog