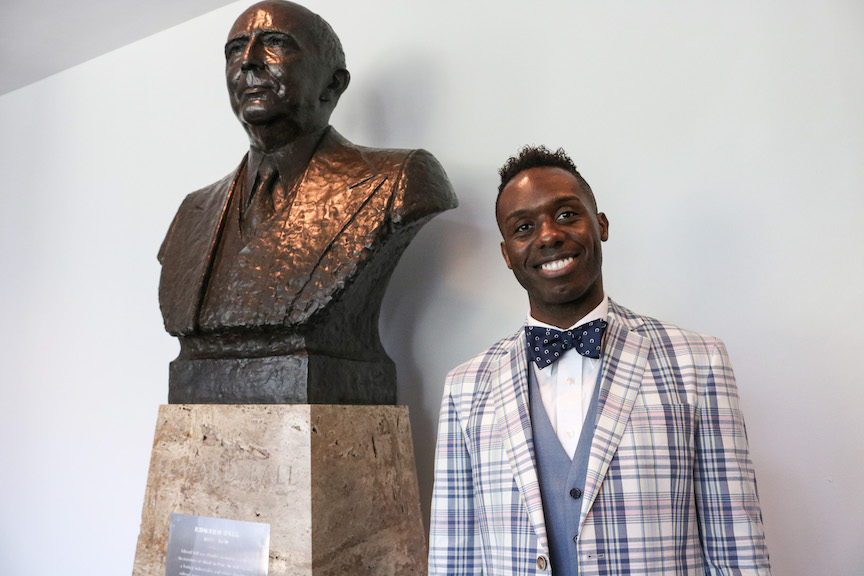 Black, a senior majoring in vocal performance, competed in the Grady-Rayam competition in February in Lakeland, Florida. The annual competition challenges vocalists to learn and perform arranged spirituals before a jury panel. Black performed “I Couldn’t Hear Nobody Pray,” an original composition by Dr. Robert Williams, as well as “Were You There?” by Moses Hogan.

Black was named the male winner for the upper division, receiving a cash award from the Negro Spiritual Scholarship Foundation and recital performance opportunities. His debut performance took place in March at the Project Grady-Rayam 2017 World Premiere Gala in Orlando, Florida.

“It means a lot to be the first Grady-Rayam Prize winner from UWF,” said Black, who competed against performers from other Florida colleges. “As the male winner in the upper division, I will serve as an ambassador for the Negro spiritual, also known as the American spiritual, and will perform throughout the United States over the next year.”

According to the Library of Congress, a spiritual is a type of religious folksong that is closely associated with the enslavement of African people in the American South. The number of songs increased in the last few decades of the 18th century and became a distinct musical genre before the abolishment of legalized slavery in the 1860s. The African American spiritual constitutes one of the largest and most significant forms of American folksong.

“Not all spirituals are praise songs,” Black said. “They tell stories.”

Faculty in the UWF College of Arts, Social Sciences and Humanities selected Black as the 2017 recipient of the Student Arts Advocacy Award at UWF, an honor that recognizes students who bring attention to the essential role of the arts in Florida’s quality of life. He formally received the award on March 22 at a presentation by the Florida Higher Education Arts Network during Arts Advocacy Day at the Florida State Capitol in Tallahassee.

“Donovan Black is an exemplary student,” said Dr. Sheila Dunn, chair of the UWF Department of Music. “He is a powerful performer with tremendous vocal talent and a gift for arts advocacy.  He is very deserving of these recent honors.”

As a participant in Arts Advocacy Day, Black joined students, educators and other stakeholders throughout the state in discussing the value of the arts with state leaders. He visited the office of Rep. Frank White, R-Pensacola, where he sang “Summertime.” He also met Lois Benson, chair of the Florida ​Council on Arts and Culture.

“Attending Arts Advocacy Day was an amazing experience. I learned more about how bills are passed and how funding comes about,” Black said. “In order to have funding for the arts, we have to be visible and demonstrate our value in education and the community.”

In addition to his coursework, Black volunteers at Dixon School of the Arts in Pensacola, where he teaches voice and music theory as part of a Saturday program for students.

The UWF Department of Music, accredited by the National Association of Schools of Music, provides students with a high quality, personalized, undergraduate education for careers in the fields of music performance and music education. Admittance to the programs is by audition only. For more information, visit uwf.edu/music.