Thomas Asmuth, art professor at the University of West Florida, will present a lecture on methods of cross-pollinating the disciplines of science, technology and art, while investigating the historical and contemporary progress and pitfalls of this creative form on Thursday, Feb. 26 at 5:30 p.m. The event will be held at the Pensacola Museum of Commerce, located at 201 East Zaragoza St. in downtown Pensacola. 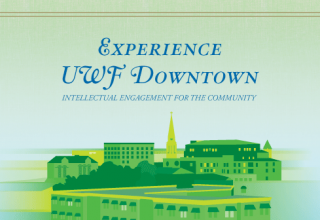 Asmuth’s lecture, titled “Art as an Exo-Discipline,” is part of the Experience UWF Downtown lecture series. The event is free and open to the public.

With an eclectic personal history, Asmuth’s experience is a blueprint of the wide-ranging practices in his portfolio. While a physics student at Purdue University in the late 80’s, he discovered a deep interest in art, which in turn, was the impetus for travels throughout the western United States. From 1989 to 2009, Asmuth resided in the several small cities in central California and the Sierras, Los Angeles, Humboldt County and Oakland. Over this 20 year chapter, he also engaged a series of careers including work in sales, as a baker, a student of religion, as well as painting and art, and in the late 1990’s he renovated a historic Craftsman Bungalow in Pasadena.

With a zeal for defying labels and complicating disciplines as a method, Asmuth was encouraged by a physicist friend to re-incorporate scientific and technological media into his art in 2003. He built a series of meditative chambers centered around homemade particle physics instruments which unveiled subatomic processes like cosmic rays, Muon decays and Alpha particles for the viewer. Since this time, he has employed many different technologies and disciplinary areas as a vehicle for artistic production and experiential installations. Asmuth’s research topics and interests include autonomous robotics, systems controls, ‘Space Race’ imaging, performance in alternative spaces, invisible spectra, voxel aesthetics and wearable computing.

His works and collaborations have been exhibited in the United States and internationally at the Natalie and James Thompson Art Gallery, SECAC2014, Brick City Gallery, 319 Scholes, turbulence.org, the 17th International Symposium on Electronic Art, the Laguna Art Museum, 2006 Zer01 Biennial, Salisbury University and the Francis Tang Teaching Museum.

Currently, Asmuth serves as an assistant professor in the UWF Department of Art, where he instructs courses in mechatronics, physical computing and experimental media while utilizing science and technology as a method and media to explore culture, aesthetics, social practices and performance.

Asmuth earned a bachelor’s degree in painting from the San Francisco Art Institute and a master’s degree in new media from San José State.

Experience UWF Downtown is a four-part lecture series that promotes the value of the liberal arts in contemporary life. It showcases outstanding teacher scholars who serve the community as UWF faculty, as well as scholars of national prominence who amply illustrate the essential role of the liberal arts in building and sustaining contemporary culture.