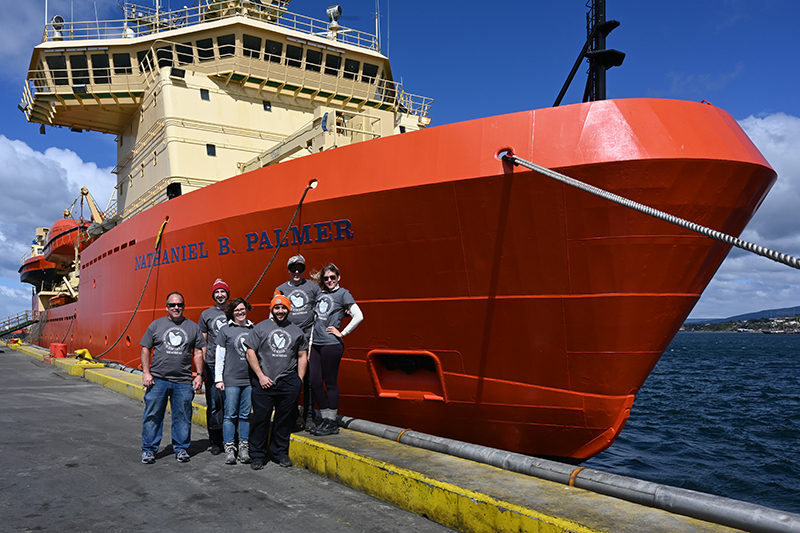 Learning how phytoplankton gather energy and contribute to the ocean’s ecology is at the forefront of research for many biologists and oceanographers. Phytoplankton are microscopic marine algae that are buoyant and float in the upper part of the ocean, where sunlight penetrates the water. This fall, Jeffrey is spending 45 days traveling along the Antarctic peninsula for his 13th research trip, which is sponsored by the National Science Foundation and is in collaboration with the Woods Hole Oceanographic Institute. Jeffrey and a team of six researchers, including UWF graduate assistant Leila Harris, are studying phytoplankton, gathering data that determines the organism’s role in what’s known as the microbial loop, or the marine microorganism food web.

“Most people think in terms of gathering energy as plants that use photosynthesis and they think of animals that eat, but these particular groups of phytoplankton, known as mixotrophs, can actually do both,” said Jeffrey, who teaches biology and is the director of the Center for Environmental Diagnostics & Bioremediation and director of Reubin O’D. Askew Institute of Multidisciplinary Studies. “Presumably they make most of their living as plants using photosynthesis, but on occasion under certain conditions they can also eat bacteria.”

Known as mixotrophy, this is broadly defined as the combined use of photosynthetic and heterotrophic nutrition within a single organism, according to the National Academy of Sciences.

This trip will build upon Jeffrey’s previous research gathered last April, during the region’s fall and winter seasons. Returning during this time of year, which is the region’s spring and summer, allows the researchers to see how the phytoplankton gather energy during different seasons. Jeffrey says that while researchers have recognized the existence of these organisms in the oceans for some time, little is known about their role within the microbial loop.

Jeffrey and Harris are measuring the growth rates of both the bacteria and phytoplankton from each area where they gather samples, while the other researchers measure grazing rates of  phytoplankton when they’re fed bacteria. They are looking into high-level microbiology, identifying these organisms using DNA-sequencing. They hope to uncover something unique and interesting about the role these organisms play in the role of the ecology of the ocean while advancing this field of research using new techniques and technologies.

“It never crossed my mind that I could travel to the Antarctic and look at interactions among organisms in an extreme environment where not a lot of people have had the opportunity to travel,” Harris said. “I’ve spent a lot of time working with samples from the previous trip, and now I’ll be on the other side—gathering samples, studying growth rates and analyzing what we collect.”

For Jeffrey, who first visited the Antarctic in 1981 as a field technician, returning to the region maintains the allure.

“It’s always fascinatingly beautiful,” Jeffrey said. “You never know what you’re going to see—no two icebergs are the same, no two penguins act the same. The possibility of seeing whales is exciting, of course, but it’s pristine splendor is amazingly beautiful. There’s nowhere I’ve traveled as untouched by human activity as the Antarctic.”

Jeffrey is an oceanographer focusing on bacterial function and diversity in the ocean. He studies the effects of ultraviolet radiation on marine microbes and has worked around the globe, from the Atacama Desert in Chile to the southern oceans in Antarctica. He has also been involved with projects examining the effects of oil on microbial communities in the Gulf of Mexico, spawned by the 2010 BP oil spill.

To learn more about the UWF Department of Biology, visit uwf.edu/biology.

For more information about the Hal Marcus College of Science and Engineering, visit uwf.edu/hmcse.