The University of West Florida’s Brett Berg has been named the National Association of Athletic Development Directors 2021 College Fund Raiser of the Year. The recognition was announced on Thursday, Feb. 18, 2021. 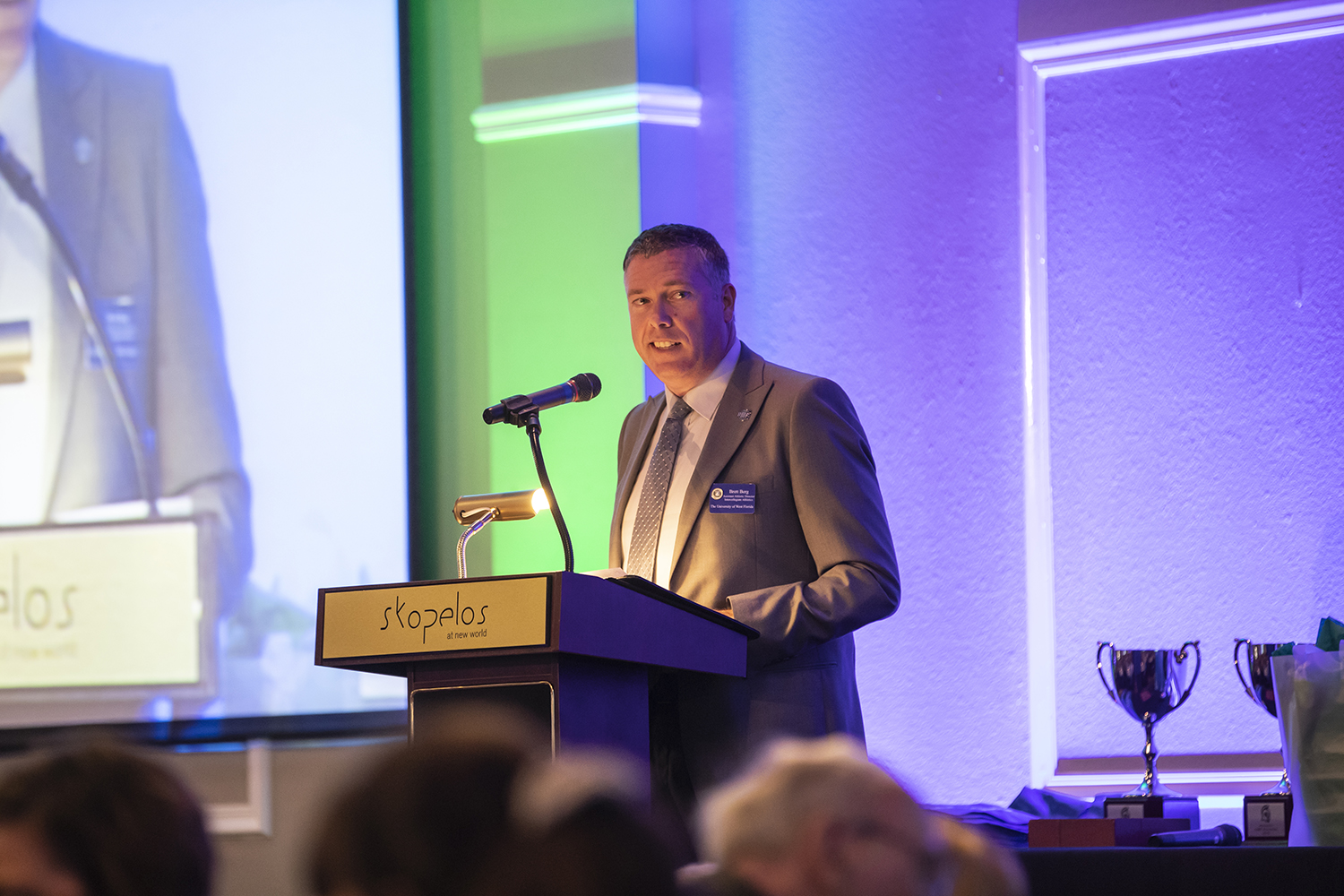 “I am humbled and thankful for this award,” said Berg, assistant vice president for development and associate athletic director at UWF. “I take pride in the idea that this award is a wonderful achievement for the University of West Florida and is a product of our hard working staff, amazing coaches, student-athletes and generous donors. I am truly thankful to be a part of an exceptional team and university.”

Berg has a long and varied history with UWF, where he now serves on the leadership teams for both University Advancement and Intercollegiate Athletics. His career stints include athletics, health care, journalism, tourism and museums.

“This is a very well-deserved recognition for Brett personally and a great honor for UWF on the national stage,” said Howard J. Reddy, UWF vice president for University Advancement.

Berg oversees all fundraising activities for the UWF athletics program and manages football game day development operations. He and his team have set fundraising records each year, in addition to securing 21 of the top 25 largest gifts in the history of UWF Athletics, which includes the first ever six and seven-figure gifts for athletics. Berg has added 22 endowed funds and scholarships for athletics. Throughout his tenure at UWF, Berg has resurrected the Argonaut Athletic Club and set up a comprehensive fundraising program.

“Brett has done a great job of growing the Argonaut Athletic Club and building relationships with our donors, while connecting them to our coaches and student-athletes,” said Dave Scott, UWF director of athletics.

Berg has solicited some of the largest gifts for UWF Athletics, completed the UWF Football Founders initiative, created a new major gift society and has led the donor and fan initiatives around the UWF football team’s 2019 NCAA Division II national championship run. Under Berg’s leadership, UWF created the Football Founders initiative to help start a football program. That initiative raised more than $5,500,000 and laid the foundation for a new program that advanced to the national championship game twice in its first four years of existence. The largest gift ever to UWF Athletics was naming the Darrell Gooden Center, which Berg cultivated and solicited. This was one of the first buildings on campus to be named directly from a donor gift and the facility also includes seven other donor-named spaces and funding for all 115 lockers in the new football locker room.

Prior to UWF, Berg worked as director of marketing and public relations at the Gulf Coast Exploreum Science Center and IMAX Theater in Mobile. He also previously worked in Pensacola as the assistant director of the Baptist Health Care Foundation, where he oversaw fundraising initiatives that helped renovate the women’s center, generated funds and recognition for labor and delivery, built a new cancer center and conducted a nationally recognized employee giving program.

Berg has also served as the director of Baptist SportsCare, overseeing all marketing to physically active groups for Baptist Health Care and worked for the Pensacola News Journal for more than 10 years, serving as a correspondent and writing articles on high school and collegiate sports.