The University of West Florida celebrated President Judith Bense today with an End Zone Celebration in the Field House. Students, faculty and staff gathered to say farewell and listen to Bense as she reflected on her eight-year presidency before she steps down on Dec. 31, 2016. 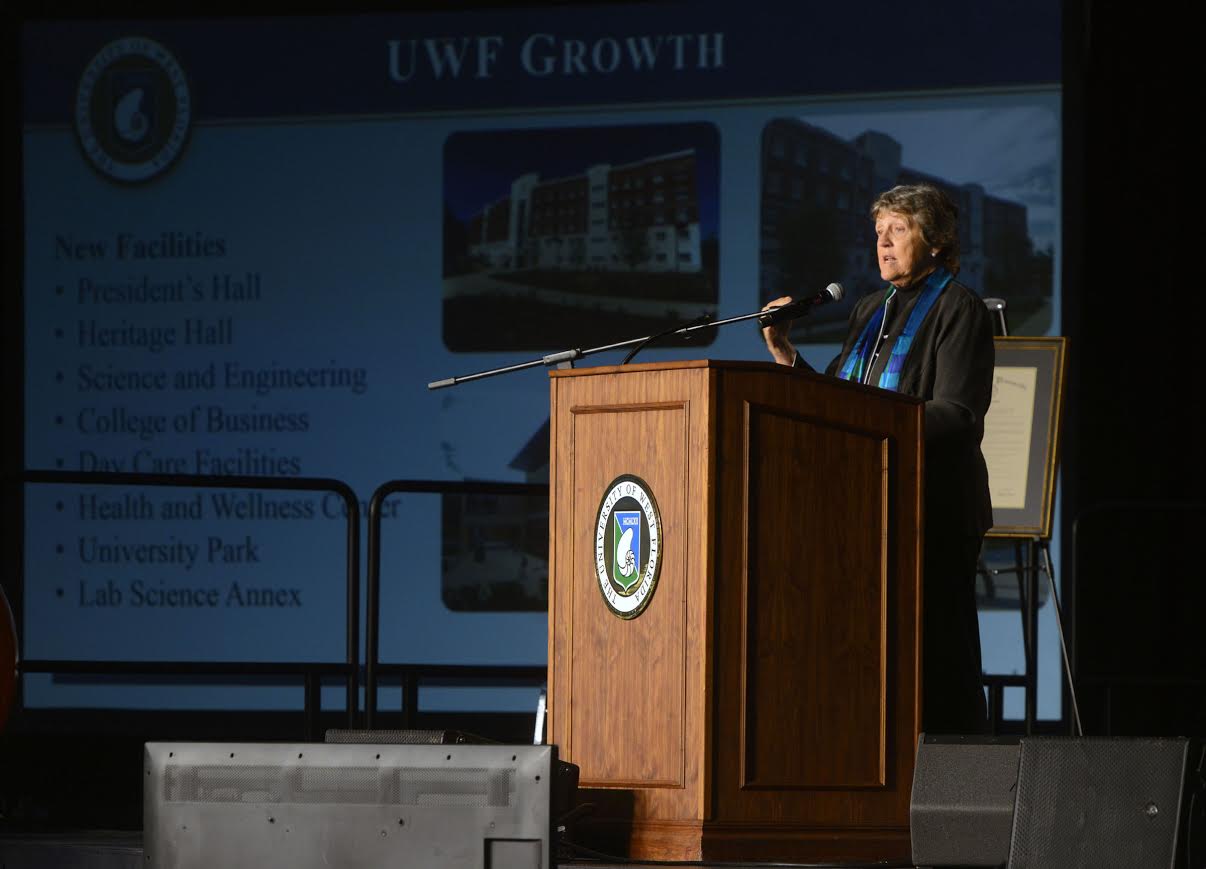 The University of West Florida celebrated President Judith Bense today with an End Zone Celebration in the Field House. Students, faculty and staff gathered to say farewell and listen to Bense as she reflected on her eight-year presidency before she steps down on Dec. 31, 2016.

“These last eight years have been exciting and exhausting,” Bense said. “I have had the opportunity to know and work with so many outstanding people. I have met so many great people in our community. The past eight years have surely been the best of times for me.”

In her address, Bense noted her initial goals as UWF president: to put UWF on a trajectory of growth in size and scope; to increase partnerships in the community; and to develop connections throughout Northwest Florida, the Legislature and the state. But her most important goal, she said, was ensuring the University prepared students for the future.

“Our students are the soul of this University,” she said. “Everything we do is for them— preparing them for the world ahead and making sure they have the tools and skills to make a positive impact in their communities and beyond. Teaching students in the classroom is not and should not be the only way we prepare our students. Student life is just as crucial to our young men and women as they approach graduation and set out to make waves in the world.”

Bense highlighted the University’s growth since 2008 in several areas, including enrollment, facilities, academic and community programs and more, as well as notable legislative, fundraising, faculty, staff, student and athletic accomplishments.

The University achieved a stabilized enrollment growth rate of 3.4 percent in the years following the 2008 recession, and as of Fall 2016, reached a record high enrollment of more than 13,000 students.

“It has been amazing to see, not just the amount and size, but the quality of the new facilities that we built,” Bense said. “These buildings had an immediate impact on our students, faculty and staff and will continue to move UWF forward as we begin our path toward emerging preeminence.”

Beyond building a physical presence downtown, Bense also credited the UWF Division of Anthropology and Archaeology with serving as a leader in “literally digging up Pensacola history.” She highlighted the recent identification of the location for the Luna settlement, the Spanish colony that was the first multi-year European settlement in the U.S.

The University has experienced significant academic growth since 2008, including 12 new programs, such as the Bachelor of Science in Supply Chain Logistics Management, Doctor of Physical Therapy, Master of Social Work, and Bachelor of Science in Mechanical Engineering. She also emphasized the consistent growth of UWF on the Emerald Coast, with eight programs fully based at the Fort Walton Beach location, expanded space in the Joint Use Center and a new engineering lab as evidence of its success.

Bense said UWF has become the state leader in online education since 2008. She touched on the Innovation Institute’s responsibilities in operating the Complete Florida program as well as the Florida Virtual Campus, which has a budget of more than $23 million and more than 100 employees.

Under her leadership, the University has seen success in the Florida State Legislature, including an increase in state funding from $67 million in 2008 to more than $109 million in 2015 and more than $91 million for new facilities alone.

Since 2008, UWF’s annual giving increased almost 300 percent—from $2.8 million to more than $11 million—while its endowment increased from $47.4 million to $60.1 million. The University has received several large gifts in recent years, including $5 million for the first named college, the Hal Marcus College of Science and Engineering.

“We have had two football games downtown, and the reception our team received has been nothing short of exhilarating,” Bense said. “I can assure you, with just a few games played, the Argonaut football team has placed the rest of the conference on notice. They know that, very soon, we will be a force to reckon with on the gridiron.”

After December, Bense will take a yearlong sabbatical before returning to UWF as a faculty member. Dr. Martha Saunders, UWF provost and executive vice president, will become the sixth president of UWF effective Jan. 1, 2017.

As part of her address, Bense recognized several faculty and staff members who have contributed to the University’s success since 2008.

“As I pass the torch to soon-to-be President Martha Saunders, I want everyone to know that none of what UWF has accomplished could have been done without each and every one of our faculty and staff,” Bense said. “The blood, sweat and tears they put into making this University a premier place for our students to learn, grow and achieve has not gone unnoticed.”

“I want to leave one piece of advice. Life is a series of chances. The more you take, the more successful you will be. You may fail from time to time, but you will never reach that next level without taking a chance. Keep the momentum going. With Martha Saunders as your next leader, you will get to the next level.”