Hunter Lyons is building an impressive resume as a student leader at the University of West Florida and positioning himself for a bright future—which didn’t seem remotely possible during his turbulent childhood. 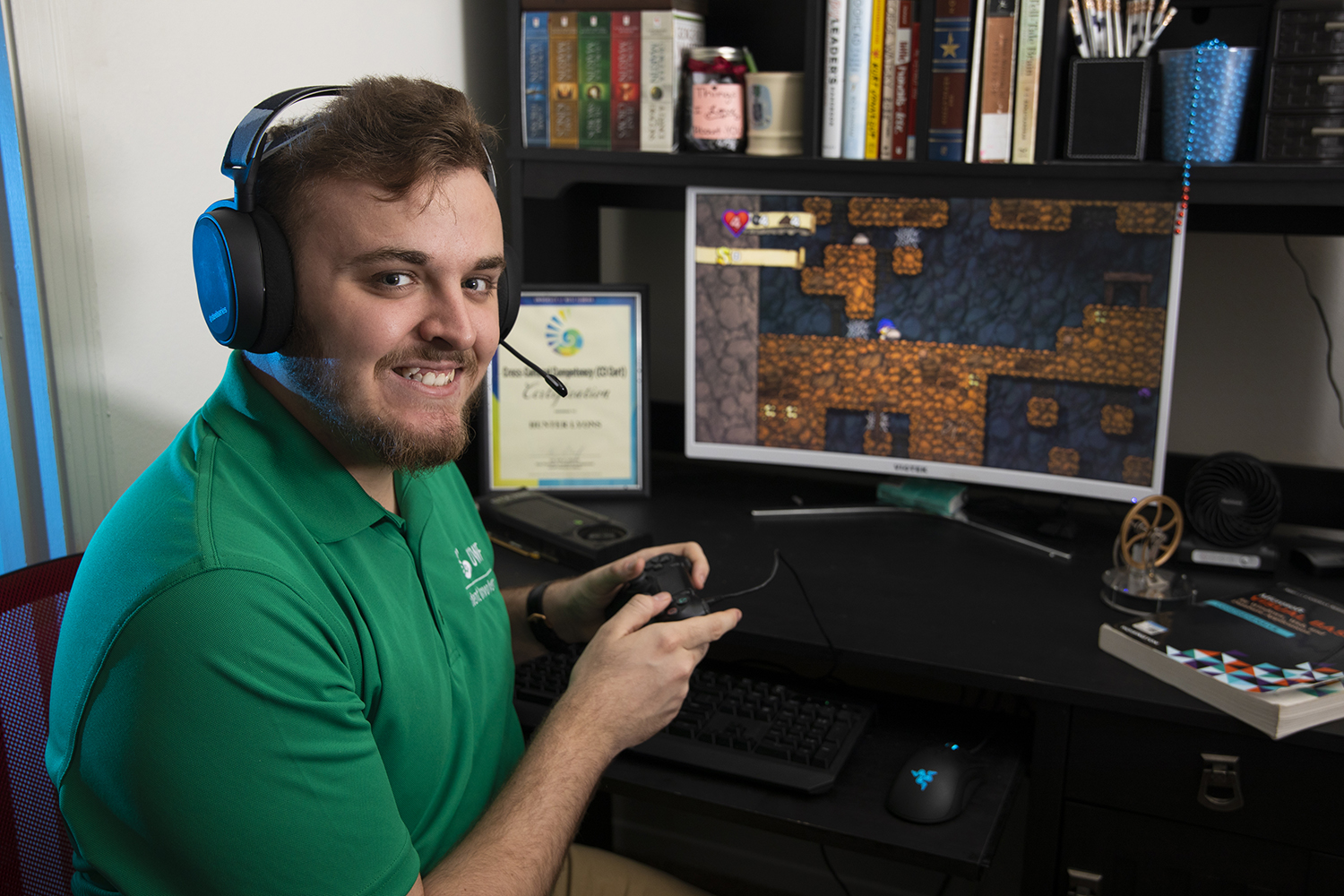 The 2017 Pine Forest High School graduate spent much of his youth in the foster care system, lacking the typical, central support system many of his peers had at home. Aside from his final placement, where he says he finally felt like part of a family, he often spent his nights sleeping on air mattresses with only his most basic needs met.

“Most placements felt almost like human factories,” the 20-year-old Lyons said. “I remember one time, my then guardian told me I could not go to a Latin competition conference for school because we were broke, but she had just bought her biological daughter a car. It was often very clear how different and outside I was in these placements, but Ms. Blake, who was my final placement, made me feel like part of the family.”

During the tough times, Lyons found solace in video games. For him, it was an opportunity to form real friendships in online communities. His passion for gaming continued, and when he came to UWF, he founded Argo Gaming Club. What began as Lyons and a few friends has quickly grown into one of the most popular clubs at UWF with more than 300 registered members.

“I love to talk about my past because I have the chance to tell others who might be struggling ‘you’ve got this,’” said Lyons, a member of the Kugelman Honors Program whose student leadership roles include director of internal affairs for the Student Government Association and vice president of recruitment for University Student Ambassadors. “I had a terrible home life, but video games were often my escape. I could get online and transform into a knight or the CEO of a company. The real friendships and communities I’ve built through online gaming showed me that I could build a similar, inclusive community at UWF.”

As president of Argo Gaming Club, Lyons has created a community that accepts and embraces diverse games, allowing members to find their niche. Currently, there are 10 sub-clubs, which gives members an opportunity to serve in a leadership role while enjoying what interests them.

Gabby Ruiz, a senior communication arts major and avid member of Argo Gaming Club, said many club members never had a stable friendship prior to joining and meeting other students who share their hobby.

“Many gaming clubs at other universities focus more on the competitive aspect of gaming, not the social and general fun parts of simply playing Monopoly or Dungeons and Dragons with a group of friends,” Ruiz said. “Whether it’s competing against others in a match of Super Smash Bros. or laughing together during a game of Town of Salem, we have a place for anyone who wants to play their favorite game. That’s been Hunter’s goal for the club from the beginning—to foster a healthy environment where people can come together and enjoy playing games.”

In addition to seeking a university where his impact could be felt by many, Lyons considered what the best financial option would be for his situation. As a recipient of the University of West Florida’s Argo 30 Guarantee, which began in Fall 2019 and covers tuition and mandatory fees for low-income students, he is on track to graduate in Spring 2021 with a degree in information technology completely debt-free.

“I’m able to focus on growth and learning what I want to do without worrying about the financial burdens that can come with attending college,” Lyons said.

Looking ahead, Lyons plans to pursue a master’s degree at UWF and work in higher education; with the hope of being able to educate his “foster brothers and sisters” about the resources available.

“There were a number of pivotal points in my life, and many of the people who got me where I am are educators,” Lyons said. “I might be on a very different path had these individuals, many of whom are at UWF, not helped me. I’d like to have the chance to be that person for someone else.”