The Experience UWF Downtown 2015-16 Lecture Series continues with its second installment on Feb. 11, 2016. Dr. Wes Jamison will present his lecture, “Food Fight! Pink Slime and the Passionate Politics of Food,” at the Museum of Commerce on 201 E. Zarragossa St. in downtown Pensacola. The series is free and open to the public, with a reception at 5:30 p.m. and the lecture at 6 p.m. 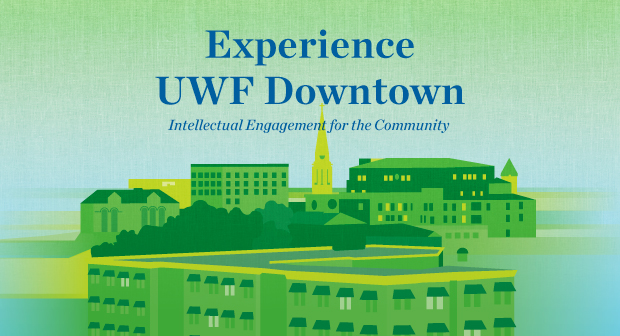 Jamison, a professor at Palm Beach Atlantic University, teaches public relations, persuasion, political communication and advertising, and mass media. Jamison’s scholarship focuses on persuasive messages and agriculture, often integrating the two. His published works include research on public perceptions of agriculture and biotechnology and responses to persuasive messages, and his current work focuses on ways in which U.S. society views the meat industry and the sources of conflict that meat production and consumption engender.

He serves as a member of the Board of Trustees for the Institute for Feed Education and Research and as a director for the Public Relations Society of America’s Palm Beach Chapter. Previously, he served on the Governor of Iowa’s Biotechnology Taskforce, the Board of Directors of the Leopold Center of Sustainable Agriculture at Iowa State University, and the faculty for the University of Arkansas and Worcester Polytechnic Institute, the University of Florida and the Swiss Federal Institute of Technology in Zurich. His private sector career has included work in agriculture, including the management of accounts such as Publix Supermarkets.

Jamison received a Bachelor of Science in poultry science from Auburn University and is currently working toward a second Ph.D. in public relations from the University of Florida, after receiving the first doctorate from Oregon State University in agricultural politics. His studies evaluate persuasive messages, consumer reactions to risk, and the effects of cognitive dissonance on consumer behavior. At Oregon State, he studied the animal welfare and rights movements as models of persuasion and consumer attitudes and behavior, and consumer perceptions and attitudes toward agriculture and food.

Jamison is one of five speakers featured in the four-part Experience UWF Downtown Lecture Series. The series promotes the value of liberal arts in contemporary life by showcasing outstanding teacher scholars who serve the community as UWF faculty, as well as scholars of national prominence who illustrate the essential role of the liberal arts in building and sustaining contemporary culture.

The next lecture, “Radicalism, ISIS and National Security,” will take place on March 31, 2016, featuring UWF’s very own Drs. Michelle Williams and Jacob Shively. The final lecture in the 2015-16 series will feature Eric Whitacre on April 21, 2016. For more information, visit the Experience UWF Downtown Lecture Series website.