Since women began entering the workforce in large numbers, a gap has existed between the wages women earn and the wages men earn. According to data compiled by the U.S. Bureau of Labor Statistics, women’s earnings have consistently lagged behind those of men and, in 2015, remained at only 81 percent of men’s earnings. 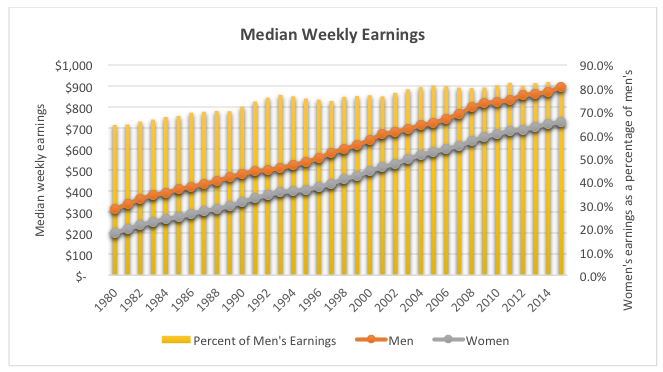 Wage data from the U.S. Census Bureau for year-round, full-time employment also reflects this reality for the Pensacola Metropolitan Statistical Area. The American Community Survey five-year estimates for 2014 document a median wage for males of $45,625 in Pensacola and $33,577 for females. As the table below illustrates, the gender gap in wages holds true even when differences in education levels and industries are taken into account. 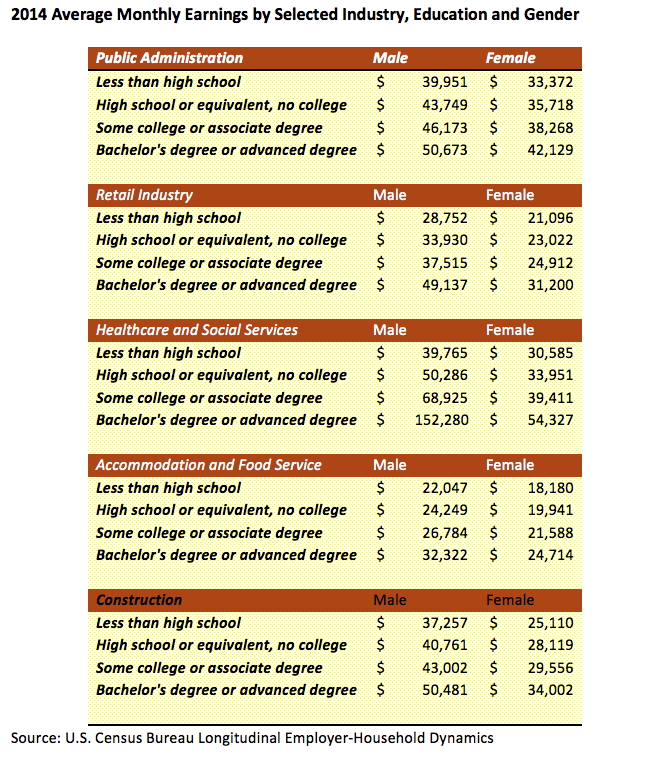 While the wage gap itself is well-documented, the severity of the gap and the factors that cause and contribute to it are still debated. Many researchers have looked at the issues and have come to a variety of conclusions.

Initially, it should be noted that discussion of this issue generally focuses on gender differences in earnings and not differences in wages paid for the same work. Both the Equal Pay Act of 1963 and Title VII of the Civil Rights Act of 1964 guarantee that men and women who perform the same job will receive the same wage from an employer. Instead, analysts looking at this issue focus on the fact that despite the outlawing of varying pay scales for the same job based on gender, women’s overall earnings continue to be less than men.

In 2011, the United States General Accounting Office re-examined the issue of women’s earnings and concluded that while women have made progress in earning higher wages over the last three decades, they remain overrepresented among workers who earn low wages. In an earlier 2003 study, the GAO proposed that much of the disparity in male and female wages could be explained by work patterns. That study found that women have fewer years of work experience, work fewer hours per year, are less likely to work a full-time schedule and leave the labor force for longer periods of time than men. Other factors found to account for earnings differences included industry, occupation, race, marital status and job tenure.

Yet, the study noted that even after accounting for key factors that affect earnings, it could not explain all of the difference in earnings between men and women. This failure was attributed to inherent limitations in the survey data and in statistical analysis. Thus, no conclusions were drawn as to whether the remaining difference was due to discrimination or other factors that may affect earnings, such as women trading off career advancement or higher earnings for a job that offers flexibility to manage work and family responsibilities.

Other studies attribute the wage difference to occupational self-selection and lifestyle choices that women make that cause them to seek out employment that permits more flexibility in arranging their child-bearing and home lives or limit themselves to part-time work. An April 2015 Issue Brief from the President’s Council of Economic Advisors entitled “Gender Pay Gap: Recent Trends and Explanations” reiterates all of the same possible causes that have been examined in the past, but looks more closely at the issue of discrimination as a component, noting that “(i)t can influence what women choose to study in school, the industry or occupation that they choose to work in, the likelihood of a promotion or a raise, and even the chances that they stay working in their chosen profession.”

No researcher claims to have a single answer for what is obviously a complex issue. Some offer suggestions for fixing the problem such as comparable worth policies that would force employers to pay equally for work that is judged by skill, effort, responsibility, working conditions, etc. to be equivalent within the company. But such a change in the way business is done may seem a bit extreme until such time as someone can determine whether the wage gap is a problem that needs solving or just a statistical reflection of acknowledged gender differences.