Matt Foresman began making jerky in 2014, giving samples to his friends and co-workers. People liked his product, but the U.S. Air Force veteran wasn’t sure how to transform his hobby into a viable business venture. 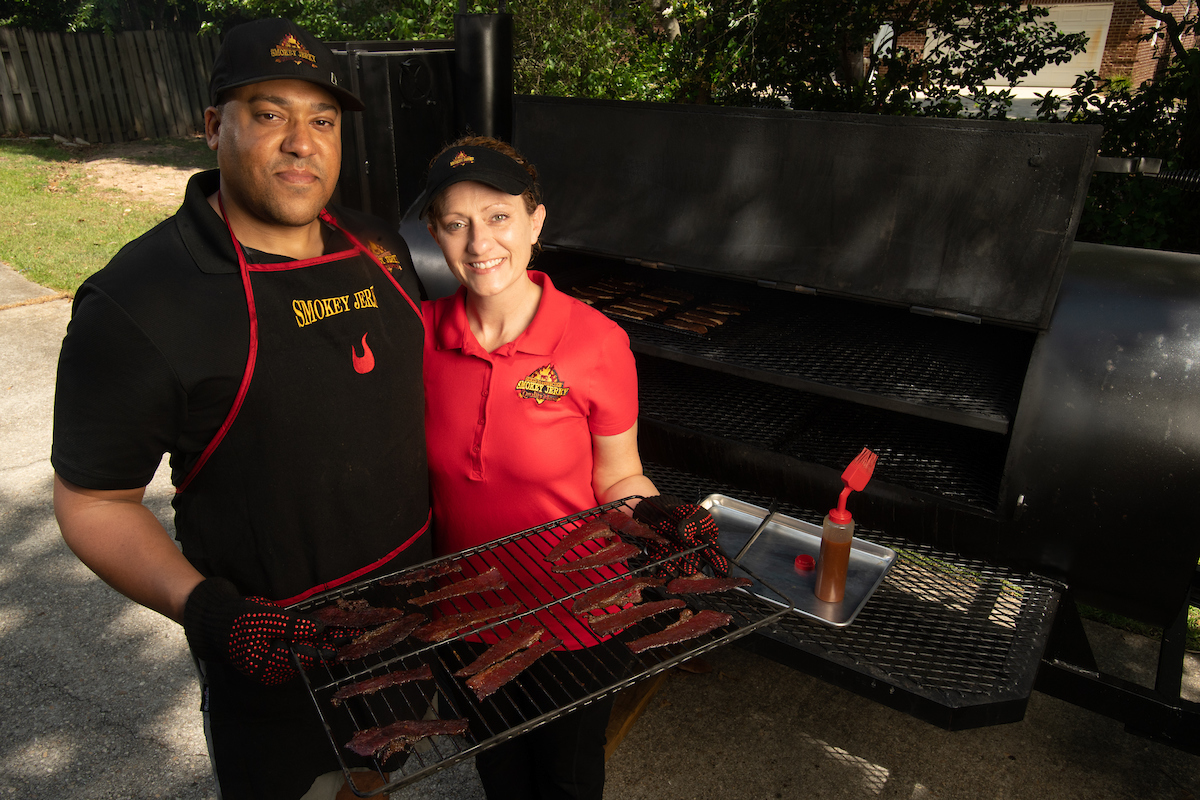 After making the move from North Carolina to Navarre, Foresman was accepted into the Veterans Florida Entrepreneurship Program at the University of West Florida in September 2018, offered by Veterans Florida in partnership with the UWF Military and Veterans Resource Center. The series of workshops and classes provide mentorship and guidance to military veterans interested in starting their own business.

Through the program, Foresman was first able to learn whether he had a viable product, then develop a sound marketing plan and new website for his burgeoning business, Smokey Jerky.

“I have a successful website and I’m now shipping to consumers all over the country,” Foresman said. “I credit most of that to the Veterans Florida Entrepreneurship program.”

A financial planner by day, Foresman is able to run Smokey Jerky as a full-time business with the help of his wife, Devon, who recently retired from the U.S. Air Force. The ability to grow Smokey Jerky has allowed Foresman to serve deployed military members overseas.

“I’m very proud of that,” he said. “I remember being deployed overseas and the jerky was horrible. I needed to fix that.”

The networking opportunities offered through VFEP have been especially valuable for Foresman.

“Pensacola was relatively new to me,” Foresman said. “I quickly made connections with other types of small business owners and individuals who could help me and showed a great interest in my product and getting it out to the world.”

The UWF MVRC, which launched in 2011, is dedicated to supporting military and veteran students.

“Our purpose at the UWF MVRC is to serve our military, veterans and their families in every capacity possible,” said Lori Milkeris, interim director of the MVRC and Air Force veteran. “Our partnership with Veterans Florida through the Veterans Florida Entrepreneurship Program is a prime example of our commitment to the ideal of veterans serving veterans.”

Foresman is one of 22 entrepreneurship program alumni who have opened new businesses since the UWF Military and Veterans Resource Center began offering the program two years ago. Companies benefiting from the program run the gamut from marine archaeology to those offering software applications and medical devices.

“VFEP has partnered with six network partner organizations throughout the state to deliver effective, structured training to our veterans, with UWF being one of those partners,” said Jeremy Sinnemaki, director of Veterans Florida.

Participants in the 12-week Veterans Entrepreneurship Program are taught by Robert Foster, a 40-year veteran entrepreneur who helmed the Venture Hive, a business accelerator that assists veterans in starting their own company, before he joined UWF’s MVRC team.

“I love that veterans are goal and mission-driven,” Foster said. “So, if I can help them establish the outcome they want, which is a successful idea, business venture or product that sells, then I tell them a process to get there and what the tools are. All I have to do after that is step back. They will take the tools and execute the process.”

As part of the program, Foster brings in guest speakers who speak on topics such as legal, licensing and insurance issues involved with running a successful business.

“We also take them to networking events, make them get business cards and prep them on how to work a room,” Foster said.

The Veterans Florida Entrepreneurship Program culminates with a Shark Tank-style competition where veterans pitch their business plans to a panel of judges composed of area business leaders.

Foster also brings in business mentors–many of them graduates of the program–to help guide the students.

“I am only a catalyst, a wake-up call,” Foster said. “But the mentors absolutely turn all these business ideas into realities. They deserve the credit.”

As a way to show his thanks for the guidance he received from the program, Foresman served as a mentor for the Spring semester’s cohort.

“It’s a great program and now I have the opportunity to go back and serve as a mentor for the program so that I can help others,” Foresman said. “Just a couple months ago, I was in the exact seat they were in.”