Pensacola Beach – A sun-kissed slice of beach owned by the University of West Florida can provide a perfect laboratory for students. 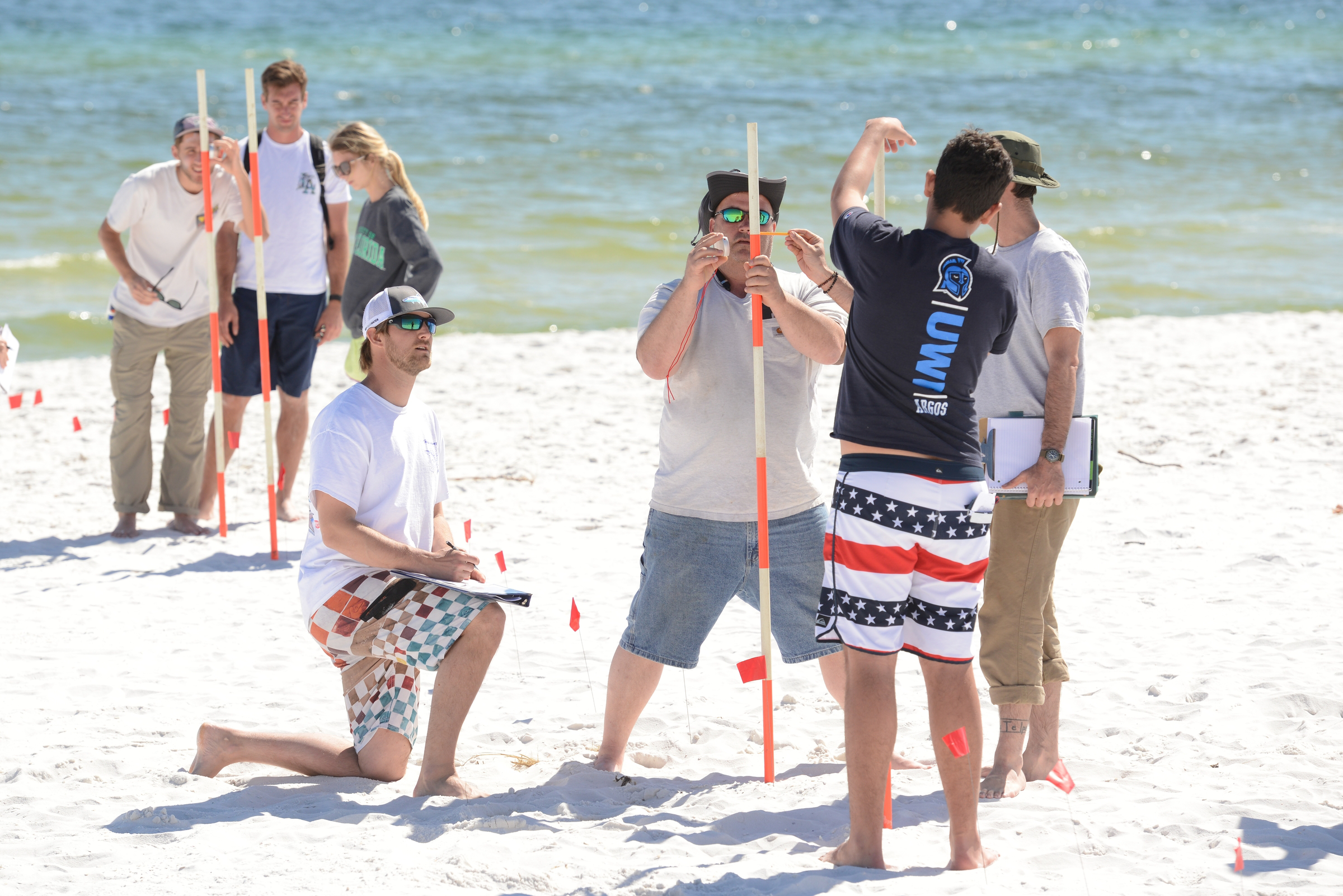 Dr. Phillip Schmutz, an assistant professor in the Department of Earth and Environmental Sciences at UWF, and students in his geomorphology class took advantage of that setting on a recent Sunday. They took a field trip and used different measurement techniques to survey the University’s beach property.

“We were conducting both dune and beach survey measurements, looking at vegetation across the dune, as well as swash zone measurements,” Schmutz said.

The swash zone is the area between the high-tide line and low-tide line, Schmutz said. Students looked at how the tide is influencing accretion and erosion of sand across the swash.

While the students conducted surveys using instruments, such as a theodolite and inclinometer to measure angles and changes in elevation, the field trip held March 6 also involved the use of a drone to map the beach area. 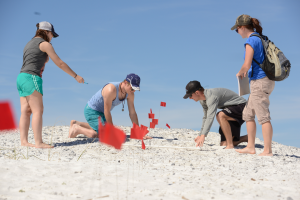 Kevin Lehman, partner in the company Remote Axcess, had contacted UWF faculty about working with them to develop his drone’s mapping applications.

“He contacted us a few months ago and asked if he could work with us to promote his business and see what research capabilities his drones have,” Schmutz said shortly before the drone began its roughly five-minute flight. “During class we regularly discuss the use of technology to study landscapes, so I invited him to the beach to fly his drone taking aerial photos so as to provide a demonstration of this technology in action for the students.”

The drone used during the field trip specializes in structural inspections, Lehman said.

“But we found out that it’s actually a much better mapping drone,” he said. “It’s got a thermal camera, so one of the things UWF is looking at is maybe sensing the different thermal signatures of the sand and seeing how that’s impacting the sea turtles.”

The drone was slated to take 48 high-resolution photographs during its flight, which would then be stitched together to create a map, Lehman said.

Schmutz said the mapping done by the drone will be used in the classroom to compare with his students’ survey measurements.

“The drone provides a way to quickly measure the area,” Schmutz said. “We can then overlay our survey measurements with the drone measurements and see how they correlate and match up.”

Peter Tereszkiewicz, a UWF graduate student who assisted in the surveying field trip, has reestablished a coastal research grid on the UWF beach property that was originally developed by Dr. James P. Morgan, a longtime UWF professor.

Tereszkiewicz said after researching graduate student papers he discovered that the grid had been established from 1978 to 1992. He then georeferenced an old map he found of the original grid to put it back together.

With the grid reestablished, between five to seven field days are scheduled a semester to allow student volunteers to help do research within the grid.

“The purpose of it is so that we could continue to redo these lines, survey them over and over again, but get (undergraduate students) involved,” Tereszkiewicz said.

Schmutz said the survey work at the beach is a way to get students excited about environmental field science and spur them to pursue undergraduate research projects that could be presented at student symposiums.