At just 26 years old, Alex Hill is putting his UWF marketing degree to use, going from the college life to the “coconut life.” Hill is currently a Junior at UWF and has launched two businesses, Emerald Coast Italian Ice and most recently, Emerald Coast Coconuts. 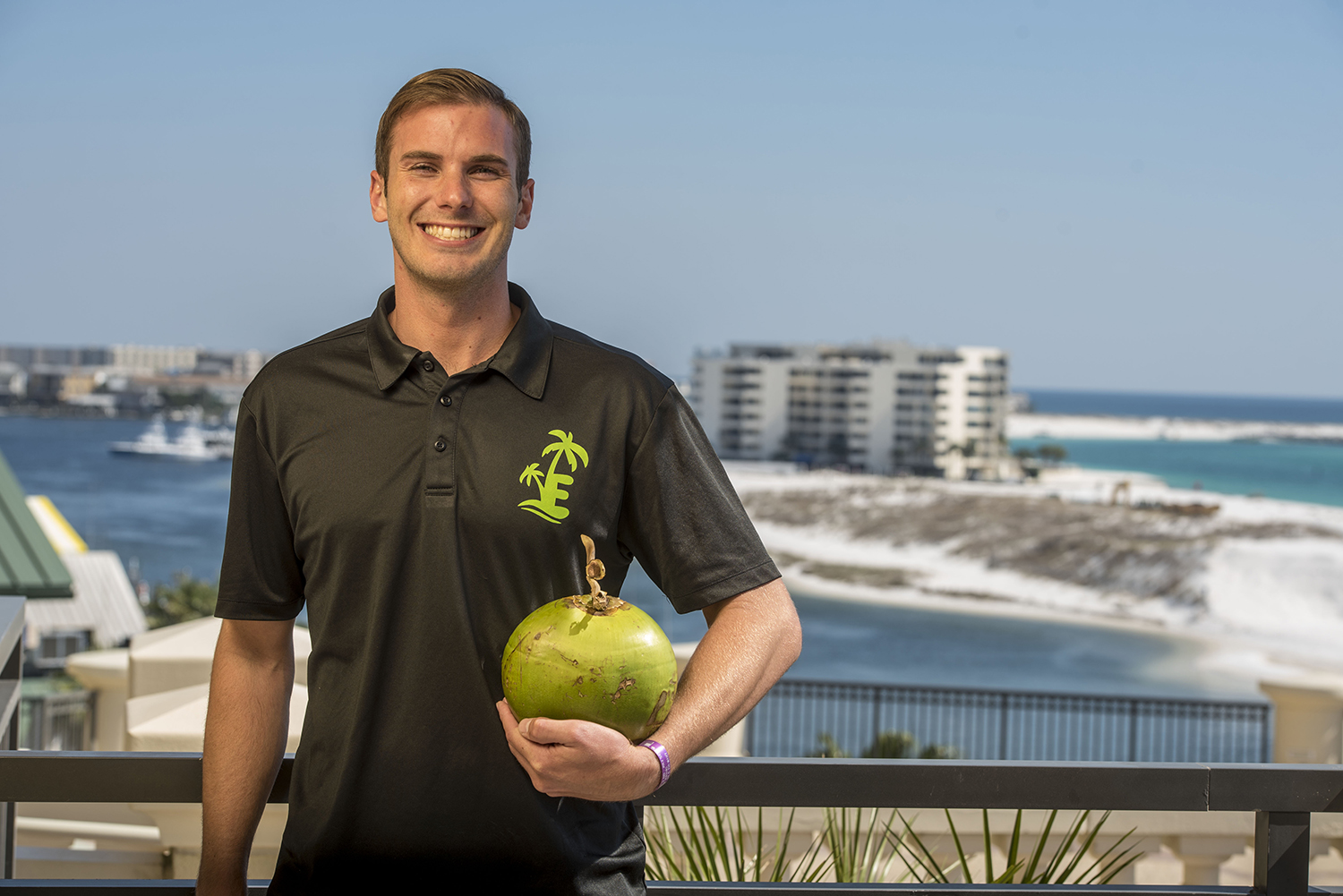 The army veteran was inspired to go into business after reading the book “Think and Grow Rich” while on deployment in Afghanistan. After serving six years in the military, he used his GI Bill to earn his associate’s degree in business at Pensacola State College before  enrolling in his marketing degree at UWF.

“The fact that marketing can make or break a product absolutely fascinated me,” Hill said. “Someone got rich selling the pet rock.”

Rather than rocks, Hill sells coconuts. Hill’s business ventures began in 2016 when he opened an Italian ice cart, attending local events such as the Pensacola Beach Airshow and Gallery Night Pensacola. In the summer of 2017, after a retreat to Key West with the Tragedy Assistance Program for Survivors serving the family members of fallen soldiers, Hill added a new product.

While watching a vendor in the Florida Keys sell snow cones and coconuts, Hill realized the coconuts were the top seller. When he asked the man where he got his inventory, he was told to “look up.” He later learned that Florida is the only state in the continental U.S. to grow coconuts.

Hill partnered with growers in South Florida and tested the product on the Gulf Coast. He sold 1,200 coconuts  in the first month after he  landed a spot at the popular HarborWalk Village on Destin Harbor.

While the flavor is fresh and the health benefits are numerous, Hill said it’s the experience that means the most. The mission of Emerald Coast Coconuts is to create a memorable experience while encouraging a healthy lifestyle, according to Hill.

“I tell my employees we’re not selling coconuts, we’re selling the ‘vacation state of mind,’” Hill said. “We call it ‘the coconut life,’ being positive and happy. Even after you get home, and you’re stuck sitting in traffic, you can go back to that experience in your mind of sipping a coconut on the beach.”

Hill said the networking at UWF has been phenomenal and is playing a huge role in his success. “The Center for Entrepreneurship has been an invaluable asset in our continued growth. The abundance of local resources and those willing to offer guidance has been overwhelming,” said Alex. “I have found several mentors and formed partnerships by attending local area events presented by Studer Community Institute.”

In addition to his studies and the business, he serves as vice president for the UWF Student Entrepreneur Organization i3: Interact-Inspire-Innovate.

To other young entrepreneurs, he offers the following advice:

“Don’t be afraid of failure. Just make sure you fail forward and learn from it. The best time to start anything is right now.”