Pensacola – Vehicles have killed more than 200 bears each year in Florida since 2012, according to the Florida Fish and Wildlife Conservation Commission.

That is a marked surge from 1990 when crashes were responsible for only 33 bear deaths. Bears have become more common in recent years in suburban and urban areas as development around bear habitats has picked up and the state’s population has grown. Florida’s number of black bears has risen from about 300 in the 1970s to over 4,000 today while the state’s human population has risen from 6.7 million in 1970 to 20.3 million in 2015, according to the FWC.

Ray Eslinger, who graduated from the University of West Florida last fall, and Dr. John Morgan, an assistant professor in the Department of Earth and Environmental Sciences at UWF, have produced research that could help state wildlife officials curb those collisions in the future.

Eslinger and Morgan compiled a “hotspot analysis” that examines bear/vehicle collisions from 2011 to 2015. The report tracks bear-related auto accidents that occurred near bridges.

“(FWC) particularly wanted to focus the hotspot analysis as a way to inform what bridge structures could potentially be converted to wildlife crossing structures,” Eslinger said. “That was an initiative they had been working on with the (Florida Department of Transportation).”

Eslinger originally began working on a project that looked at whether Florida’s bear population justified the statewide bear hunt held in 2015. However, Eslinger, who is the first graduate student from UWF’s Geographic Information Science program, needed to complete a capstone project that required a client. So he decided to compile the crash data for the FWC.

Through their research, Eslinger and Morgan identified 376 bridges in the state that are near collision hotspots.

“I just think it’s really cool how FDOT and FWC are working together and they actually sought out a partnership with academia,” Morgan said. “So you have this cross-agency effort.”

Sarah Barrett, a biologist with FWC’s bear management program, said the research from Eslinger and Morgan is a follow-up to a similar study from 2012.

“We may ask for additional (bear crossing) signs, as well, depending on if he sees some major new hotspots compared to what we had in the 2012 study,” Barrett said. “But the bridges, the idea is, those could be wildlife crossings for us, like underpasses, if we put up fencing.”

Building wildlife underpasses cost about $1 million and usually are not finished until 10-15 years after they are initially approved by FDOT, Barrett said.

The next step is to try to identify the height of each bridge identified in the UWF study, Barrett said. 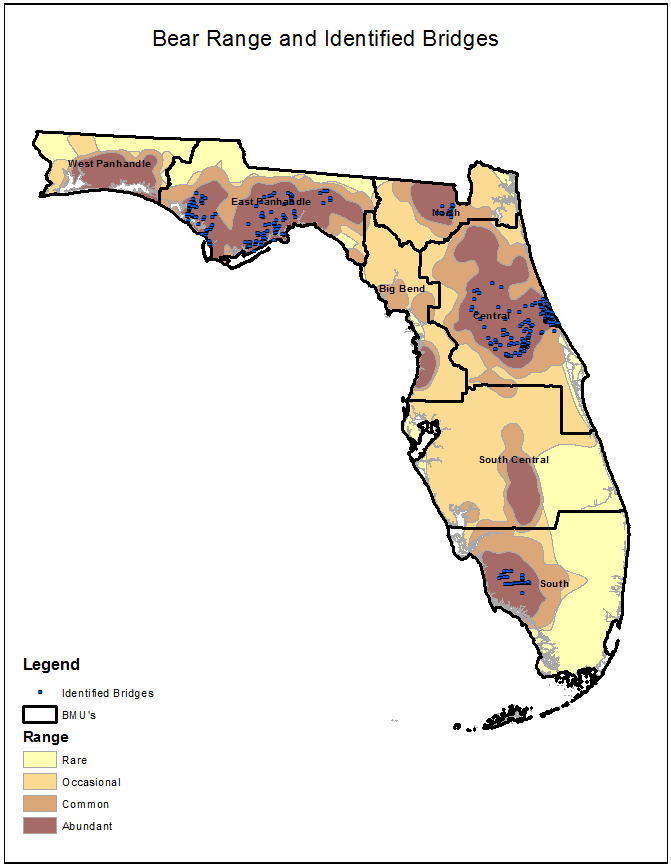 “We know how long they are, based on the data that (Eslinger) was able to acquire, but it doesn’t look like there is any available data out there right now that says how tall they are,” she said.

FWC officials will determine if the bridges are large enough for bears to use. If they are, then the agency would work with FDOT to see if they can put up fencing. If and where the fencing would be installed along roadways could also depend on whether the land is public or private, Barrett said.

About half of the bear roadkills each year occur in Central Florida in the Ocala subpopulation, Barrett said.

“But a large number of them are here in the Panhandle along (U.S.) 98 as well,” Barrett said. “That’s another spot where we see bears getting hit, by Tyndall (Air Force Base) and Eglin (Air Force Base.)”
Morgan and Eslinger presented their research at the Applied Geography Conference in Louisville, Kentucky, in October. Their study is currently under final revision for publication in an upcoming issue of the Papers in Applied Geography journal, a peer-reviewed publication.

Eslinger works for the Nassau County Sheriff’s Department as a 911 coordinator.

“I was just really grateful to the University of West Florida to give me the opportunity to go up and present at the conference and to work with FWC and FDOT,” Eslinger said. “It was just a very nice experience all the way around.”