University of West Florida President Judith Bense presented the 2015 State of the University address today, providing an update on the University’s recent accomplishments, as well as priorities and initiatives for the 2015-16 academic year. 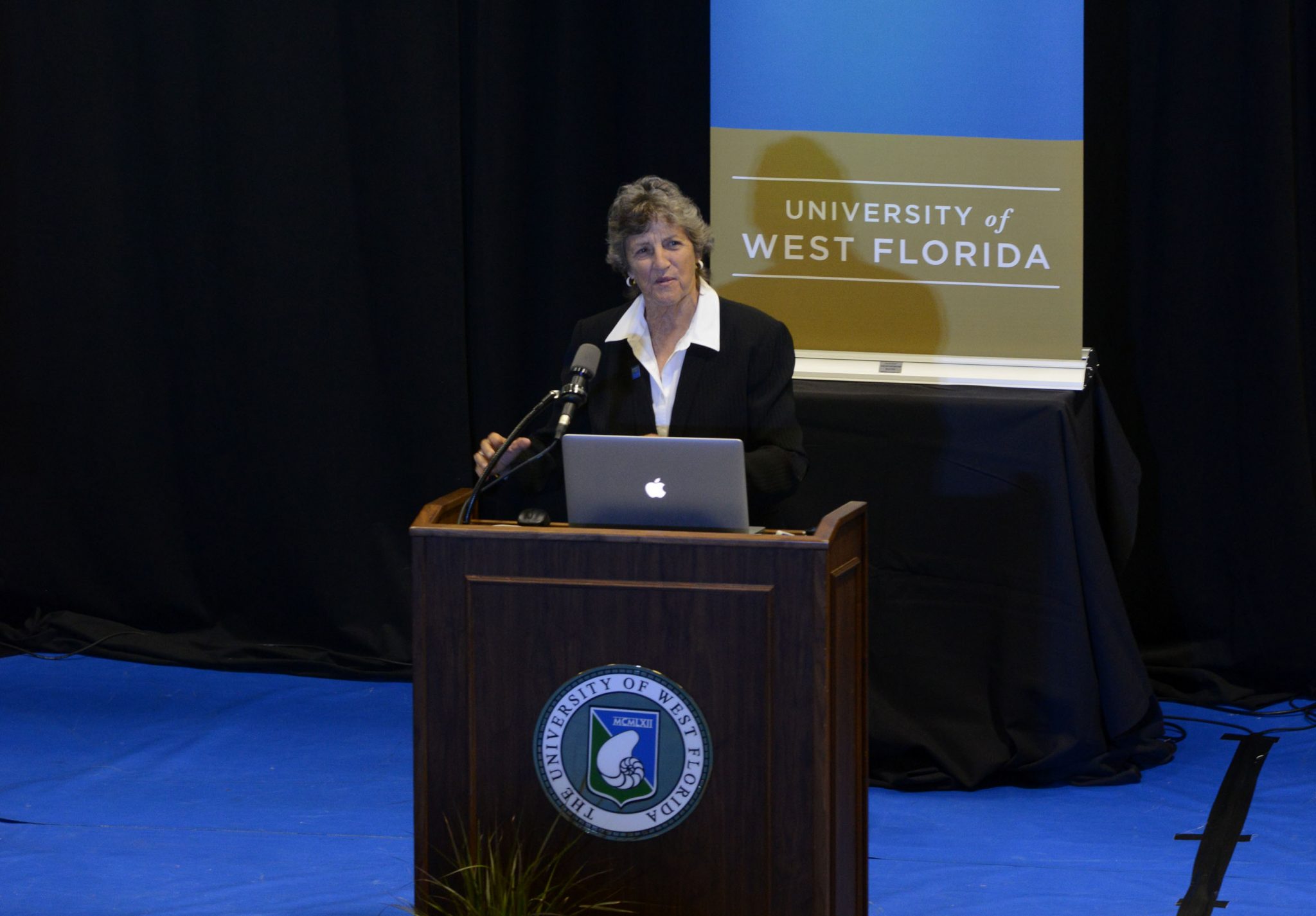 University of West Florida President Judith Bense presented the 2015 State of the University address today, providing an update on the University’s recent accomplishments, as well as priorities and initiatives for the 2015-16 academic year.

Bense began her address with a recap of University accomplishments from the 2014-15 year, including the prestigious 2015 Community Engagement Classification from the Carnegie Foundation for the Advancement of Teaching. With this honor, UWF was recognized for its effort and commitment to the community and use of resources, knowledge and research to make a positive difference in Northwest Florida and beyond.

Bense discussed the legislative outcomes from the 2015 session, which included the University maintaining its base budget with no funding cuts and additional funding for several programs including:

• $2 million for operational support
• $250,000 for military and veteran student success
• $1 million for a physician’s assistant program
• $5 million for the Office of Economic Development and Engagement
• $5 million restored for Florida Virtual Campus
• $11 million reappropriated for a new Lab Sciences Annex

The University also demonstrated its commitment to progress, Bense continued. In 2014-15, the University demonstrated significant improvement under the Board of Governors’ performance funding model. The institution made several strategic investments designed to ensure student success, including a comprehensive, centralized unit for student support services. Bense also emphasized the fluctuating nature of the performance funding model and how UWF will fair on these measurements.

“Performance funding is here to stay and we must all be focused on fulfilling our students’ needs in order to see them graduate and succeed at UWF,” Bense said. “We will continue to place an emphasis on improving these metrics moving forward.”

Bense stated her excitement about the future of UWF, particularly during the ongoing 2015-16 academic year. The UWF football team is currently in its first full year of practices and scrimmages, with four remaining scrimmages scheduled to take place this fall. The first home game will take place at Pensacola Bayfront Stadium on Sept. 10, 2016.

UWF also recently reached an agreement regarding the UFF/UWF Collective Bargaining contract negotiations for 2015-16. Both parties worked together diligently to enhance the terms of the agreement, incentivize faculty performance, and continue to ensure the success of the University. “This is an important agreement and, I believe, it will put UWF and its faculty on a stronger footing moving forward,” Bense said. The contract will be presented to the UWF BOT for ratification at the Sept. 30, 2015 meeting.

In the coming year, the University will continue to develop the Center for Entrepreneurship at the University of West Florida College of Business. The Center, which was announced in July 2015, seeks to serve as a source of support for the complete life cycle of an entrepreneur.

As Bense will retire as president in December 2016, Board of Trustees Chair Lewis Bear Jr. will be providing an update on the University Presidential Search at the Sept. 30, 2015 Board of Trustees Meeting, which is the first step in the process to select the next UWF President.